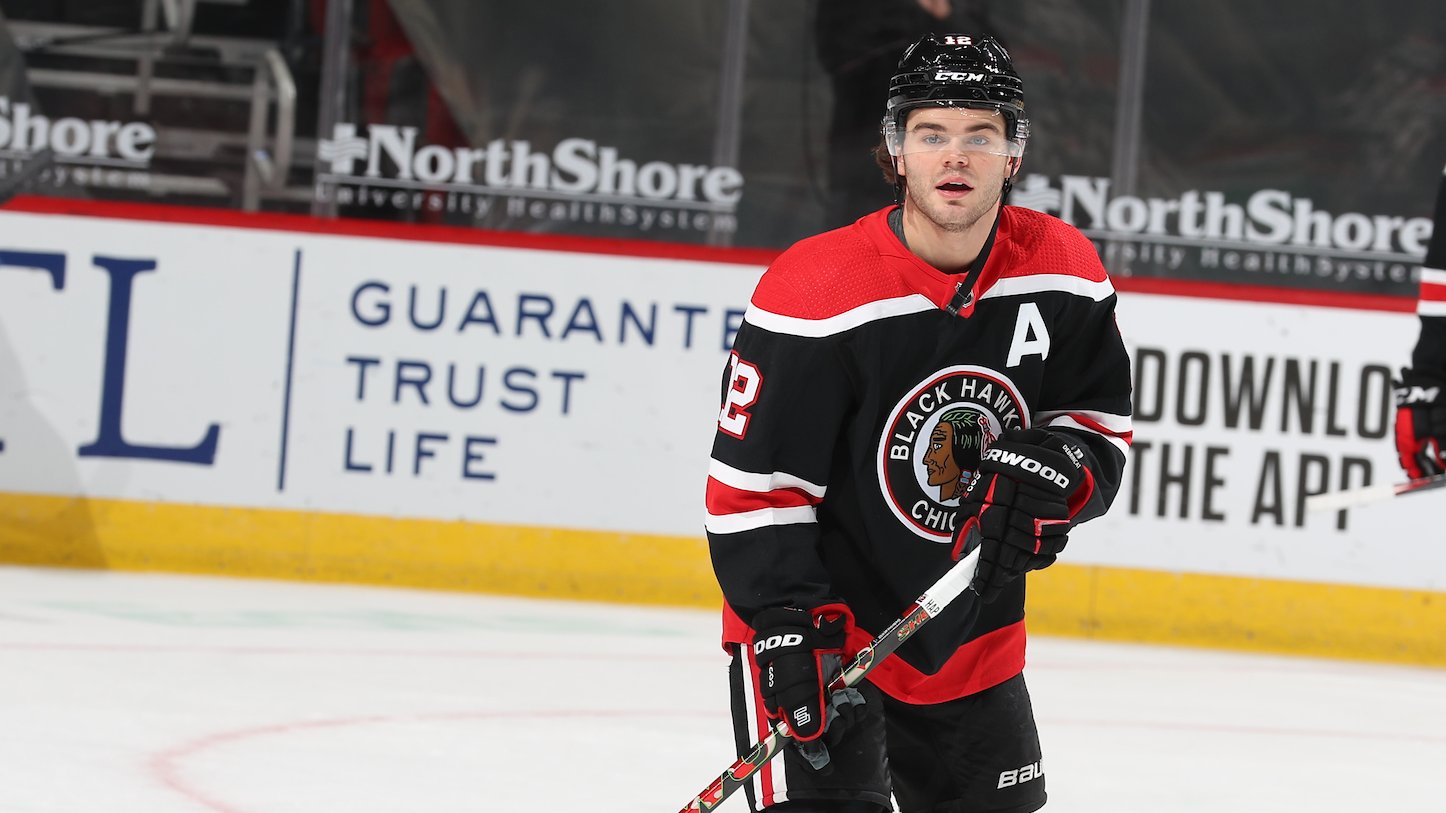 After an ugly performance against the last place Red Wings on Saturday night, the Blackhawks got another crack at their rivals on Sunday evening on national television. And the Hawks were in their reverse retro jerseys for the first time this year.

With Kevin Lankinen back in net, the Hawks looked to bounce back with a stronger performance. They were also looking to get Patrick Kane his 400th career regular season goal.

The Hawks started the game putting decent pressure on Thomas Greiss but Detroit was getting more chances. Chicago needed to get on the board and did.

Chicago was trying too hard at times to get the puck to Kane when he was on the ice. He was on the bench when David Kampf set up Nikita Zadorov, who ripped home the game’s first goal.

Zadorov’s first of the season came at 11:41 into the game.

It took almost six minutes for the next goal to be scored and it came off a Red Wings player – not stick. Ian Mitchell fired a shot that was blocked and found Ryan Carpenter. His shot appeared to hit defenseman Alex Biega in the shoulder and then bounced off the back of Greiss and into the net.

Mitchell and Matthew Highmore picked up the helpers on Carpenter’s goal.

Chicago’s two-goal lead only lasted 38 seconds. Jon Merrill unloaded a shot from that was nicely redirected by Sam Gagner past Lankinen into the net.

The first period ended with Chicago leading 2-1 but that was the only good part of the box score. Detroit out-shot Chicago 21-12 in the period; Lankinen was terrific. Chicago was only credited with three blocked shots in the opening 20 minutes.

Kane skated 7:09 in the first and wasn’t credited with a shot on net. Carl Soderberg led the Hawks with three shots on net at the end of the first period.

Duncan Keith (5:59) had the lowest ice time among the Hawks’ six defensemen in the first period.

The second period came and went without a goal but Chicago started to carry the action in the later stages of the frame. The line of Kane-Pius Suter-Alex DeBrincat had a tremendous shift with Calvin de Haan and Adam Boqvist that spent more than a minute in the offensive zone.

Over the last five or six minutes of the period the Blackhawks were on the attack but weren’t able to generate a third goal. Both teams put ten shots on net in the period and we headed to the third with Chicago still clinging to a 2-1 lead.

The Red Wings were all over the Blackhawks to start the third period but Lankinen made a few big saves in the opening 30 seconds. Chicago got a rush with Detroit going for a change and made it count.

Kane dropped the puck for Suter who ripped a shot in off the post to extend Chicago’s lead to 3-1.

Kane picked up his 22nd assist of the season on the goal; DeBrincat was credited with his 12th as well.

After the goal, which came 92 seconds into the third, Detroit kept the pressure on the Blackhawks. The Hawks were getting out-shot by a wide margin when Bobby Ryan went to the box for tripping at 6:35 into the third.

Chicago moved the puck well on the power play and Carpenter sniped home his second of the night through a great screen from Soderberg. Chicago now led 4-1.

DeBrincat picks up his second assist of the night on Carpenter’s second goal. Boqvist had the second helper on the goal.

Two minutes later, Kane got the puck, allowed a defenseman to slide out of his way and ripped home his 400th career regular season goal.

DeBrincat collected his third assist of the night on Kane’s milestone goal.

Three minutes later with Kampf in the box, Evgeny Svechnikov beat Lankinen to cut the score to 5-2 in favor of the Blackhawks.

The Hawks weren’t going to let the Wings hang around. Two minutes after the Red Wings scored, Brandon Hagel fought for a puck and found Dominik Kubalik to get Chicago’s sixth goal of the night.

Hagel picked up the only helper on Kubalik’s eighth of the season.

With 4:37 left in regulation – 69 seconds after Kubalik’s goal – DeBrincat added a goal to his three assists.

The extra point made it 7-2 in favor of the Blackhawks and Greiss blasted the post with his stick, shattering the tool that had apparently let him down seven times in the game.

Kane and de Haan picked up the assists on DeBrincat’s goal.

Lankinen stopped 43 of 45 in a stellar performance. DeBrincat’s four points will be overshadowed by Kane’s 400th goal but he was marvelous the entire night.

DeBrincat led Chicago with five shots on net. Kane had one goal and two assists.

Suter won 10 of 17 faceoffs in the game and finished plus-three.

The five-goal outburst in the third period was exceptional. The entire roster was rolling in the final ten minutes of a period that started with them getting out-shot badly. Detroit out-shot the Hawks 15-10 in the third but half of the Blackhawks shots went in.