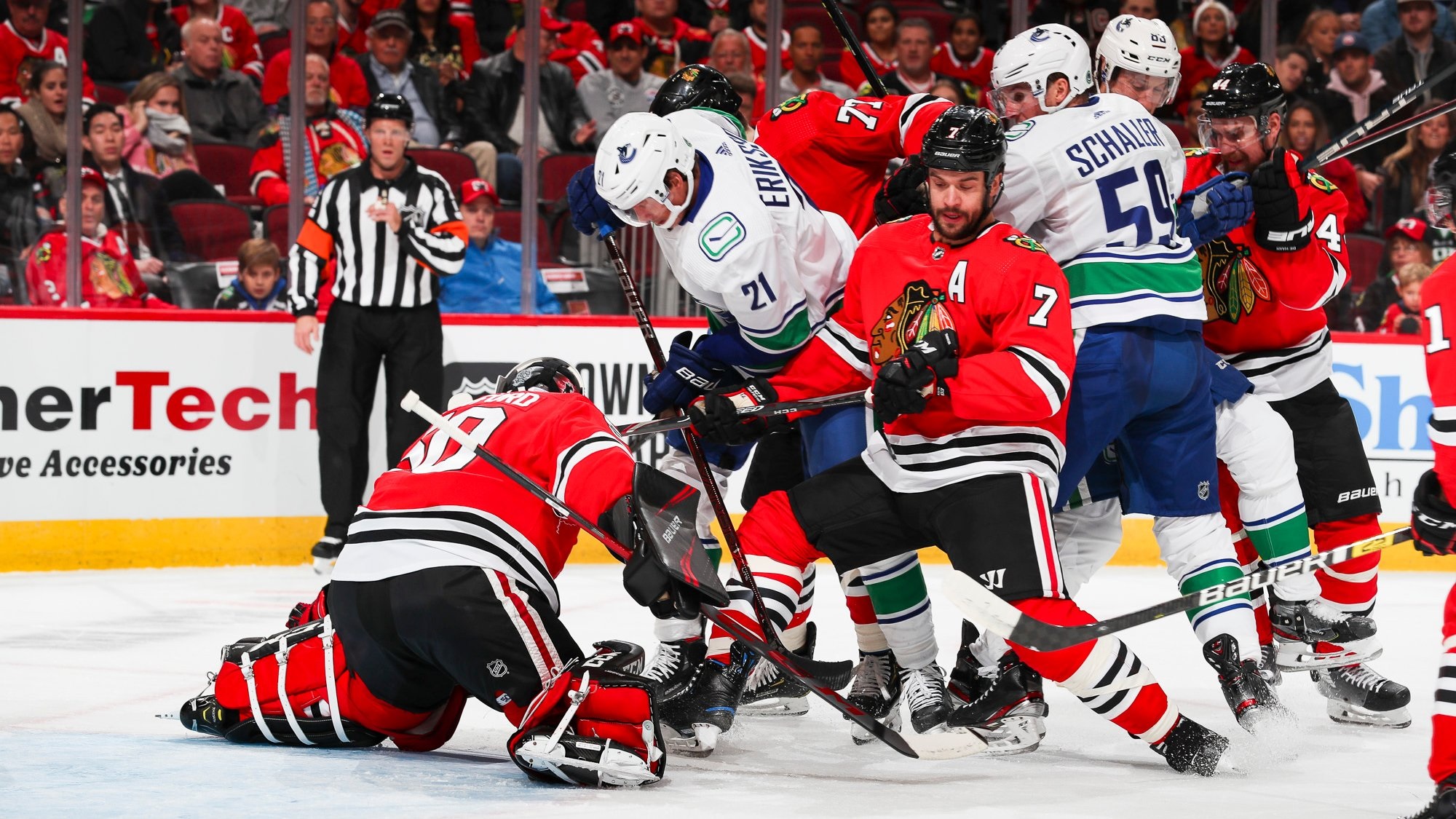 The Vancouver Canucks ventured into the United Center on Thursday night with a 9-3-3 record, among the best in the Western Conference.

The Blackhawks, meanwhile, have had the look of a team headed for a top-three draft pick. And, after most of Chicago wrote a “fire Jeremy Colliton” post on the anniversary of him replacing Joel Quenneville, the Hawks’ head coach opted to dress Zack Smith over Dominik Kubalik for the game.

With that as the backdrop, the Blackhawks came out and dominated the opening 20 minutes of action. It was evident from the first shift that the Hawks were going to get as many pucks on net as possible after they have been rightfully hammered for their shot differential all season.

In a stunning turn of events, getting shots on net led to goals. Alex DeBrincat scored this highlight reel goal to start the scoring 6:41 into the contest.

Dylan Strome and Patrick Kane picked up the assists on DeBrincat’s fifth of the season.

The Hawks kept shooting but didn’t score again until this nice passing sequence on a power play late in the first resulted in a goal from Andrew Shaw.

The assists on Shaw’s goal went to: Strome and Kane.

Another assist passes Tocchet for sole possession of 99th with 953

After Colliton heard boo’s after he was introduced to start the game there were some cheers after 20 minutes. Even though both teams were credited with 17 shots on net, the Hawks held the 2-0 lead.

J.T. Miller scored a power play goal 62 seconds into the second period to cut the lead in half.

Vancouver out-shot the Hawks 12-10 in a sloppy second period but Miller’s goal was the only marker. Corey Crawford was facing a lot of rubber again (29 shots in 40 minutes) but was getting it done.

The Canucks did a terrific job of letting undisciplined play benefit the Hawks the entire night. Alexander Edler took a high sticking penalty at 8:29 into the third. J.T. Miller served a minor penalty in all three periods, the third of which came at 14:09 into the third.

With Miller in the box the Hawks took advantage. For the first time in 15 games the Chicago Blackhawks scored multiple power play goals in a game. This one came off the stick of Kane with Strome parked in front of the net.

Strome added his third assist of the night on the Kane PPG.

Nothing can ever be easy, though. Drake Caggiula went to the box 70 seconds after Kane scored, giving the Canucks another opportunity with an advantage.

Vancouver pulled Jacob Markstrom with 2:43 left in regulation. While Markstrom was off, Olli Maatta hit David Kampf in the stick with a pass and it found its way into the empty cage for Chicago’s fourth goal of the evening.

With 61 seconds remaining Edler ripped a shot from just inside the blue line. Jake Virtanen tipped the shot past Crawford to cut the lead back to two.

Brandon Saad flipped a puck into the empty net with five seconds left in regulation to make the final score 5-2.

Crawford stopped 37 of 39 in a very good performance.

Three defensemen – Adam Boqvist, Erik Gustafsson and Calvin de Haan – were credited with three shots on net each. de Haan was also credited with a team-high five hits in 22:13.

Jonathan Toews had a season-high six shots on net and won seven of 17 faceoffs. Strome won only three of 15 draws.

It also ends up as the #Blackhawks winner, as Kane passes Cam Neely, Jarome Iginla & Marian Gaborik for the 7th most career game winning goals by a primary right winger at age 30 or younger (62) https://t.co/efSLTwV6oJ