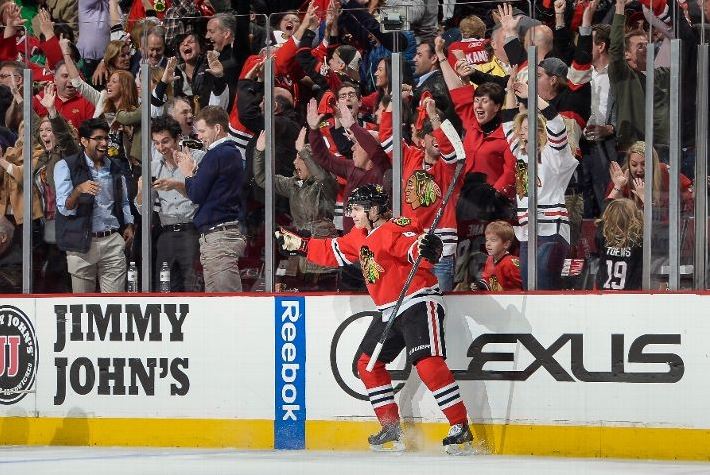 There have been times over the last six years when Patrick Kane has taken over an entire game and personally willed the Blackhawks to victory.

Wednesday night was one of those games, and Kane reminded the hockey world he’s one of the game’s special talents. Kane scored twice, including the overtime game-winner, and added an assist as the Hawks pulled even in the series with the Blues. After looking tentative in the first couple games of the series, Kane was flying on Wednesday night. He skated 21:36 in the game, and once again showed the dramatic touch that has made him a star.

Johnny Oduya made a fantastic pass to set up Kane’s first goal, and the game-winner came after Ben Smith found Kane accelerating up the ice.

Andrew Shaw started the scoring for Chicago with a power play goal at 8:40 into the second period. Kane put the Hawks up 2-0 with just under four minutes left in the period, but the Blues scored twice in the final 70 seconds to tie the score through 40 minutes.

Vladimir Tarasenko, who has dominated the Hawks this entire series, scored his second goal of the game and fourth of the series at 12:26 into the third period to give the Blues a brief lead, but Bryan Bickell tied the game less than four minutes later.

And, again, the Hawks and Blues decided a game in overtime.

This time, however, Kane finished things off and the third 4-3 overtime final of the series favored the Hawks.

Bickell was a beast once again, this time playing most of the night with Jonathan Toews and either Kane or Marian Hossa. He was credited with seven hits in over 18 minutes of ice time and looked like the player that earned a big raise after the 2013 playoffs.

Corey Crawford made 30 saves, the majority of which came in the second and third periods as St. Louis came back. Ryan Miller also made 30 saves, but allowed four goals in the loss.

The Hawks once again spent too much time short-handed, taking five penalties in the game. St. Louis converted only one of their power play opportunities, while the Hawks were successful on one of only two advantages in the game.