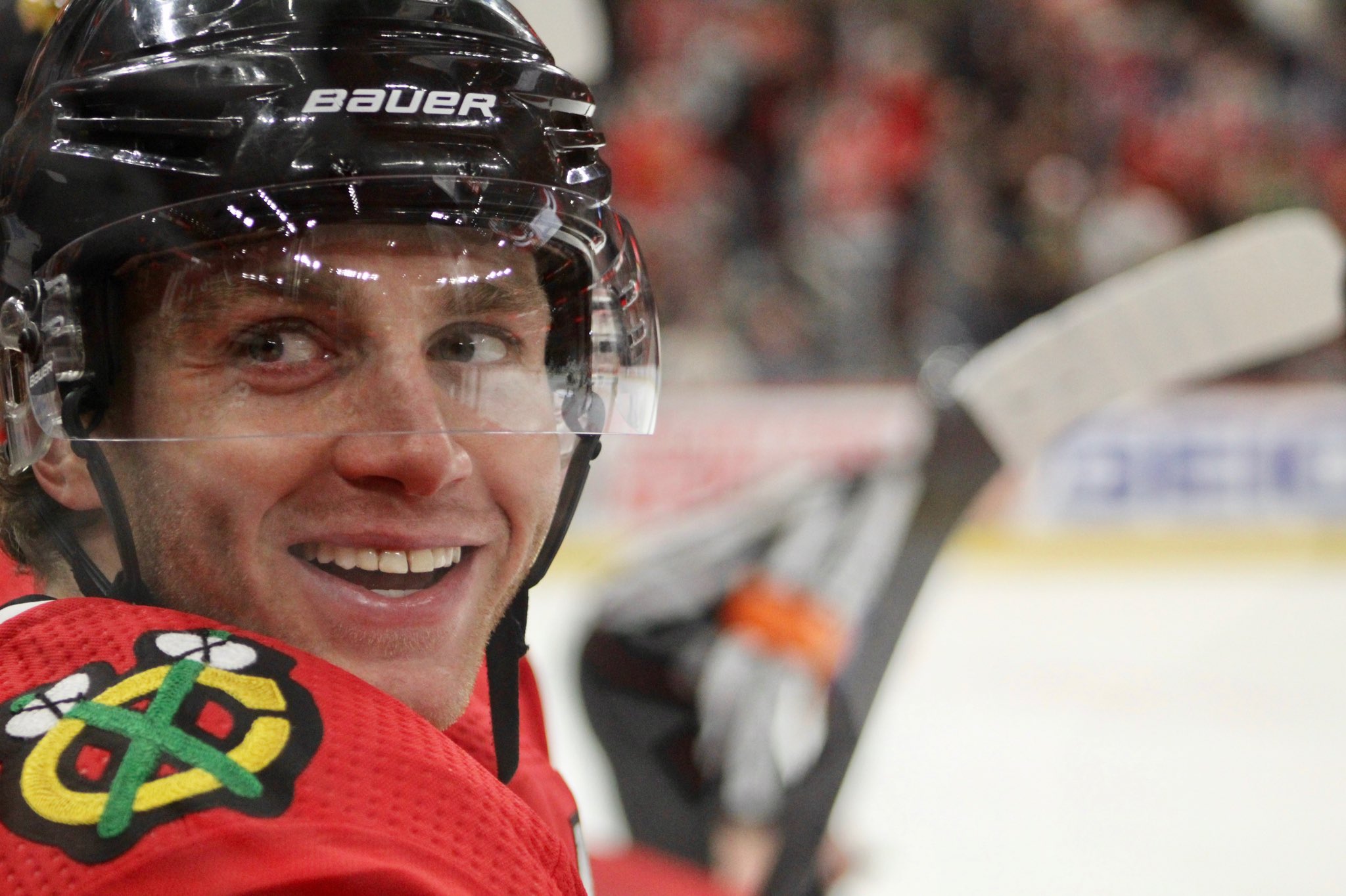 Every once in a while the Blackhawks put a smile on your face for longer than 20 minutes.

After an ugly, soul-crushing loss in St. Louis on Saturday the Hawks had a Minnesota team waiting for them at the United Center on Sunday evening. Fans and media were calling for Jeremy Colliton’s job (and Stan Bowman’s for that matter). The pitchforks and torches were out.

So the Hawks brought out Kris Versteeg for his one last shift before the national anthem. Steeger spun on his knees and fist bumped the bench with big smiles from his former teammates. A guy who was so much fun to watch in his stints with the team is heading for an early retirement but his smile brought a warm energy to the ice. It was good to see Steeger back in the Indian head.

A memorable One More Shift for Kris Versteeg. #Blackhawks pic.twitter.com/q88ygAysmn

The Versteeg moment didn’t overshadow Colliton throwing his lines in a blender, however. Alex Nylander, whose recent performances have been blasted by most of the media in Chicago and whose awful turnover handed the Blues their first goal on Saturday night, somehow found himself… promoted onto a line with Patrick Kane and Dylan Strome.

Of course that line would click. Nylander found Kane to the side of the net. Kane hammered a shot into Minnesota goaltender Kaapo Kahkonen that he thought went in; the closest official did not see it that way and play continued. At the next stoppage of play, however, New York asked for a moment and reviewed the play. The puck was found to have completely crossed the line and Kane was awarded his 16th of the season.

Nylander was credited with the only assist on the goal.

Four minutes later the Blackhawks were on the power play. Kane received the puck and rifled a shot home for his second goal of the night.

Jonathan Toews and Strome picked up assists on Kane’s 17th of the season.

Kirby Dach went to the box 10 seconds after the Kane goal and Minnesota capitalized on the advantage. Eric Staal scored a power play goal for the 1,000th goal of his tremendous NHL career.

The Blackhawks apparently aren’t comfortable having a lead for very long, unfortunately. Kevin Fiala scored two minutes into the second period to tie the game. And, to a fan base that has watched leads evaporate since the beginning of October, it felt like the Wild were about to run away with the game.

David Kampf scored six minutes later to give the Blackhawks a 3-2 lead.

The redirect of a Connor Murphy shot was the fifth of the year for Kampf. Murphy had a terrific night and was credited with one of the assists on the goal; Erik Gustafsson was also credited with a helper.

Fiala scored his second goal of the period to once again tie the game at 14:20 into the second. Ryan Suter had the only assist on each of Fiala’s goals (he also had an assist on Staal’s goal in the first period).

After 40 minutes the score was tied at three. Minnesota held a 20-19 shot advantage.

The clock continued to roll in the third period without any score. Finally, Brandon Saad redirected another Murphy shot into the net at 13:43 and Chicago had a 4-3 lead.

Toews and Murphy each picked up an assist on Saad’s 11th of the year.

Robin Lehner held onto the lead until the Wild pulled Kahkonen for the extra attacker in the final two minutes. With 63 seconds left in regulation Toews found Kane and the hat trick was complete.

Suter did a pretty good job of blocking a previous Kane attempt at the empty net from outside the blue line but this one found the mark for the sixth career hat trick for Kane.

The Blackhawks were able to hang on and win the day, coming back from a disaster in St. Louis with a solid home victory.

With his three goals on the night, Kane passed Eric Lindros on the career goals list. He also moved three points ahead of Sidney Crosby for the NHL’s point lead in the decade; Crosby is currently on the shelf for the Penguins.

Toews was one of the bright spots on Saturday night and he backed up that strong performance with another good night on Sunday. Chicago’s captain was credited with three assists, two takeaways, one hit and won 14 of 17 faceoffs in only 16 minutes of ice time.

Murphy was terrific on the blue line. He skated 24:58 with two assists – both shots that were redirected into the net. He also blocked three shots and was credited with two hits.

Adam Boqvist appeared in his tenth game of the season, burning the first year of his rookie contract. Boqvist and Dach will stay with the Blackhawks and not join their respective home countries for the World Junior Championships.