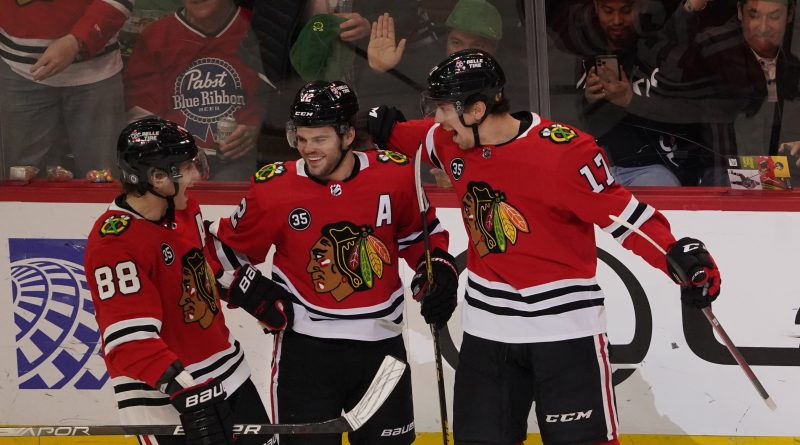 In their last game, the Blackhawks played as good a first period as they had in some time. Maybe this entire season. But a couple unfortunate bounces and a few big (lucky?) saves and Chicago only took a 1-0 lead to the room after a strong effort for 20 minutes against the Lightning.

It took the Blackhawks only 98 seconds to get on the board in this one. Coach Derek King put the Alex DeBrincat-Dylan Strome-Patrick Kane line back to work and they flexed early and often.

Less than 90 seconds after Strome’s first goal, the Blackhawks got a power play and it looked like they were going to have that close-but-no-cigar luck once again. A few good looks went wide. DeBrincat whiffed on a chance. And, with the young skill on the Ducks’ roster and the way this season has gone for the Blackhawks, a little part in the back of your mind wondered if this was going to be a replay of the Tampa game.

The Anaheim Ducks are not the Tampa Bay Lightning. And John Gibson is not Andrei Vasilevskiy.

DeBrincat scored at 7:05 to make it 2-0 Hawks. Kane and Strome with the assists.

Kane scored at 13:53 to make it 3-0 Hawks. DeBrincat and Jake McCabe with the assists.

And with that, Patrick Kane had four points in less than 18 minutes of hockey.

Chicago wasn’t done for the period. Brandon Hagel and Jonathan Toews worked a perfect passing sequence and Toews finished the short-handed goal to give the Blackhawks a 5-0 lead at the end of the first period.

The shots were 13-6 in favor of the Blackhawks. And the night was over for Gibson, who was replaced in net by Anthony Stolarz. Anaheim thought maybe changing goaltenders would change the momentum in the game.

They were wrong. Hagel scored 19 seconds into the second period to give the Blackhawks a 6-0 lead.

And, for 24 minutes, the Blackhawks had as many goals in the game as Anaheim had shots on net. The effort was ugly, brutal, pathetic, fill in the blank with your favorite word for craptastic from the Ducks.

But we aren’t allowed to have nice things in Chicago this season. Not for long, anyway. So even a six-goal lead felt somewhat uncomfortable.

Trevor Zegras scored a power play goal at 7:19 and then Adam Henrique scored 38 seconds later and suddenly, in less than four minutes, a six-goal lead was cut to three.

The Blackhawks had clearly taken their foot off the gas, and it showed. And Anaheim, to their credit, showed some push despite getting their asses kicked hard for the first 21 minutes of the night.

It felt like the next goal was going to be huge. Thankfully, that next goal came from Strome, giving the Blackhawks a 7-3 lead with 5:10 left in the second period.

When the dust settled after a second period that was a hot mess for both teams, the Ducks had out-shot the Blackhawks 19-7 in the period. King ripped his team a new one in the second intermission; they are clearly not good enough to take their foot off the gas against anyone at any time.

Chicago came out and did a much better job of settling the action down. The teams had covered the over to start the game and the adjust over (8.5) after the first period with the five-goal second. So the bettors were happy, the fans in attendance were happy, the viewers at home were happy and potential trade partners for Kyle Davidson were paying attention.

It took more than 17 minutes for either team to get on the board in the third period, but you might be able to guess where the next goal came from. Kane to Strome — again.

The hat trick for Strome was great to see. And his fifth assist of the night gave Kane his first career six-point game. DeBrincat added an assist to give him a four-point night as well.

The DeBrincat-Strome-Kane line had 14 points combined in the game. FOURTEEN.

This was the third consecutive multi-point game for Strome, who now has 15 goals on the season. He also won 11 of 14 faceoffs in the game. Strome has been fantastic since his most recent trip to the press box and has legitimately opened the door for questions about him staying in Chicago — not in the coach’s dog house.

Kirby Dach didn’t factor in the scoring but this was a really good game for him. He had terrific energy, made good decisions with the puck and was on the attack most of the night. This was the player fans have been begging to see more consistently since the bubble. He was playing the wing with Hagel and Toews (maybe someone paid attention to me begging for that line for a couple months?) and that line was solid.