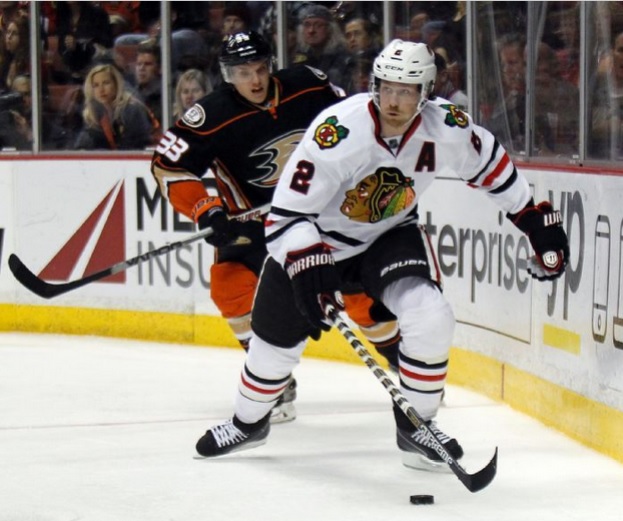 Duncan Keith picked up his 400th career point and Patrick Sharp picked up three assists as the Blackhawks rebounded from a mediocre third period in Los Angeles with a dominant effort to beat the league-leading Anaheim Ducks.

A bad Ryan Kesler turnover ended up on the stick of Patrick Kane who continued his lethal play. Kane found Jonathan Toews and Chicago’s captain opened the scoring with his 15th goal of the season at 5:30 into the opening period.

Keith deposited his seventh of the season to reach a career benchmark in the middle of the second period, only 60 seconds after an awful power play came to a close. Less than six minutes later, Sharp found Kane and Chicago’s Hart candidate scored his 24th of the season to extend the lead to three.

The puck was an adventure all night, and Corey Crawford had his hands full just trying to judge where dump-ins would go. Luckily for him, the Hawks dominated the play in the opening 40 minutes and his teammates were able to keep the puck out on a couple occasions when he wandered away from the blue paint.

In the game’s opening two periods, the Hawks out-shot the Ducks 27-14.

In the middle of the third, the Blackhawks put themselves into a tough spot. With Andrew Shaw already in the box, Niklas Hjalmarsson was sent off for tripping and Anaheim had a two-man advantage for 25 seconds. Crawford made a big save as the Shaw penalty expired, however.

On the Hjalmarsson penalty, however, Corey Perry made a nice pass over an outstretched Brent Seabrook to a wide open Rickard Rakell who broke up the shutout. But Sharp found Kane for another Hawks goal to push the lead to 4-1, where the score would end.

Sharp’s four assists move him past Eric Nesterenko into 15th on Blackhawks career points list with 498 in the Indian Head. Kane’s three points push him into second in the league, only two behind Philadelphia’s Jakub Voracek.

Crawford only faced 22 shots, but had to make a number of tough saves to earn the victory.

With the Hawks heading to San Jose for another game on Saturday night, the strong performance gave coach Joel Quenneville the confidence to spread out the ice time. Kane led Hawks forwards in ice time, but skated only 17:44 in another stellar performance.

Hjalmarsson led the team in ice time, but only skated 22:28 in the game. He was credited with a team-leading four blocked shots, one hit and two takeaways, and could have picked up at least one save while Crawford was under Ryan Kesler during the second period.

Brad Richards won seven of ten faceoffs and picked up an assist with four shots on goal. Michal Rozsival skated 18:30 and led the team with five hits.