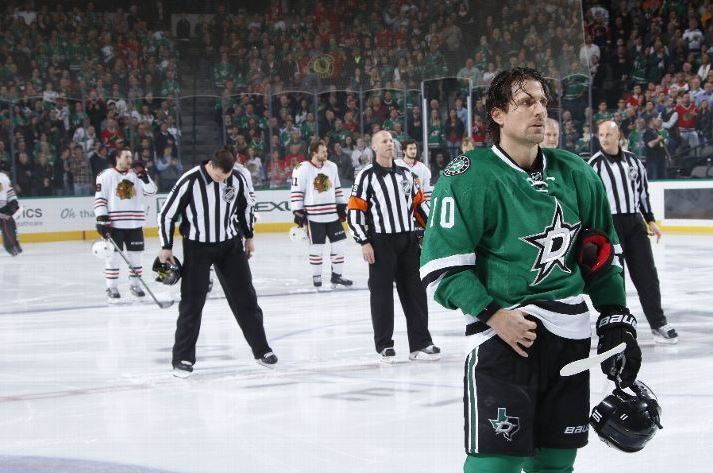 Seeing them in a Dallas sweater didn’t generate anywhere close to the amount of emotion that seeing Patrick Sharp in green did for Blackhawks fans.

Through the first 40 minutes of the game, the teams were playing fairly close. Dallas led 1-0 on a Jason Spezza power play goal, but the credited shots were 17-15 in favor of Chicago. Both teams had a couple power plays, and the Stars were able to convert on one of theirs. Sharp was credited with an assist on Spezza’s goal.

But the entire complexion of the game changed on the first rush of the final period.

When Sharp scored 12th goal of the season just 11 seconds into the third period, he gave the Stars momentum and breathing room.

The last time Sharp scored against the Blackhawks was on Feb. 24, 2004 when he was with the Philadelphia Flyers.

Colton Sceviour redirected a Jordie Benn shot through Crawford at 2:57 into the third and the wheels were off. Chicago chased the rest of the way, but a three goal deficit against on the road against the division leading Stars was simply too much.

When Mattias Janmark scored to extend the lead to 4-0, the Hawks were five short minutes away from Christmas and played like they were already on the plane back to Chicago.

For good measure, Oduya picked up an assist on the Janmark goal.

And Niemi was credited with the shutout.

Dallas completely dominated the Blackhawks in the third period. Chicago was credited with three shots on goal in the third while Dallas put 16 on net. The first goal Crawford allowed was terribly soft, but the skill up and down the Stars lineup showed up as they beat him from every angle in the third to blow the game open.

Crawford stopped 27 of 31 in the loss. Andrew Shaw was the only Chicago player credited with more than one hit, and Andrew Desjardins led the way with four blocked shots.

Marian Hossa and Marcus Kruger were both absent from the lineup again, which meant more Artem Anisimov and Teuvo Teravainen on penalty kill duty. Phillip Danault actually played a decent game and saw some PK work in the third period.

Unfortunately for Chicago, the night was not without injury. Rob Scuderi took a redirected shot to the face around 12 minutes into the third period. He dropped hard and there was blood on the ice. Scuderi was able to skate off but he needed repairs and went to the room immediately.

Chicago heads to the break ten points behind Dallas in the division. The Blackhawks are back at the United Center to host Carolina on Sunday.