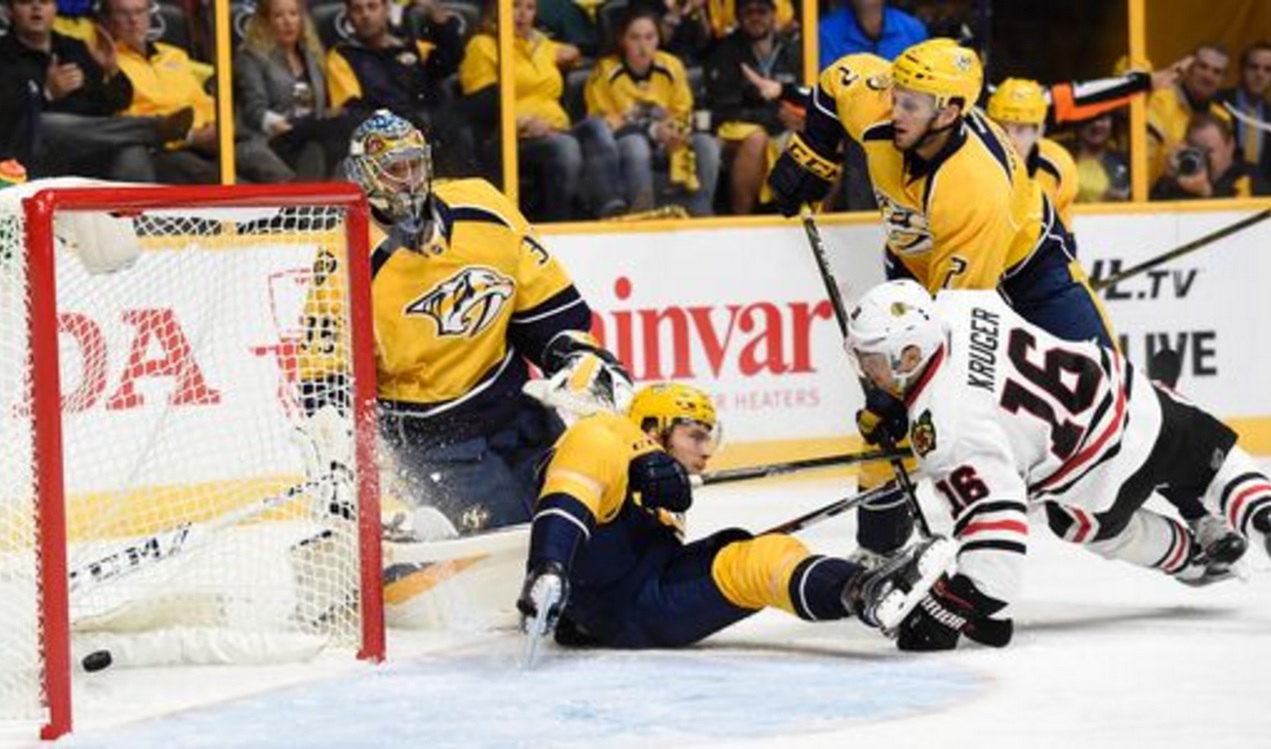 The Blackhawks penalty kill sucks, and they got plenty of work on it Friday night in Nashville.

The game actually started fairly well for the Hawks. Marian Hossa, skating on the third line to open the night, tried to hit Ryan Hartman for a breakaway but the puck was just out of Hartman’s reach. The action pushed the puck towards the net, however, and Marcus Kruger followed the play and tapped in his first goal of the young season.

Unfortunately, the next shift for that line would be the last of the night for Hartman. He got tangled up with Corey Crawford and struggled to get back to his feet, and then blocked a shot while already playing on one leg.

Hartman in a huge discomfort, yet manages to block a P.K Subban shot. pic.twitter.com/xlrgrnIYiA

After Hartman left, all of the glaring issues that plagued the Blackhawks on Wednesday night returned. Penalties, more penalties and power play goals for the opposition.

Brian Campbell went to the box at 6:18 for interference, and the Preds took advantage. PK Subban scored the first goal of the season for his new team.

Niklas Hjalmarsson would give the Blackhawks the lead once again 2:05 after the Subban goal, but the lead would again be short-lived.

Jonathan Toews went to the box for holding the stick of Mattias Ekholm at 15:06 and Nashville cashed in again. This time, Roman Josi made the deposit for the game-tying goal. The goals by Subban and Josi were the first for both on an opening night.

Nick Schmaltz also went to the box late in the first period, a penalty that carried over for 29 seconds into the second period. But, just for the heck of it, the Hawks killed that penalty.

The middle stanza saw the parade to the box continue.

Early in the second, Anthony Bitetto gave Patrick Kane a hard time in the corner and Jordin Tootoo stepped in on his next shift. The two dropped the gloves and, unfortunately, Bitetto’s head appeared to hit the ice as the two went down. He was helped to the room and did not return.

Only 43 seconds after the Tootoo-Bitetto fight, Artem Anisimov went to the box for hooking Ryan Ellis. The Blackhawks successfully killed a second penalty, bringing their PK percentage back to .500 on the night.

A little more than 10 minutes into the second, James Neal whacked Toews in the face with his stick behind the play. Nothing was called, and Neal continued to get his money’s worth at the expense of Chicago’s captain behind the play. Toews finally had enough and fought Neal, officially cancelling his Lady Byng campaign.

At exactly 16 minutes into the second, Anisimov went to the box again for a delay of game call. Mike Fisher scored 36 seconds later to give the Preds a 3-2 lead. Ryan Johansen had assists on each of the Preds’ three goals through two periods, while Josi and Fisher had two points each through 40 minutes.

The Blackhawks killed only two of five Nashville advantages in the opening two periods, and piled up 20 penalty minutes. Given that Hartman skated only two shifts, having one of your 11 remaining forwards in the box for 14:29 of the 20 minutes in the second period is a certain recipe for disaster.

Chicago was credited with 11 shots on goal in the first two periods – combined. Nashville had that many in the first period.

Discipline continued to plague the Blackhawks in the third. The Hawks got a power play 11:23 into the third, but Brent Seabrook was whistled for closing his hand on the puck (delay of game) only 18 seconds into the advantage.

Four seconds before Seabrook’s penalty expired, PK Subban – who got into it with Toews on his previous shift – smacked Kane in the face. Kane sold the hell out of it, and got a penalty called… on Subban and himself. Subban went for roughing and Kane got a matching two minutes for the flop.

Kane spending two minutes in the box with only six minutes and change left in regulation doesn’t help the Hawks’ chances of coming back.

Chicago picked up the pace considerably in the final six minutes, but Pekka Rinne was incredible. With two minutes left in regulation, he robbed Vinnie Hinostroza on the doorstep to maintain the lead, but Subban went back to the box for interfering with Hossa. Crawford went to the box for a 6-on-4 with 1:46 left on the clock.

Vintage Rinne continued to erase good chances for the Hawks with Subban in the box and the final horn came before an equalizer. The Blackhawks fell to 0-2-0 on the season, and have allowed six power play goals in two games.

These two teams will go back at it on Saturday night at the United Center.