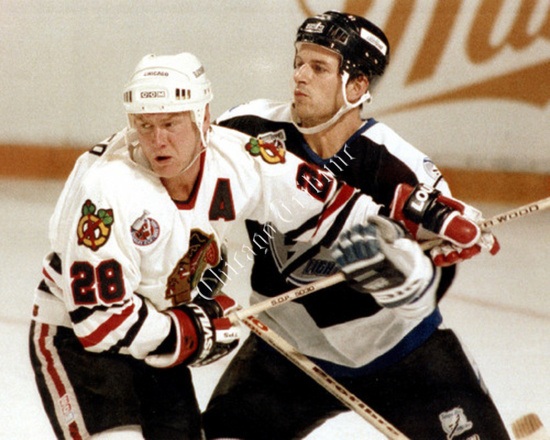 This page is to serve as a petition for the Chicago Blackhawks to retire sweater #28, permanently honoring Steve Larmer as one of the greatest players in franchise history.

Click here to read a great essay about Larmer by Chris Chelios on Blackhawks.com.

Click here to view some great photos of Larmer that were posted on Blackhawks.com on Oct. 1, 2012.

Not only should his number hang in the rafters next to his linemate, Denis Savard, but Larmer should be in the Hockey Hall of Fame. For the case for his Hall of Fame status, read here.

Here is why the Blackhawks should retire Larmer’s number:

He is the franchise’s all-time career leader in:

He also ranks in the organization’s Top Ten in the following (regular season):

In the postseason, Larmer ranks:

He ranks 38th in team history in penalty minutes.

8 Chicago Blackhawks have won the Calder Memorial Trophy as NHL rookie of the year since 1926. Larmer is one of them.

He didn’t miss a game for a decade. His 884 consecutive regular season games is an NHL record with a single franchise.

He played in the postseason after every season he was a member of the Blackhawks.

To voice your opinion, saying the Chicago Blackhawks should retire Steve Larmer’s #28, here’s what we want you to do:

When we get a strong enough number on this page, we’ll present it to the Blackhawks organization for their consideration. Let’s go!