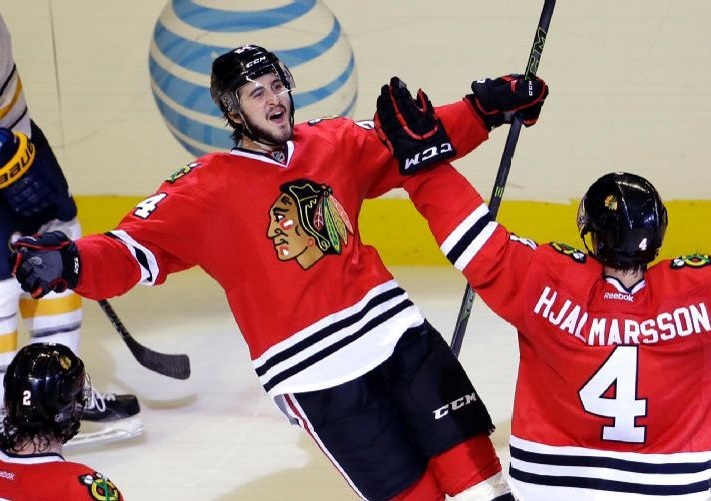 The Blackhawks stayed hot on Friday night, and rookies continued to play a huge role in the team’s winning streak.

Buffalo outplayed the Hawks for most of the first period, but inside the final two minutes a smooth passing play that involved almost everyone wearing red on the ice ended with Niklas Hjalmarsson scoring his second goal of the season. The passing sequence that set up the goal momentarily frustrated Hjalmarsson, who admitted between periods that he wanted a pass directly from Jonathan Toews. Chicago’s captain passed to defenseman Erik Gustafsson instead, but the rookie made a strong, quick pass to Hjalmarsson who was attacking up the middle of the ice and he could pick his spots.

Chicago picked up the pace in the second period but neither team scored. Without the benefit of a power play, the Hawks put 19 shots on net in the middle frame; Buffalo had one two-minute advantage with Hjalmarsson in the box but failed to capitalize. The Sabres were credited with 12 shots in the second, but the scoreboard continued to show 1-0 in favor of the home team.

As he has throughout his career, Ryan O’Reilly had another strong night. He tied the game 11:37 into the third period, his 17th of the season. The trade sending him to Buffalo over the summer didn’t receive a lot of headlines outside of the two impacted markets, but that may have been the best single trade of the summer in the entire league. O’Reilly had another really good night for Buffalo, winning 17 of 26 faceoffs in the game as well.

The last seven minutes of the third belonged to the Hawks, though. And another rookie, Phillip Danault, made the biggest impact of the night.

Danault broke the tie and scored the eventual game-winning goal at 15:01 into the third. It was the first goal of Danault’s NHL career, making him the seventh Blackhawks player to score his first career goal during the 2015-16 season.

Toews added his 15th of the season into an empty net to close the books on a 3-1 victory.

Chad Johnson was impressive between the pipes for Buffalo, stopping 42 of 44 in the loss. Corey Crawford picked up another win, making 28 stops against 29 shots along the way. Chicago killed both Buffalo power plays in the game; the Hawks’ power play failed in its only advantage.

Toews had two points, Duncan Keith picked up two assists and Hjalmarson also had a multi-point evening in the win.

But the story continues to be the impact coming from Chicago’s youngsters. On a night that saw the Hawks’ powerful second line get shut out, Danault and Gustafsson played important roles in the victory. Danault now has five points (one goal, four assists) in 10 games with the Hawks this season, while Gustafsson picked up his fifth assist in 11 contests.

Another young player who had a solid night was Trevor van Riemsdyk, who led Chicago with four blocked shots. He started the game paired with Brent Seabrook and was also credited with two shots on net and one hit in 15:15.

Bryan Bickell didn’t impact the box score in eight shifts (5:33). With Richard Panik reportedly close to joining the team – potentially as early as this weekend, according to Joel Quenneville before the game – Bickell’s play could make him the 13th forward soon.

Ryan Garbutt was also held under six minutes of ice time in the game but was at least noticeable on the ice. He showed great speed, saving an icing early in the game, and was credited with a team-high three hits while skating only 10 shifts.

Patrick Kane was held without a point but led Chicago with nine shots on net against his hometown Sabres.

At the end of Friday night’s action, the Blackhawks’ six-game winning streak makes them the hottest team in the Western Conference and now sit only six points behind the Dallas Stars in the Central Division. The Hawks host the suddenly-hot Colorado Avalanche at the United Center on Sunday. Colorado has won three straight, and are tied with Nashville at 45 points (the Predators have one game in-hand).