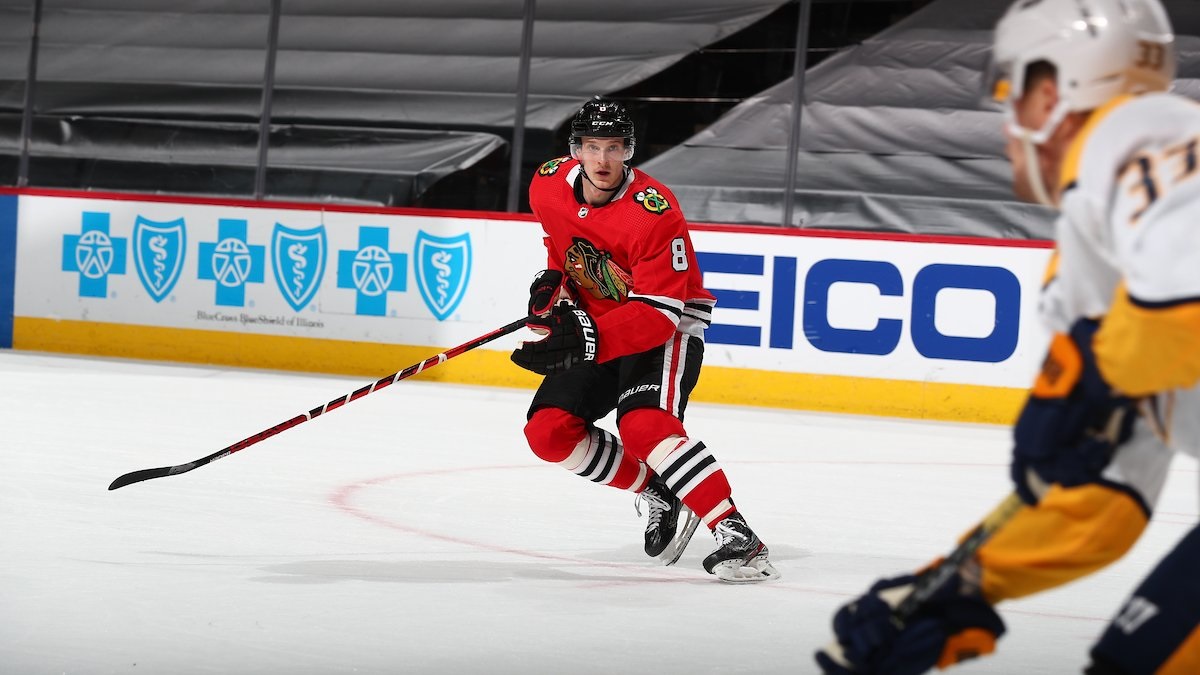 After Chicago’s stunning comeback win on Wednesday night, the Blackhawks looked to capture some momentum into their final nine games of the regular season. Malcolm Subban was superb in the win Wednesday and was back in the net on Friday evening.

Coach Jeremy Colliton made one lineup change for the third straight game against the Predators, however. Nicolas Beaudin returned to the Blackhawks lineup for the first time since March 27 in the place of Calvin de Haan, who was taken out of the lineup because of his lingering hip issue. Colliton still opted to roll with seven defensemen, however.

Unfortunately for the Blackhawks, Juuse Saros was back in net for Nashville. In five games against the Hawks this season, Saros came in with a .945 save percentage and 1.75 goals against average, good for a 4-0-1 record. He has dominated the Blackhawks all year – until Wednesday night. Could Chicago ride that wave of success to another win?

Subban was tested early. Nashville came out the way they have played against the Hawks all year, putting pressure on the puck and not letting the Blackhawks make easy passes. Chicago tried to battle back and their effort earned them a power play; Colton Sissons went to the box for whacking Vinnie Hinostroza 6:33 into the period.

The alleged advantage that followed was a clinic by the Predators, who barely let the Blackhawks enter the zone during the two minutes. Chicago didn’t have a shot on net because they didn’t complete a pass despite having an additional skater on the ice.

Subban fought off multiple 2-on-1 situations in the first period and made some huge saves.

As the period progressed the Hawks started to get more shots on net but nothing was getting through. When the horn sounded after 20 minutes, the Blackhawks had an 11-7 shot advantage but the scoreboard had a zero for both sides.

Hinostroza only skated five shifts in the first period but he was noticeable on each one of them. He was credited with one shot on net and one blocked shot in the first. His 3:58 was the lowest ice time among Chicago’s forwards in the period.

Chicago started the second period much better than they had the first but couldn’t score (again). It took more than six minutes into the period for either side to put the puck in the net, and it came off Ryan Johansen’s stick unfortunately. Connor Murphy was late to the party in front of Subban and Kirby Dach couldn’t get between Johansen and the net and a loose puck was tapped in to give Nashville a 1-0 lead.

The Blackhawks kept putting shots on net but Saros didn’t care. Chicago was short-handed for a couple minutes in the middle of the period when Dach was sent off for a high stick but Nashville didn’t accomplish anything. Subban made a couple good saves to keep the Hawks within one.

Inside the final four minutes of the second period, Mikael Granlund won a board battle and set up Luke Kunin, who somehow found a gap big enough for the puck between Subban and the post to extend the lead to two. The play started with two Predators and two Blackhawks battling for the puck in the corner. Kunin and Nikita Zadorov left the scrum as the puck moved out and Kunin simply skated away from an oblivious Zadodov.

With 90 seconds left in the first period, Dach left the ice after Mattias Ekholm put him into the boards hard. He left the ice holding his left arm and appeared to be in some pain.

Here is Kirby Dach after the hit. #Blackhawks pic.twitter.com/7O4wzCvMjP

Sadly, even with a 13-12 shot advantage in the period, Chicago went to the room down two goals. The Blackhawks had some chances to get the puck on the net even more, especially early in the period, but didn’t pull the trigger. Saros was good, but he wasn’t tested with the high shots that Eddie Olczyk has begged the skaters to put on net for five games and finally saw work in the third period two days ago.

Desperate for offense, shift after shift we watched as Kane was sent over the boards with David Kampf. Because Colliton is smarter than everyone else in the room apparently.

Subban kept making big saves but there was simply no offense to speak of from the Blackhawks. Chicago was credited with one shot on net in the opening 11 minutes of the third period.

With 7:30 left in a period that saw the Blackhawks making more bad passes than even shot attempts, Hagel went to the box for holding. Time was running out on the Blackhawks playoff hopes and they weren’t putting up much of a fight.

The Blackhawks killed the penalty. Nashville happily let two minutes roll off the clock without a stop.

With 3:55 left on the clock, Erik Haula ripped a shot from the corner on the goal line and it went in. The lead was three. The game was, in reality, over.

Colliton pulled Subban almost immediately after the faceoff for an extra attacker, hoping to spark a comeback. He could have, you know, skated Kane with DeBrincat and Dach a few times. But now that the lead was three and the clock was disappearing he started to show some desperation.

The skaters showed almost no sense of urgency on the ice. There were about a dozen times in the game that a forward could have shot the puck but opted to look around and hope someone else was open. A team that doesn’t have a third legitimate sniper in uniform was suddenly trying to be perfect.

With Subban on the bench, Hinostroza parked himself in front of the net and Beaudin put a high shot on net. Hinostroza got a piece of it and it redirected around Saros and fully crossed the goal line. The officials needed a review to confirm the goal was good, and the Hawks were within two.

The one goal was nice but it was the extent of the offense.

The Blackhawks spent the final 90 seconds casually skating after pucks and throwing more grenades at skates instead of passes on tape. They lost to the Predators again, and their playoff chances are no longer something they can control. Indeed, they may not even be on life support.