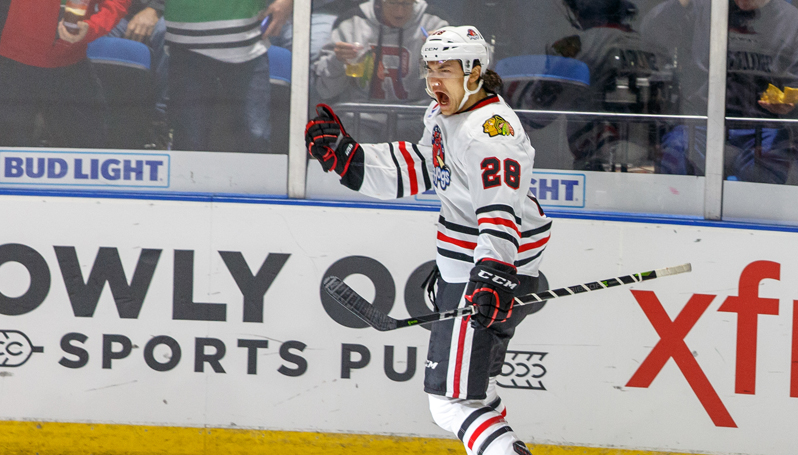 The 2018 NHL Draft is June 22–23 in Dallas, meaning we are less than two weeks away from the Chicago Blackhawks (potentially) making a top ten selection for the first time since Patrick Kane.

Stan Bowman has been active already, getting a number of top prospects signed and adding a couple international free agents as well. One name that won’t be back is Chris DiDomenico, who reportedly signed a deal in Europe after a nice run in Rockford this season.

One interesting note regarding a name missing from the list below, goaltender Ivan Nalimov. He has reportedly terminated his contract with his KHL club and Scott Powers at The Athletic is reporting that he has asked the Blackhawks to trade his rights.

With trade rumors swirling and the draft coming soon, it’s a good time to take inventory of the prospect group the Blackhawks have in-house already. Who will make an impact on the 2018-19 Blackhawks (and IceHogs)?

Here are our top 35 prospects.

Sikura finished a stellar college career and immediately joined the Blackhawks for five NHL games at the end of the regular season, during which he was credited with three assists. The organization is extremely high on him, and he showed flashes last year. He averaged 13:24 on ice per game in his limited NHL action. He could be a candidate for top-six minutes next year, but he could also follow the path of Nick Schmaltz and John Hayden and get some Rockford games in as well. Jokiharju signed his ELC earlier this week and will reportedly get a long look during training camp. He posted 71 points in 63 games with Portland in the WHL last season and added two goals and two assists in five games for Finland at the World Juniors. Mitchell was one of the top freshman defenseman in the country last year, putting up 30 points in 41 games for the defending national champions at the University of Denver. Mitchell was used on both special teams and was a top pair defenseman for the Pioneers, often skating with another Hawks prospect, Blake Hillman.  He’ll return to DU for a sophomore year. Ejdsell was part of the trade that sent Ryan Hartman to Nashville at the deadline and joined the Blackhawks when his SHL season ended. He produced one assist in six NHL games and also had one assist in five regular season AHL games with Rockford. He stayed with the IceHogs for the AHL playoffs and emerged as a solid power forward, recording 12 points in 13 postseason games. He has a great chance of being a regular on the Blackhawks next season. Kahun caught the eye of the NHL with a strong performance at the Winter Olympics and signed with the Blackhawks in May. He’s a good skater who showed a reliable two-way game at the Olympics and World Championships for Germany. He’ll get a long look in camp as well. Kayumov has a ton of skill, which is why the Blackhawks used a second round pick on him a couple summers ago. Injuries slowed down his KHL regular season, but he looked great at the World Junior Championships; he was one of Russia’s top forwards at the tournament. He will be a contract candidate following the upcoming season. A second player from last year’s draft class in the top seven looks good for Bowman, and Altybarmakyan has the makings of an intriguing prospect. He appeared in 15 games for SKA, one of the top teams in the KHL, as a teenager last year. He has a great shot and he’s happy to use it – frequently. Like Kayumov, he impressed at the World Junior Championships with Russia. Acquired in 2015 from the Canucks for Adam Clendening, it feels like Forsling has been around forever… but he just turned 22 this week. He still has a good ceiling and potential to be an NHL contributor, though he went back to Rockford after producing 13 points in 41 NHL games last season. He’s in the mix for the Hawks’ roster this fall. Hayden appeared in 47 games with the Blackhawks last season and was arguably the most physical forward when he was on the ice. He averaged 10:49 in his NHL games and produced 13 points with 54 penalty minutes. Hayden added three goals in 13 playoff appearances with Rockford. Hayden is expected to be in the mix for a role with the Blackhawks next season. Carlsson has flown up the rankings of Blackhawks blue line prospects over the last year and had a terrific season in the SHL. According to Scott Powers at The Athletic, Carlsson and presumed #1 pick in this month’s NHL Draft, Rasmus Dahlin, were the only defensemen under the age of 21 to average 18-plus minutes in the SHL this past season. He signed his ELC with the Hawks earlier this summer. Kampf signed as a free agent in May of 2017 and made his way to Chicago during his first professional season in North America. With the Blackhawks, Kampf averaged 12:48 per game and produced 11 points in 46 games. He did a good job at the dot and would be a good bet to be the fourth line center in Chicago when the 2018-19 season begins. Delia’s run in the AHL this season has certainly given him the top spot among goaltending prospects in the organization. Whether or not he’s on the NHL depth chart on opening night will depend on how comfortable Bowman is with Crawford’s health and what he can/can’t get done via trade or in free agency. Söderlund had five points in seven games for Sweden at the World Junior Championships and was among the better under-20 forwards in the SHL last season. He profiles as a potential bottom-six forward with an offensive upside. Krys had a solid sophomore season at Boston University, posting seven goals and 20 assists in 36 games. He’s a terrific skater with a lot of offensive ability, but has work to do in his own end. Lots of scouts were higher on Krys a couple summers ago than they are now, but he’ll return to BU for a junior year to put in some more work. Dahlström made some nice strides in his second full season in North America and earned a promotion to the NHL late last season. He had three assists in 11 NHL games before heading back to Rockford for the playoffs; Dahlström produced nine points in 13 postseason games for the IceHogs. He has a big body and showed he can be an effective shot blocker in limited action with the Hawks last year. Hillman has been a terrific surprise, developing into a solid pro prospect over his three seasons at the University of Denver. He left school a year early and signed with the Hawks in the spring and appeared in four NHL contests, during which time he scored his first NHL goal. Gilbert draws comparisons to former Blackhawks prospect Stephen Johns because a) he, too, went to Notre Dame, and b) they both like to hit. Gilbert decided to leave the Irish after three seasons and will be worth watching because he brings an amount of nasty the Hawks lack on the blue line. He was one of the nation’s leading shot blockers at Notre Dame. Highmore had a terrific career with Saint John in the QMJHL, putting up 89 points in 64 games during the 2016-17 season before signing with the Hawks last March. He was able to continue producing in the AHL, scoring 24 goals in 64 games for Rockford last season and earning a brief call-up to Chicago. Highmore scored twice in 11 games with the Blackhawks last season and could be in the mix for a bottom-six spot in camp. Nilsson signed at the end of May and adds another European veteran to the mix up front. He had 18 points in 40 games last season for Mora IK in the SHL. He only signed a one-year deal. Tuulola had a fine season with a new club in Finland (30 points in 58 games) and signed with the Hawks earlier this summer. He has nice size and, after joining Rockford, settled in on the IceHogs’ third defensive pair with Clendening in the playoffs.

28 thoughts on “Ranking The Blackhawks Prospects”