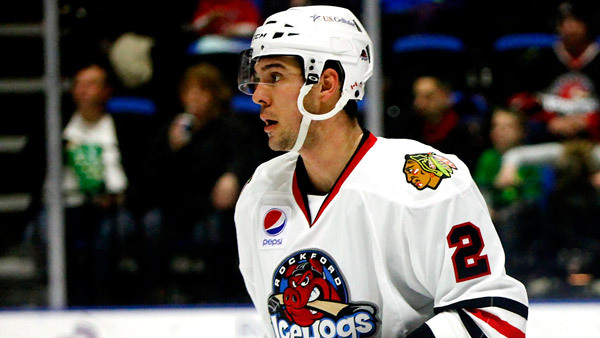 With the prospect camp behind us, it’s a good time to evaluate Chicago’s organizational depth. There is a lot to like about the Blackhawks collection of prospects right now, and there are a few question marks as well.

Today, let’s look at the team’s prospects on the blue line. Here are our rankings of the top defensemen in the organization.

(Note: we are not considering David Rundblad for this list.)

After not appearing in Central Scouting’s mid-term rankings, Söderberg was ranked 29th among European skaters in the final rankings prior to the 2014 NHL Draft. Söderberg hasn’t put up big offensive numbers, but proved capable of competing against older players in 36 regular season games and two playoff appearences for Skelleftea’s U20 team as a 17-year-old in his first SuperElit league season. He’s a capable puck mover who is defensively responsible player who was one of the younger players selected in the 2014 NHL Draft. In spite of his age, he’s already listed at 6-4 and 200 pounds and will only continue to fill in his big frame.

Selected seven picks before Söderberg, Snuggerud hails from the same high school that produced Nick Leddy. Snuggerud was named the 2014 Reed Larson Award winner as the top senior boys’ high school hockey defenseman in the state of Minnesota. Like Leddy, he’s a very good skater who jumps into the rush well. His uncle, Dave Snuggerud, played 215 games with the Sabres from 1989-1992. Luc will play at the University of Nebraska-Omaha next season. Fournier was the Hawks’ second round pick in 2012, and has shown a lot of offensive ability in limited action in the two seasons since. Unfortunately, injuries have kept him off the ice including season-ending shoulder surgery last year. He’ll have a chance to potentially skate with Brisebois, who was his partner at Rouyn-Noranda in 2012-13; Brisebois posted 73 points in 64 games that season. Fournier is a very good skater and excellent puck mover who has played in very situation in juniors. He signed his pro contract at the end of last season and will report to Rockford this season.

Norell was a member of the silver medal-winning group representing Sweden at last year’s World Junior Championships, producing one goal in seven contests during the tournament. He’s physically matured since being drafted, gaining an inch in height and 15 pounds since last summer’s draft. Norell is a good skater, handles the puck well and is a willing shot blocker. He had a very good week at the Hawks’ prospect camp.

Paliotta has done a really nice job of developing over his first three seasons at Vermont; college hockey has treated him well. Last season he produced five goals and added 22 assists in 38 games. More of a stay-at-home defenseman, he does have a good shot (scored during the second scrimmage of the prospect camp). He’ll head back to Vermont for his senior year this fall, but could be in Rockford by the end of the 2014-15 campaign. Dahlström hasn’t become much of an offensive player yet, but he uses his big frame well and is a good, physical defenseman. Last year after he was selected by Chicago, the Hawks’ head European amateur scout referred to Dahlström as a “prototypical “modern” defenseman.” Still only 19, there’s a lot to like about his potential and size. He’ll spend another year in Sweden with Linkoping, the same organization that produced Klas Dahlbeck.

One year ago, van Riemsdyk was the hottest name in potential college free agency behind Danny Dekeyser; Dekeyser signed with Detroit, van Riemsdyk opted to return to New Hampshire for his junior year. He posted 23 points in the first 26 games of the year before a broken ankle cut his season short. The younger brother of Toronto’s James van Riemsdyk – who the Hawks passed on when they drafted Patrick Kane – he’s a good skater and excellent puck mover who could be considered for an NHL roster spot soon. He turns 23 tomorrow, and will head to Rockford this year. There’s a really good chance that Dahlbeck is the first player on this list to stick in the NHL, and it could be as early as this October; he was the first Rockford defenseman recalled at the end of the 2013-14 season (when Brent Seabrook was suspended). Dahlbeck had a strong second professional season in Rockford last year, finishing with 10 goals and 25 assists in 75 games with the IceHogs. He’s more of a stay-at-home defenseman, a solid penalty killer whose work ethic has been praised by coaches and management in Rockford.

It’s scary to think the Blackhawks drafted four players – including another defenseman (Justin Holl) – in front of Johns in 2010, but they appear to have a stud in the Notre Dame grad. He’s a big, physical defenseman with a good shot from the point who jumped into the mix in Rockford after completing his senior year with the Fighting Irish and produced five points in eight games with the IceHogs. He won’t be in Rockford for very long, and could develop into a top-four defenseman at the NHL level.

Clendening led the IceHogs with 59 points last season, his second in Rockford, and was named to the 2013-14 AHL First All-Star Team. He’s a good offensive defenseman who handles the puck well and is a good skater. Between Clendening, Johns and Dahlbeck, the Hawks have three prospects ready if/when a player is traded or gets hurt during the coming season. of the three, Clendening is the best puck mover; the other two are stronger defensively and Johns is the most physical. If/When Clendening, Dahlbeck and Paliotta reach the NHL, the Blackhawks’ 2011 Draft class will continue to establish itself as one of the better groups in recent franchise history. Brandon Saad and Andrew Shaw have played in 126 and 165 regular season games, respectively, and both have a Stanley Cup championship already on their resume. And all of these guys were drafted after the first round, where the Hawks selected Mark McNeill and Phillip Danault.