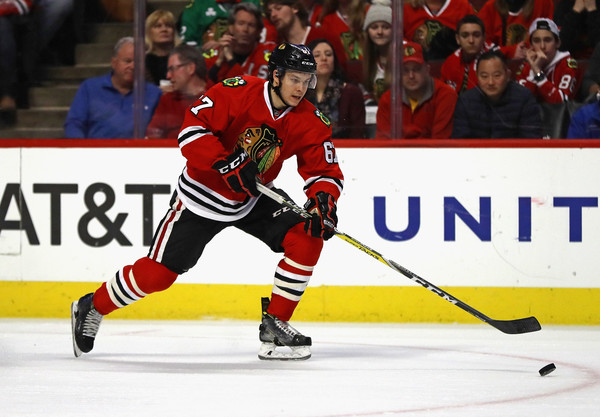 After highlighting the rookie performances of the Blackhawks earlier on Thursday, the kids obliged us with a terrific performance against the Jets. But another bad third period sunk the Hawks at home – again.

The first period opened the door for more of the usual complaints. On Wednesday, the Daily Herald wrote about the troubling trend of the Blackhawks allowing multiple goals in short amounts of time, and the Jets provided another example of that in the first period.

Six minutes into the game, with Richard Panik in the box, Bryan Little made a terrific play to set up Patrik Laine for an easy power play goal. Only 42 seconds later, Shawn Matthias tipped a Jacob Trouba shot past Scott Darling to make the score 2-0 in favor of the Jets.

At which point, based on social media comments, most Blackhawks fans changed the channel. After all, the Jets had the Hawks number so far this year and the pessimism after a bad third period on Tuesday night carried over to the opening seven minutes on Thursday.

The Hawks didn’t shut it down as quickly as many fans, thankfully.

Nic Petan went to the box 13 minutes into the first, giving the Blackhawks their first power play of the night. Artem Anisimov won the faceoff and Duncan Keith unloaded, scoring his fourth of the year.

Aided by a second power play, the Hawks out-shot the Jets 18-8 in the first period. But they trailed 2-1 on the scoreboard.

Chicago kept the pressure on to start the second period and got another advantage. The Jets killed the Toby Enstrom penalty but a strong shift from a new-look line for coach Joel Quenneville – Nick Schmaltz, Marcus Kruger and Marian Hossa – tied the game. Kruger got tied up along the boards and the puck found Schmaltz, who attacked the net and fired a shot home for his third of the season.

The teams traded penalties a couple times in the middle stages of the second, but at even strength late in the period Tanner Kero and Patrick Kane perfectly executed a give-and-go that resulted in Kero’s fourth of the year a Blackhawks lead.

Darling played well in the second, stopping 12 shots to hold the Jets at two while his teammates scored twice in 14 shots on Connor Hellebuyck. Through 40 minutes, Chicago had 32 shots on net and three goals on the board.

The game got physical in the third period. Panik had a couple big hits, and Schmaltz did a great job of tipping a puck out of the defensive zone before colliding with Enstrom.

With four minutes left in regulation, Andrew Copp tipped a hard shot through Darling to tie the game. And the Hawks’ Achilles’ heel showed up again; 32 seconds later Bryan Little rifled a shot past Darling to give Winnipeg a 4-3 lead. Now, the Blackhawks had 3:31 to come up with an answer.

Darling went to the bench with 2:34 left and Anisimov taking an offensive zone draw. Chicago couldn’t get a quality scoring chance and Mark Scheifele tapped in an empty net goal to extend the lead to 5-3 at 2:01 left in regulation. Copp picked up an assist on the Scheifele goal to give him a two-point night; Scheifele had an assist on Copp’s goal to also have a multi-point evening.

Panik lit up Enstrom with 1:31 left in regulation and was sent to the box to put the Blackhawks short-handed for the rest of regulation.

Chicago is now 0-4-0 against Winnipeg on the season.

More importantly, the Blackhawks lost a home game in which they started the third period with a lead for the second consecutive game. Chicago goes into the All-Star Break having allowed seven goals in the third periods of their last two games.

Anisimov won 12 of 21 at the dot and Jonathan Toews won 11 of 16 faceoffs for Chicago. Kruger won two of five with one blocked shot and two takeaways in his return from injury.

Kane and Hossa led the Blackhawks with five shots on net each. Keith put four shots on net and had a team-high three blocked shots in 26:35 on the ice. Panik led Chicago with five hits.

Michal Kempny skated only 8:54 and put two shots on net. Vinnie Hinostroza (5:44) and Andrew Desjardins (7:01) were the low ice time recipients up front, skating on a fourth line that started with Kero in the middle. Kero skated 12:03 with two blocked shots, one takeaway and a goal.

The Hawks put 41 shots on net but their three goals weren’t enough. Darling allowed four goals against 32 shots in the loss.