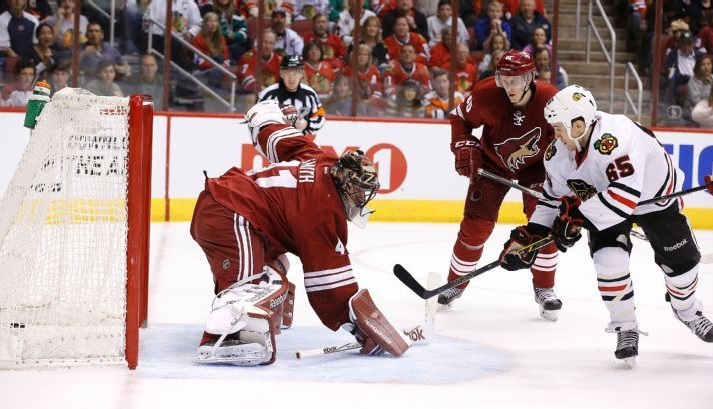 The Blackhawks dominated almost every aspect of the game on Thursday night, but it took almost 53 minutes to get a second goal past Mike Smith. Thankfully, a strong defensive effort and good night between the pipes meant two were enough to earn two critical points.

The Hawks out-shot the host Coyotes 17-6 in the first and second periods, but the score was tied at one goal for each side through 40 minutes. Tobias Rieder got Arizona on the board at 4:53 and Andrew Shaw scored a power play goal at 8:10 in the first to bring the score even.

It wasn’t until Brad Richards scored a second power play goal – in nearly identical fashion to Shaw’s goal in the first – that the Hawks were finally able to take a lead in the game. Thursday night marked the first time since Feb. 11 that the Hawks scored more than once on the power play in a game.

The game-winner was Richards’ first goal in 23 games.

Considering the help he received, Smith had a pretty good night in net for the Coyotes. He made 43 saves and Arizona successfully killed five Chicago power plays, but the second goal allowed cost him. On the other end of the rink, Corey Crawford was very good when he needed to be. He only made 17 saves in the game, but made a number of big saves on redirected shots to keep the game tied – and, eventually, a Hawks win.

Chicago dominated more than just shots on goal. The Blackhawks won 37 of 56 faceoffs, led by former Coyote Antoine Vermette winning 11 of 14 in the game. Jonathan Toews won 16 of 28 and was credited with a team-high three takeaways in the game.

Rookie forward Teuvo Teravainen had another good night skating at wing on the Hawks’ second line. He picked up the secondary assist on Richards’ game-winning power play goal and was credited with two hits, one takeaway and three shots on goal in 16:37.

Bryan Bickell and rookie Joakim Nordstrom finished tied for the team lead with four hits each, but the final hit of the night from Nordstrom may cost him. He put Oliver Ekman-Larsson into the boards and was sent to the box for boarding; Ekman-Larsson was injured on the play, and left the ice with assistance from a trainer.

Bickell skated a team-low 9:06 (11 shifts) in the victory. Defenseman Kimmo Timonen was the only other Hawks player under 10 minutes (9:21).

15 thoughts on “Razing Arizona: Blackhawks Hang On In Desert”