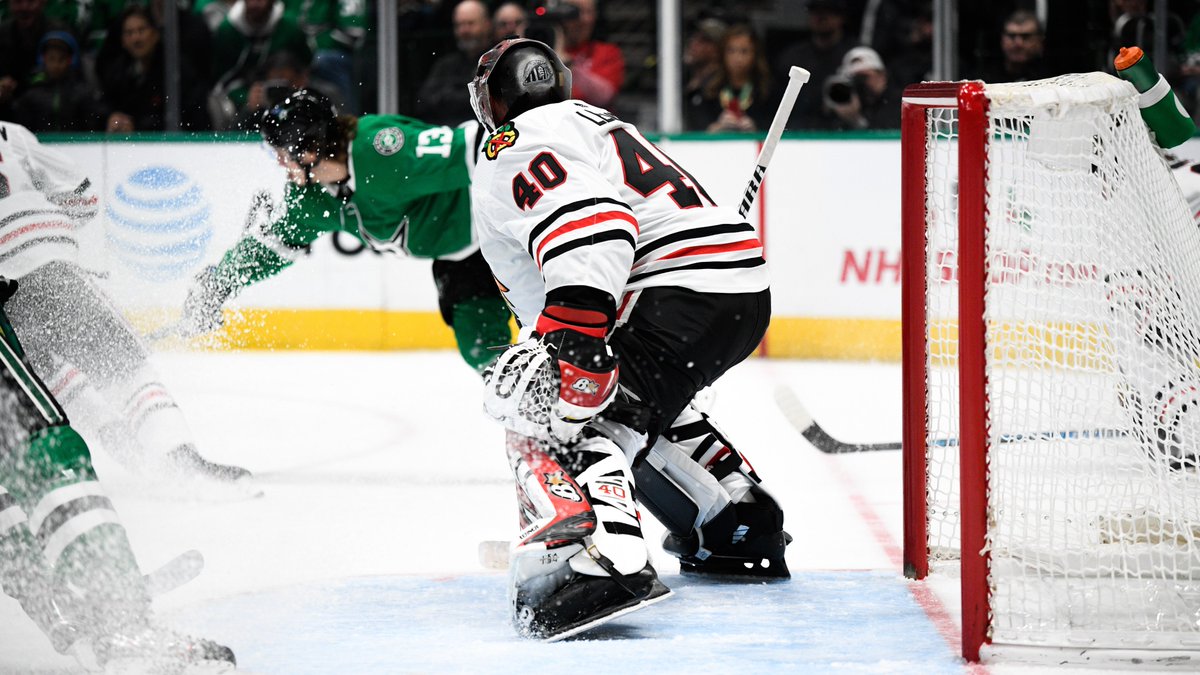 The Blackhawks ventured to Dallas on Saturday evening to play one of the hottest teams in the NHL. The Stars had won five in a row and 12 of their previous 14.

Chicago, on the other hand, had lost two straight in regulation coming into the game. Slater Koekkoek didn’t need a revenge game so coach Jeremy Colliton put Dominik Kubalik back into the lineup, this making the seven defensemen experiment a one-game failure this week.

Robin Lehner was terrific in the first period but 14 minutes in Roope Hintz parked himself in front of the net and got just enough of a piece of a John Klingberg shot to get the puck into Chicago’s net.

Three minutes later Patrick Kane ignited a rush that saw Alex DeBrincat set up Olli Maatta for the defenseman’s first goal as a member of the Blackhawks.

The second assist on the goal extended Kane’s point streak to 12 games.

After 20 minutes of hockey the Stars held a 16-12 shot advantage.

The Hawks got their act together in the second period. After Lehner was under pressure the entire first period Chicago allowed zero high-danger chances at 5-on-5 in the second. Chicago out-shot Dallas 13-8 in the second but neither team was able to score.

We headed to the third tied at one.

Anton Khudobin made a series of saves that may have saved the game for Dallas 2:30 into the third period. Kubalik had a great look at a mostly open cage but Khudobin got a toe on it. Andrew Shaw then got a couple whacks at a loose puck on the goal line but a review wasn’t able to clearly see the puck across the line, so there was no change in score.

David Kampf went to the box for interference after crashing into the net chasing a breakaway chance with 7:52 left in regulation. Lehner continued to play marvelously and Chicago was able to kill another penalty.

Both teams were getting great looks at the net as the third period continued and both goaltenders were playing exceptional hockey.

With three minutes left in regulation a long shot from the point got through Khudobin but was ruled to have been redirected by a high stick by Dylan Strome. The play was reviewed and it was indeed a high stick. The game continued, tied at one.

Regulation expired with the game knotted. Both sides put 12 shots on net in the third period, making the shot totals 37-36 favoring the Blackhawks after 60 minutes.

For the sixth time in 12 starts by Lehner a game went into overtime.

Kane picked a pocket with 2:40 left in overtime and flew up the ice for a breakaway. He was denied, however, and the Blackhawks were immediately shorthanded because of too many men being on the ice after the failed shot attempt by Kane. It was the second too many men penalty on Chicago in the game and came with 2:27 left in the extra session.

The Hawks killed the penalty and as time wound down Shaw took the puck all the say to the net. He was clearly taken down by Tyler Seguin with four seconds left in regulation but the officials opted to swallow their whistles and let the game be decided in a skills competition.

In 65 minutes of exciting hockey, Khudobin made 39 saves against 40 shots. Lehner made 41 stops against 42.

Joe Pavelski beat Lehner to open the shootout. Toews was up first as always for Chicago and Khudobin got a piece of the puck, keeping Toews from getting a clean shot on net.

Toews finished the night with five shots on net and won 15 of 24 faceoffs. He was also credited with two blocked shots and one hit.

Maatta scored Chicago’s only goal and led the Blackhawks with six blocked shots.

Alex Nylander skated 12:04 and failed to put a shot on net. Strome skated 17:32 and won half of his 14 faceoffs but also was held without a shot on net. Kubalik was limited to just 8:32 but managed two shots on net.

Keith appeared in his 1,100th career regular season game with the Blackhawks on Saturday night.

That's a lot of games, Duncs!@DuncanKeith is playing his 1,100th @NHL game tonight! He currently ranks third in games played for the #Blackhawks behind Stan Mikita (1,394) and his teammate Brent Seabrook (1,102). #ChicagoRunsOnDuncan pic.twitter.com/zDGYskLODn