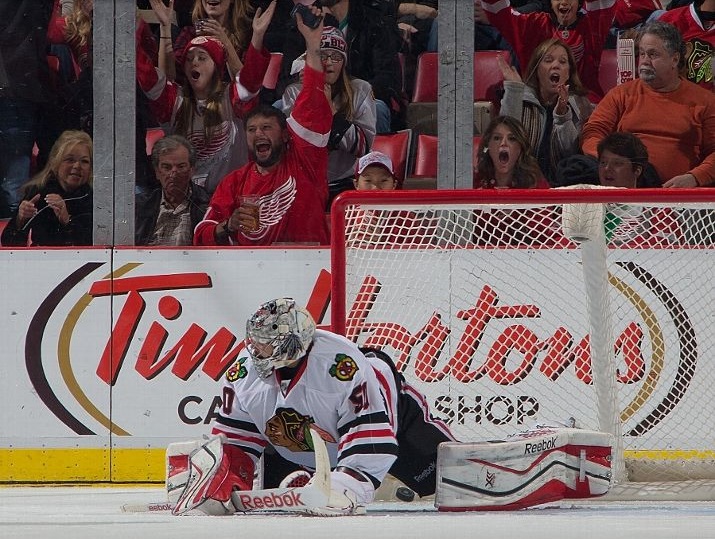 The Blackhawks entered Friday night’s game in Detroit having enjoyed a lot of recent regular season success against their rivals. But with Pavel Datsyuk back in the lineup, the Red Wings dominated a hapless Hawks team. Giveaways by Kris Versteeg, Patrick Kane and David Rundblad all ended up in the back of the net. Versteeg’s led to him spending the final 13 minutes of the first period on the bench. The goals following the Kane and Rundblad turnovers came 70 seconds apart in the second period as the Wings put the game away.

Brendan Smith added an empty net tally in the third to close the books on the night.

Corey Crawford was one of the few bright spots for Chicago on the night. This game could have easily seen the Wings score five or six, but Crawford continued his strong play. Chicago’s netminder stopped 33 of 36 but took the loss. He did serve up a big rebound to Tomas Tatar that led to Detroit’s third goal, but was good the rest of the night.

Trevor vanRiemsdyk spent most of the night with Duncan Keith and looked good once again. The rookie skated 21:04 and was credited with three shots on net and one blocked shot in the game. Keith led the Hawks with 27:35 in the game, and Johnny Oduya (20:28) was the only other Hawks defenseman over 20 minutes in the game.

Up front, coach Joel Quenneville threw his lines in a blender throughout the third period to absolutely no success. Marian Hossa was limited to 16:11, skating only three shifts in the third period.

Kane scored the Hawks’ only goal, a power play marker in the first period. Chicago’s penalty kill was perfect against three Detroit power plays, and the Hawks were 1-4 on their own power play.

The Hawks return home to host a struggling Dallas Stars team on Sunday night. Chicago still hasn’t won three games in a row this season, but will look to get back on track at the United Center.