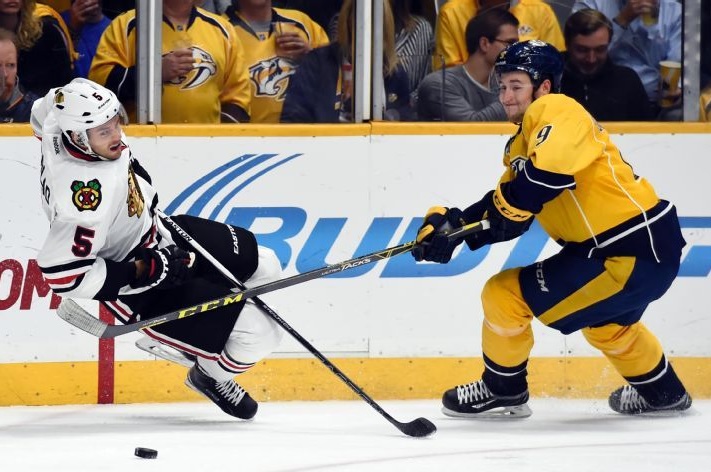 UPDATE: On Sunday, the Blackhawks loaned David Rundblad to ZSC Lions of Switzerland’s National League A. With Rundblad on loan, his cap hit for the Blackhawks will be reduced to $100,000.

There was some intrigue surrounding Rundblad when he cleared waivers. Rockford recalled defenseman Nick Mattson from Indianapolis hours before the Blackhawks announced assigning Rundblad to the IceHogs.

With the addition of Rundblad, Rockford has nine defensemen on their roster including NHL veteran Kyle Cumiskey and Viktor Svedberg, who spent some time with the Hawks earlier this season. Cumiskey will reportedly be out for 4-6 more weeks with a lower body injury; he has not played since Nov. 18, and has appeared in only five games with the IceHogs this season.

Scott Powers first reported on Dec. 30 that Rundblad may be headed to Europe and Chris Kuc echoed those comments.

A report from SwissHockeyNews.ch that Rundblad may be headed to the ZSC Lions of the Swiss NLA. Zurich is in first place in the NLA and is coached by Marc Crawford. If Rundblad wanted to play in front of NHL scouts, Zurich would be a smart landing spot as the likely top overall pick in the 2016 NHL Draft, Auston Matthews, is playing there under Crawford’s watch.

Rundblad, 25, signed a two-year deal with the Hawks after “helping” them win the Stanley Cup. He has been thoroughly outplayed by youngsters Trevor van Riemsdyk and Erik Gustafsson (and Svedberg, though he was demoted). He hasn’t been able to crack the lineup in Chicago.