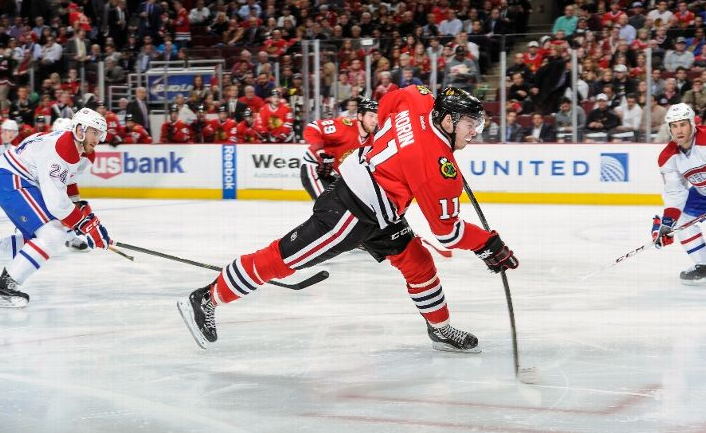 After the Blackhawks win in Nashville, the Chicago Sun-Times published a report that forward Jeremy Morin wants the team to either play him or trade him.

With Patrick Sharp coming back soon, how much longer will Morin be in the press box as a member of the Blackhawks? Morin, 23, has zero points in 15 games this season. His point total isn’t the only part of his game at the bottom of the stat sheet for the Blackhawks this season. Morin also has the lowest ice time average per game – 7:44 – of anyone to dress for the Hawks this season.

On June 24, 2010, Morin was the key prospect that came back to Chicago in the biggest salary dump trade in the wake of the franchise’s Cup victory. Morin came to the Hawks with Marty Reasoner, Joey Crabb and a couple draft picks in the deal that sent Dustin Byfuglien, Ben Eager, Brent Sopel and Akim Aliu to the then-Atlanta Thrashers.

Since then, Morin has played in 54 games at the NHL level, scoring eight goals while adding eight assists.

He’s dealt with some injuries in the AHL over the last few years, but was a solid producer for the IceHogs. Last season, Morin had 24 goals and 23 assists in 47 games in Rockford and saw modest success with the Hawks, posting 11 points in 24 games.

Over the summer, the Hawks decided to keep Morin around and gave him a two-year deal with an $800k cap hit. But he hasn’t been able to get on the ice consistently in the new season, and every day it appears that another prospect has jumped him in the eyes of the front office.

That he wants to go isn’t surprising; he would follow former Rockford teammates Brandon Pirri, Jimmy Hayes and Dylan Olsen out the door.

So where could the Hawks trade him?