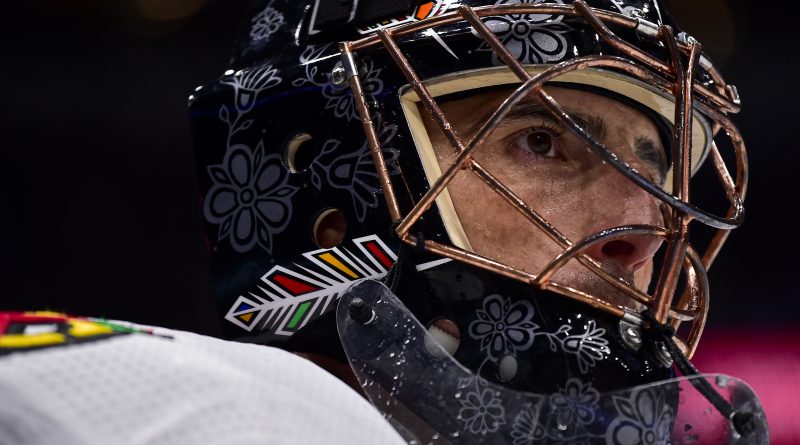 UPDATE(s): Steve Simmons apparently has no clue what he’s talking about. But his sources are both very good, and not in agreement.

After Simmons initially, confidently reported on Saturday evening, Marc-André Fleury wasn’t going anywhere. then he updated that with another “strong, reliable” source indicating Fleury was going to be traded.

MORE INFO THIS AM on MARC-ANDRE FLEURY
There are at least three teams talking to the Blackhawks about Fleury. Those teams believe Fleury is in play. Most would need the Hawks to take back some salary or take a bad contract in exchange.
This story seems to change by the moment.

According to Steve Simmons of the Toronto Sun on Saturday night, goaltender Fleury has told the Blackhawks he wants to stay with the team through the end of the season.

Which means the biggest chip Kyle Davidson had heading into the trade deadline is, apparently, off the table.

Fleury has the ability to provide the Hawks with a ten-team no-trade list per his contract, but the organization agreed to honor his request if/when the time arrived to make a decision about the rest of his season.

A reminder for Blackhawks fans who are now going to take the easy route and blast Davidson: this wasn’t his call. It’s completely on Fleury to make this decision. He took his time deciding if he would even accept the trade from Vegas to Chicago in the first place over the summer. If he wants to play the remainder of this season — and this contract — in Chicago, Davidson will have plenty of conversations about the other players on his roster who could/should be available at the deadline.

24 thoughts on “Report(s): Marc-André Fleury Staying In Chicago… Or Going?”