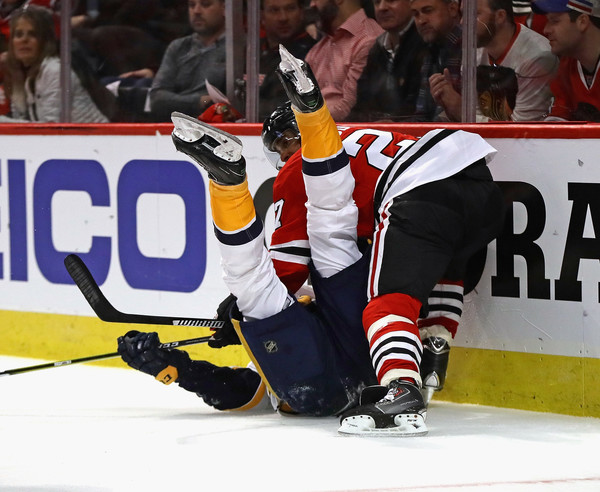 The Blackhawks opened their quest for a fourth Stanley Cup in the current era on Thursday night at the United Center, and the opening 40 minutes were what fans should have expected from a game between division rivals.

Chicago looked good coming out of the gate and spent the first few minutes controlling the puck. But the final 16 minutes of the first belonged to Nashville, who took a 1-0 lead to the room. Viktor Arvidsson, who led the Preds with three goals against the Hawks during the regular season got Nashville on the board at 7:52 into the first.

Nick Schmaltz ran into Richard Panik and Jonathan Toews on the play, opening a shot opportunity for Filip Forsberg. Arvidsson flashed in front of the net and tipped home his first of the postseason.

The shots were 11-6 Nashville after one, and the Hawks had only one shot in the final 16 minutes.

Chicago showed a strong course correction in the second period.

Ryan Johansen went to the box nine seconds into the second period and the Blackhawks started attacking. Chicago didn’t convert on the power play but they showed more purpose on the puck – thanks to coach Joel Quenneville turning on his line blender.

Tanner Kero found himself on the wing with Toews and Panik and that combination had a number of good chances in the second. Toews and Patrick Kane saw a lot of the ice in the middle period as the Hawks tried to beat Pekka Rinne, but Nashville’s netminder was on point.

Chicago out-shot Nashville 12-4 in the second, and the Preds had 20 credited blocked shots through 40 minutes of play. Nashville held their 1-0 lead entering the third. Panik and Kero combined for nine hits and five shots on net in the first two periods.

The Hawks got a power play when Arvidsson tripped Anisimov at 11:52 and almost got a two-man advantage when Roman Josi flipped the puck into the stands. The officials ruled that the puck was tipped and the Hawks maintained a single-man advantage for the remainder of the power play but couldn’t get anything going.

With roughly 3 minutes left in regulation, the Hawks got what effectively served as a timeout when Pontus Aberg crashed into the Hawks net. Chicago got a shot on net after the offensive zone draw but Nashville quickly took the play the other direction after another Rinne save.

Crawford went to the bench with two minutes left in regulation, and the first group on the ice was the Kane line with Marian Hossa joining as the extra attacker. They got one scoring chance that was swallowed by Rinne.

Coach Joel Quenneville burned his timeout with 61 seconds left and sent Toews over the boards with Kane, Panarin, Anisimov, Brent Seabrook and Duncan Keith. Bad passing almost turned into a second goal for Nashville but PK Subban helped the Blackhawks by icing the puck with an ill-advised shot attempt from deep in his own zone with 19.9 on the clock.

Nashville used their timeout after the icing.

Nashville iced the puck again with 7.2 on the clock.

Nashville won the faceoff and iced the puck again, but the whistle didn’t sound until there were 0.2 on the clock. Rinne finished a magnificent shutout in Game One of the Stanley Cup Playoffs.

Of the Blackhawks rookies, Schmaltz struggled the most; it wouldn’t be surprising if Andrew Desjardins dressed in Game Two. He skated 10:44 and had, by far, the worst even strength Corsi for on the roster (30.77). John Hayden’s Corsi for wasn’t great either, but he was limited to just 5:39 in the game.

Kero performed very well, however. In 13:15 he won four of five faceoffs, was credited with six hits and three shots on net.

In his first action in a month, Anisimov won eight of 13 faceoffs with two hits and two shots on net in 19:06. Toews won 14 of 24 at the dot but wasn’t credited with a single shot on net.

Panik led the Hawks with seven hits. Kane had a team-leading six shots on net and skated the heaviest minutes – 24:23 – of any Chicago forward. Seabrook a team-high four shots.

Crawford made 19 saves in the loss. Rinne stopped 29 and the skaters in front of him blocked 26 in the game.

39 thoughts on “Rinne, Preds Shutout Blackhawks In Game One”