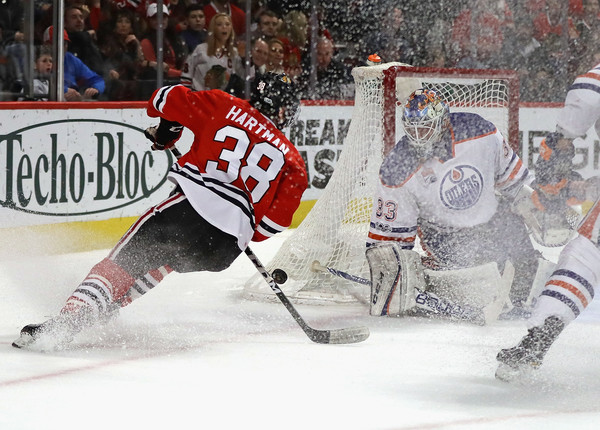 On Wednesday morning, the Blackhawks rolled out the following healthy lines at their morning skate:

As we have discussed throughout the season, rookies have made a significant impact on the Blackhawks run to the top of the Western Conference this season. As John Dietz wrote for The Daily Herald on Tuesday, playing alongside the Hawks’ elite core of veterans has certainly helped the youngsters integrate into the NHL. But their performances cannot be understated.

Let’s look at the four rookie forwards who look to be drawing into the Game One lineup against Nashville. Hartman’s 19 goals finished tied with Toronto’s Mitchell Marner for seventh among all rookies this season. His plus-13 rating finished fourth among rookies behind three skaters – one of which will come up in this discussion. Hartman’s 121 hits ranked fifth among rookie forwards, and his 30 blocked shots ranked 15th among rookie forwards. He has skated all over the Blackhawks’ lineup this year, spending time with Toews early in the season before settling in on an effective third line with Hossa. Those two have developed good chemistry and have provided Chicago with a strong offensive threat on the third line.

In four games against Nashville, Hartman had one goal and three assists and average 11:13 per game. Kero spent a little more than half of the regular season with Chicago but quickly earned the trust of coach Joel Quenneville. He blocked 51 shots in only 47 games, a total that ranked fourth among all rookie forwards in spite of his limited appearances. Kero also took 471 faceoffs this year, which ranked fifth among rookie forwards (he won 44.4 percent of his draws). When Anisimov went down late in the season, Kero earned a bump up to skating between Kane and Panarin. His plus-15 rating ranked second among all rookies and led rookie forwards.

Against Nashville, Kero had one assist in three games and averaged 13:41 per game. Since February 1, Schmaltz has emerged as a bona fide offensive threat for the Blackhawks – even while spending some time at center while the Hawks tried to fill in for Anisimov. Schmaltz ranks sixth among all rookies since Feb. 1 with 21 points, and his plus-13 rating over that time frame is the best among all rookies. Skating with Toews and Panik, Quenneville has found a combination that gives the Blackhawks a nice second scoring line behind Kane-Anisimov-Panarin. His 22 assists were tied for 11th by a rookie this season in spite of his time in Rockford.

Schmaltz scored one goal and averaged 11:57 in two games against Nashville this season. Hayden is the newcomer to the discussion, but he’s made a major impact over the last few weeks. He quickly piled up 44 hits in 12 games, which ranked ninth on the Blackhawks for the entire season; his 3.7 hits per game is more than double any other Chicago forward. Hayden saw some time with Toews after signing but has settled in nicely on the Hawks’ fourth line with Kero and Tootoo.

Hayden has not yet faced Nashville since jumping to the NHL level straight from Yale.