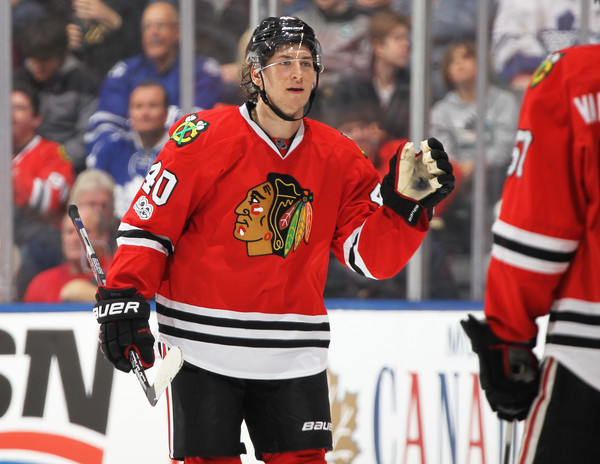 Heading into a prime time Saturday night match-up in Toronto, it was obvious that rookies would be at the heart of the conversation. The fact that Chicago would be skating without two key veterans – Artem Anisimov and Marian Hossa – made young players even more important for both teams.

After all, the Leafs have three first year skaters – Auston Matthews, Mitchell Marner and William Nylander – all over 50 points on the season. Toronto’s young core is starting to remind many of the Blackhawks’ nucleus back in 2007-08, and the Leafs have admitted to looking up to Chicago’s champions. On Friday, James Mirtle posted a terrific piece at The Athletic Toronto talking about how much Matthews looks up to Jonathan Toews.

And in the first period, Matthews got Toronto on the board. His 32nd goal of the season gave the Leafs a 1-0 lead in spite of the Blackhawks out-shooting the green jersey-wearing Leafs 13-8 in the opening 20 minutes.

Early in the second period, coach Joel Quenneville threw his already-scrambled lines into the blender. Nick Schmaltz took a few shifts between John Hayden and Richard Panik and Toews was with Patrick Kane and Artemi Panarin. Hayden came out with a physical approach again; he was credited with five hits in 9:44 on the ice over the first two periods.

The Hawks out-shot the Leafs by five shots again in the second (12-7), but finally beat Frederik Andersen to tie the game. At 10:51, Hayden scored his first career NHL goal.

Per @EliasSports: @NHLBlackhawks had multiple Illinois-born players score in a season for the first time since 1998-99 (Olczyk, Chelios). pic.twitter.com/aUsRMSCMek

Brent Seabrook and Toews picked up the assists on the Hayden marker, which makes the former Yale captain the seventh player to score his first career NHL goal with the Blackhawks this season. Seabrook made sure the puck wound up with the Blackhawks equipment staff so Hayden has a souvenir.

Chicago’s line of Tomas Jurco, Ryan Hartman and Marcus Kruger had a terrific shift five minutes into the third with a mad scramble in front of the net. Unfortunately, the Hawks weren’t able to convert on a few good chances. They generated some more good buzz later in the third before Quenneville sent out Hayden, Toews and Panik for an offensive zone draw with seven minutes left in regulation.

The Hawks out-shot the Leafs 36-25 in regulation but neither team scored a second time in regulation. So on to overtime we went.

Meanwhile, the Minnesota Wild lost their fourth in a row with a 3-2 loss to the Rangers in regulation.

In the closing seconds of overtime, Panarin set up Hartman – another rookie – for the game-winner and Chicago skated away with a 2-1 victory.

Crawford stopped 25 of 26 in the victory, bailing out his skaters on a number of occasions. He also, officially, picked up his first assist of the season on Hartman’s game-winning goal.

Hayden skated 15:29 and was credited with seven hits with his first career goal. Hartman led Chicago with six shots on net and was also credited with three hits in addition to his game-winning goal in 13:26 on the ice.

Toronto dominated the Hawks at the dot. Schmaltz won only one of 12 faceoffs and Toews won eight of 20. Tanner Kero won three of 11 and Marcus Kruger won half of his ten draws.