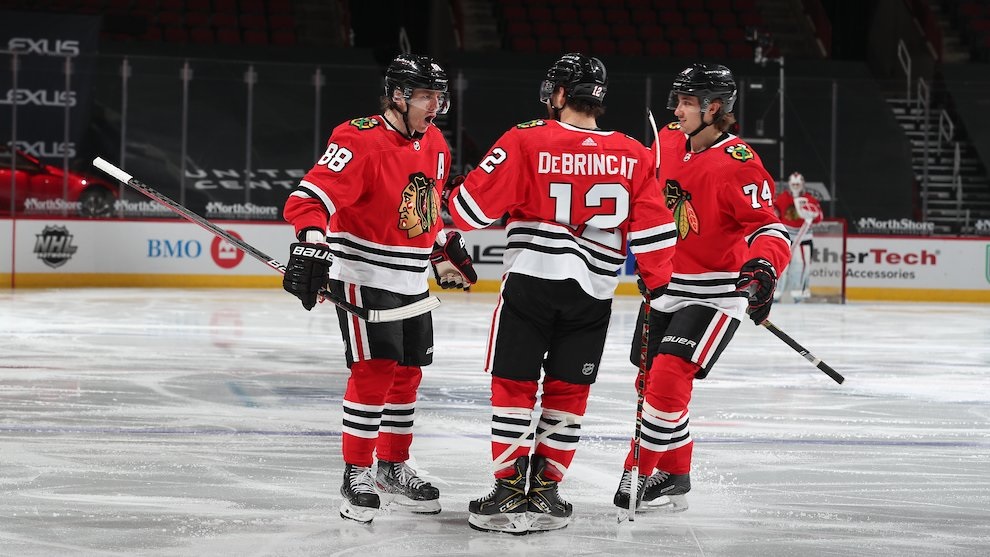 After holding opponents to just over two goals per game in their last 10 contests, the flood gates opened up on the Blackhawks defense on Thursday night.

A Kevin Stenlund goal with 74 seconds left in regulation ended up being the difference in the game. Columbus scored four goals in the third period and overcame two, two-goal leads to emerge with a 6-5 road victory.

The game marked only the second regulation loss in the Blackhawks’ last 12 games.

While the defensive effort was a disaster and Kevin Lankinen would undoubtedly love a do-over, not everything was ugly. The Blackhawks did score five goals, and they came from the youngsters once again.

Chicago trailed 1-0 after the first period but the offense didn’t take much time to get going in the second. Ian Mitchell tied the game with his first career NHL goal.

Nicolas Beaudin gave the Blackhawks the lead with his first goal of the season only 56 seconds later.

Beaudin’s night had only just begun. He started a pretty passing play that finished with Patrick Kane setting up Pius Suter for his sixth of the season to extend Chicago’s lead to 3-1.

The Hawks gave up a goal with two minutes left in the second to give Columbus a glimmer of hope. At the end of 40 minutes of hockey, the Blackhawks led 3-2 off three goals from rookies.

Patrick Kane extended the lead back to two just 29 seconds into the third period with a power play goal.

The goal is Kane’s seventh of the season.

But the defense started to fall apart a few minutes later. Columbus scored twice in 80 seconds in the middle of the period to tie the game. Lankinen was fighting it and, even with seven dressed defensemen, the Hawks weren’t clearing the puck. And Chicago was taking worthless penalties, opening the door for the Jackets to climb back in to the game.

Kane set up DeBrincat for a go-ahead goal at 13:05. Madison Bowey picked up his first assist with the Blackhawks on the Hawks’ fifth goal of the night.

That goal would end the night offensively for Chicago and Columbus would score the final two to escape with a regulation victory.

Kane led the Hawks with one goal and two assists in 21:26. DeBrincat matched his one goal, two assist performance in 20:12. And Suter finished tied for the team lead with Kane with four shots on net in 18:45. After the game, Kane was very complimentary of Suter’s emergence as a more confident NHL player as the season has progressed.

Lankinen wasn’t great but he faced 43 shots in the game – far too many.