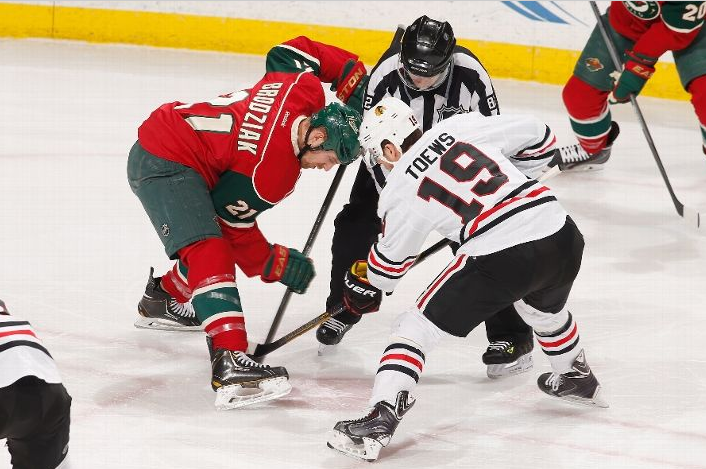 With their dramatic overtime win in Game Seven, the Minnesota Wild will face the Chicago Blackhawks in the Stanley Cup playoffs for the second consecutive season.

The season series between these two teams was an intriguing one.

They faced each other twice in three nights at the end of October, with each team coming away with a win behind five goals; Minnesota won 5-3 on Saturday, Oct. 26 and the Hawks came back and won 5-1 on the following Monday night. Niklas Backstrom was in net for both of those games, and the road team was victorious in each.

Minnesota won in the United Center again on December 5, this time a 4-3 victory with Josh Harding in net.

On January 23, the Wild beat the Blackhawks 2-1 in Minnesota. This time, Darcy Kuemper was in net for the Wild.

The fifth and final meeting between the two came on April 3 in Chicago, with the Hawks winning 3-2 in a shootout. Ilya Bryzgalov was in net for the Wild in this meeting.

Corey Crawford started four of the five meetings, winning twice and losing in regulation twice. He posted an .886 save percentage against Minnesota; the 12 goals he allowed to Minnesota were his highest against any team during the 2013-14 season.

The key to the series may be an unknown – the health of Kuemper. Since replacing Bryzgalov in the Minnesota net, Kuemper was 3-1-1 with a .913 save percentage entering Game Seven. However, he was forced to leave Game Seven after Colorado’s fourth goal because of injury.

52 thoughts on “Round 2: Blackhawks vs Wild Preview”