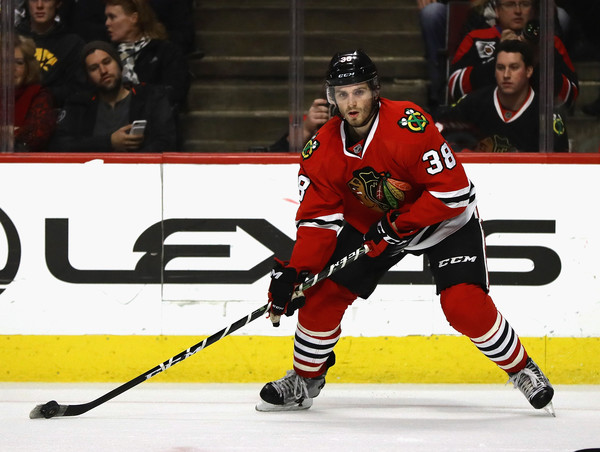 Sunday was a significant night for Blackhawks coach Joel Quenneville.

It turned out Sunday would also be a huge night for Ryan Hartman as well.

Coming into the game against Nashville, the Blackhawks had won their previous two games in very different ways. Chicago allowed three goals and needed overtime time to beat Buffalo despite allowing only 20 shots on Thursday, but beat Carolina 2-1 while allowing a season-high 40 shots on net on Friday.

So which Blackhawks team would show up against division rival Nashville on Sunday?

Over the first two periods, the Thursday night Blackhawks were on the ice. Artemi Panarin got the party started 7:45 into the first with a ridiculous shot.

Before Gene Honda could read the scoring to the United Center crowd, Mattias Ekholm tied the game at one. Ekholm and Mike Fisher took advantage of an ugly Jordin Tootoo turnover and were able to beat Crawford.

Less than six minutes later, Niklas Hjalmarsson unloaded a shot from the point with Artem Anisimov parked in front of Pekka Rinne.

Hjalmarsson’s fifth of the season gave the Blackhawks a 2-1 lead as Chicago out-shot the Preds 7-6 in the first.

The second period came and went with some good chances for both teams but neither team scored. After 40 minutes, the Hawks held a 23-17 shot advantage and had successfully killed two penalties.

As the third period began, it appeared Friday night’s Hawks were set to make an appearance.

Two minutes into the third period, a mess around the crease ended with Austin Watson tying the game with his second of the season and Nashville’s second of the night. Nashville put the first six shots of the period on net and were putting pressure on the Hawks for the first ten minutes.

Michal Kempny had a rough couple shifts in the middle of the period that were covered up by strong play from Crawford. One such shift saw Kempny turn the puck over twice and Hartman courageously blocked a shot with his upper body to keep the game tied.

But at 11:49 into the third, a scramble in front of Rinne ended with the puck in the net, the net off the posts, and an official signaling a good goal for Chicago. The play was reviewed and Hartman was credited with the goal, giving the Blackhawks a 3-2 lead.

Rinne went to the bench with 100 seconds left in regulation, and the Blackhawks cashed in less than 30 seconds later. Hartman flipped a puck into the offensive zone that was rolling toward the empty net and Richard Panik almost tapped it in to steal credit for the goal, but the goal was credited to Hartman.

Rinne went to the bench again after Hartman’s second goal and the Hawks put another one home. Hartman scored his third goal of the third period to close out his first career hat trick; he now has 10 goals on the season.

When the dust settled, the Blackhawks had a 5-2 victory. Chicago out-shot Nashville 31-27, and the Backhawks also blocked 23 shots. Crawford stopped 25 in a strong win between the pipes.

Hartman was the well-deserved Number One star of the night with his three goals. He skated 13:35 on the third line with Panik and Tanner Kero and was credited with one blocked shot and two hits. Hartman led the Hawks with five shots on net.

Patrick Kane was credited with three assists in 19 minutes on the ice. Hjalmarsson added an assist to his goal for a multi-point night as well. Duncan Keith blocked five shots and had an assist while Hjalmarsson blocked four shots for the Hawks, who have now won three in a row.

Jonathan Toews won 13 of 20 faceoffs, blocked two shots, was credited with two hits and one takeaway in 19:42.

Next up for the streaking Blackhawks is a home dance with Detroit on Tuesday night.

Big win tonight. Big win by USA world juniors too. Now we all get to see @JonathanToews pay up pic.twitter.com/Aq5XlyWtfa