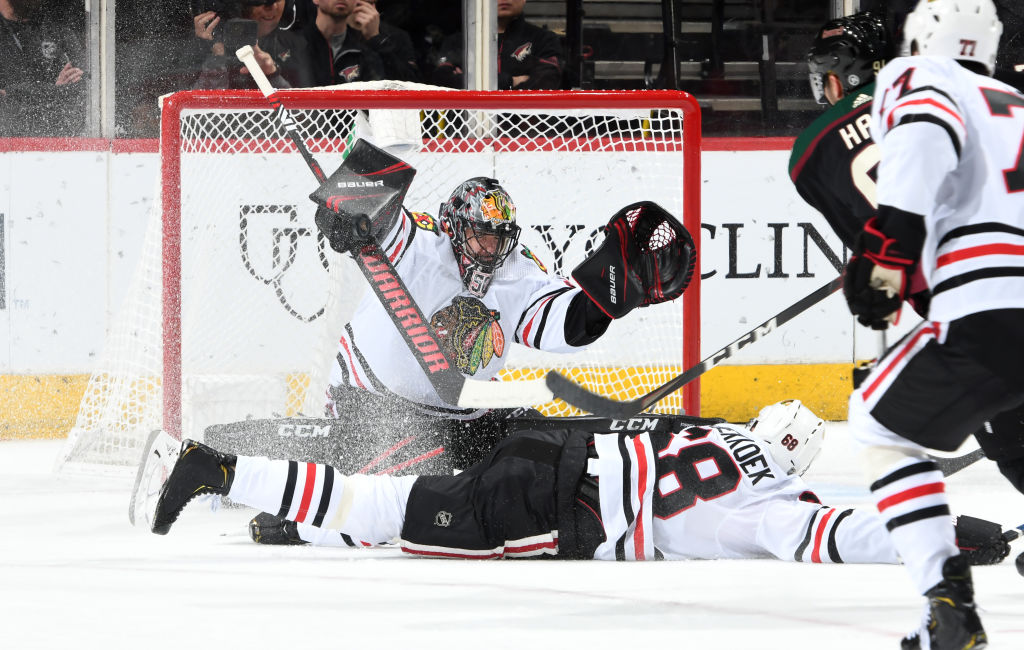 After what felt like a year away for the all-star break and then the bye week, the Chicago Blackhawks returned to action on Saturday evening in Arizona with some reinforcements in the lineup. Dylan Strome returned after missing time because of an ankle injury and found himself back on a line with Alex DeBrincat – but on the wing.

Matthew Highmore and Dennis Gilbert were the healthy scratches for the game against an Arizona team four points ahead of Chicago in the Western Conference.

Before the game, Kubalik was named the NHL’s Rookie of the Month for January. Kubalik led all rookies in goals (10) and points (14) in 10 games in the first month of the calendar year.

While Kubalik and Toews have been terrific together since the start of 2020, the line that is most intriguing and exciting on paper from the above setup is Saad-Dach-Kane. Kane came into the game with an 11-game point streak. Saad had been hot after returning from injury, scoring in three straight and Dach had points in the Hawks’ final two games before the long layoff.

So how would the new-look Hawks lines play against a struggling Coyotes team? And how would they hold up against Arizona’s throwback Kachina jerseys?

Not surprisingly, Arizona looked more fresh in the first period. The Coyotes were playing their third game since the all-star break but were without Oliver Ekman-Larsson.

While the Coyotes looked more ready to play when the puck dropped, the Hawks did a good job of generating chances with most of the new lines. And 12 minutes into the game that sexy new second line cashed in. Kane set up Saad and he sniped one home to give Chicago a 1-0 lead.

Saad’s 14th of the season was the only goal of the opening 20 minutes. Kane’s assist on the goal extended his point streak to an NHL-leading 12 games.

Even though the Blackhawks had two power plays to Arizona’s one in the first period, the Coyotes held a 12-11 shot advantage after the first. Corey Crawford was on point in net.

Less than five minutes into the second period the second line went to work again. This time Dach got the puck to Kane who, once again, set up Saad for the goal.

Saad’s 15th of the year came off Kane’s 40th assist of the campaign. Dach extended his personal point streak to three games with the secondary helper.

In the middle of the second period Corey Crawford fought off a shot from the side of the net. Unfortunately, the rebound was left on the doorstep and Brad Richardson flipped in his fourth of the season to cut Chicago’s lead in half.

Rookie Adam Boqvist continued to work with Duncan Keith on the blue line and that pair continued to be impressive. The chemistry they have developed over the past month is impressive and they played off each other nicely, creating a few scoring chances in the game’s opening two periods.

With 100 seconds left in the period Slater Koekkoek made a brutal decision and it came back to hurt the Hawks. Conor Garland, playing in his 100th career regular season game, scored his 17th of the season to tie the game.

Chicago got another power play in the closing seconds of the middle period but weren’t able to score. The Hawks carried 1:37 of advantage time over to begin the third period with Jakob Chychrun in the box.

After dominating the opening half of the second period – a stretch that saw the Blackhawks credited with 10 of the first 11 shots on net – the Hawks finished with a 16-12 shot advantage in the period. Unfortunately, the score was tied after 40 minutes. The Blackhawks appeared to have some tired legs in the final eight minutes of the period and it cost them.

The Hawks were getting smoked at the dot through 40 minutes; Arizona won 59 percent of the faceoffs in the first two periods. Jonathan Toews won seven of 12 in the first two periods. Though Dach was listed as the center on the second line, Saad (four) had taken more faceoffs than Dach (three) through two periods. At some point, if the Blackhawks see Dach as a center, they’re going to have to let him take more frequent faceoffs. Colliton appears to be tentative to give the kid too many chances.

DeBrincat continues to struggle to get on an offensive roll, but he was active early with Strome back on his line. He led Chicago skaters with five shots on net in 9:51 in the first two periods.

Antti Raanta made a huge save on a terrific look for DeBrincat with 17 seconds left on the power play that carried over to start the third period. Dach flipped a puck around his back while engaged in front of the net to a wide open DeBrincat but Raanta was there in time. The Coyotes escaped the short-handed time; Chicago was 0-3 on the power play.

With 15 minutes left in regulation Crawford returned the favor. Taylor Hall appeared to have a wide open cage after receiving a nice pass from Garland but Crawford took away the angle and stoned Hall.

After the Hawks got three straight power plays Arizona got a couple in the first 12 minutes of the third period. Olli Maatta took a seat at 6:48 and Toews was banished for two minutes at 10:03 but the Coyotes failed to score on either advantage.

On a night full of incredible saves, Raanta stealing what could have been a third goal for Saad was the most amazing.

Raanta and Crawford made a few more big saves but the final two minutes saw two teams willingly waste time to pick up a point in the standings.

Arizona held the puck alone behind their net for the final six seconds of regulation without any effort to move it up the ice. Regulation came to a close with the score still tied at two.

The Blackhawks had a 41-38 shot advantage after 60 minutes of hockey. Dach actually got some work at the dot in the third; he finished regulation winning one of seven faceoffs. Toews won half of 20 faceoffs in regulation.

On to overtime we went.

The opening two minutes of overtime was overwhelmingly in favor of the Blackhawks. Saad had a couple good looks and then Kubalik stripped Nick Schmaltz and got a breakaway with 3:15 left in overtime but Raanta was able to come out and make another huge save.

Raanta forced a shootout with some tremendous saves. Erik Gustafsson got dumped by Derek Stepan in the final minute to end a Hawks possession and send the game to the skills competition.

Kane then took his time waiting for Raanta to commit and was able to flip a backhand over Raanta.

Crawford stoned Garland and the Blackhawks skated off with the second point.

Boqvist skated 16:05 and led the Hawks with five blocked shots. He was, somehow, the only Blackhawks defenseman without at least two shots on net.

DeBrincat led all skaters with eight shots on net. Saad was credited with five and Kane put four on net.

Dach put two shots on net and was credited with one assist in 19:54.

Nylander was the only skated on the Chicago roster with less than 11 minutes of ice time. He was limited to 9:49.