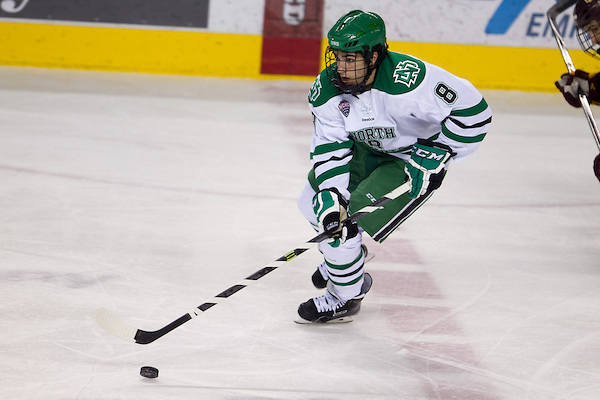 With the Blackhawks still looking for a first round pick in this week’s NHL Draft, let’s look at what some other outlets have said about Chicago’s prospect pool.

The Hockey News‘ Ryan Kennedy named Nick Schmaltz the Blackhawks prospect of the year. He added: “Edging out Ville Pokka for the Hawks award, Schmaltz was one of North Dakota’s top scorers as a college freshman – not easy on that squad.”

In their review of the Blackhawks’ pipeline from the 2014-15 season, Hockeys Future named Mark McNeill the organization’s prospect of the year, saying:

“There may be some slight controversy with the recipient of the Prospect of the Year award. Ever since the 2014-15 season began, all eyes were on Teuvo Teravainen, the flashy Finn whose potential for top-six stardom has had Blackhawks fans eagerly awaiting his full-time arrival to the NHL. While Teravainen did join the Blackhawks at the last half of the season and looked quite good, there was another former first-round pick who had a stellar year in his own right.

The IceHogs have had a phenomenal 2014-15 season, and they can partially thank Mark McNeill for that. The 22-year-old forward was one of Rockford’s most consistent point producers throughout the season, earning 44 points (23 goals, 21 assists) in 63 games for the IceHogs. McNeill continues to earn the trust of head coach Ted Dent, who has used McNeill on both the power play and penalty kill units. There has been some chatter about McNeill’s future with the Blackhawks, seeing as how he was never one of the club’s call-ups throughout the year. Don’t be surprised, however, if McNeill earns a roster spot with the Blackhawks come opening night.”

In their spring update to their top 50 prospect rankings, HF had only one Hawks prospect listed (Teuvo Teravainen at #10)