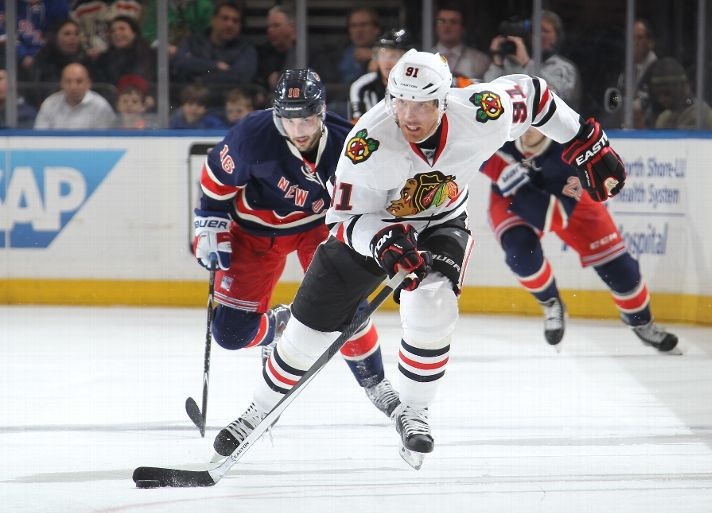 Against the top team in the league at Madison Square Garden, Scott Darling collected his first career shut out in spectacular fashion as Brad Richards scored the game’s only goal. Richards patiently waited with the puck and beat Cam Talbot for his 11th goal of the season at 7:31 into the third period, a tally that would hold-up as the game-winner. Richards was honored by the Rangers early in the game after helping lead New York to the Stanley Cup Final last season, and came back to bite the team that bought him out soon after their loss to the Kings.

Talbot was fantastic in the game, stopping 30 of 31 in the loss, including 17 shots in the third period after the Hawks put only 14 on net in the game’s first 40 minutes.

But the story was Darling.

Darling made 25 saves, many in traffic – especially in the third period – and a handful when his team needed him most.

The Hawks blocked 12 shots in front of Darling, but a few careless passes (like the one by Brent Seabrook above) put Darling in a tough spot. But the rookie was up to the challenge. Brandon Saad led Chicago with three blocked shots in the game.

Richards played an inspired game against his former teammates, putting a team-high six shots on net in the game while winning six of eight faceoffs.

Chicago’s top line played another strong game but failed to register a point. Patrick Sharp had a couple good looks at the net late but, as has been the case all season, failed to finish. He was credited with three hits and five shots on net in 18:37, while Jonathan Toews and Marian Hossa were only credited with one shot on net each a night after they combined to score all four of the Hawks goals.

Joakim Nordstrom returned from his two-game suspension and replaced Kris Versteeg in the lineup. Nordstrom skated 12:11 in the game, including 1:59 on the penalty kill where he stepped back into the role he assumed next to Marcus Kruger when Ben Smith was dealt at the deadline. The Hawks successfully killed both of the Rangers power plays on Wednesday evening.

Kimmo Timonen skated only 7:30 in the game as he continues to get his legs back. David Rundblad dressed in place of Michal Rozsival and blocked two shots in 14:15.

Bryan Bickell was on the ice for only 10:20 in the game, the lowest ice time total among Chicago forwards. He was credited with two hits and one shot on net in 16 shifts.