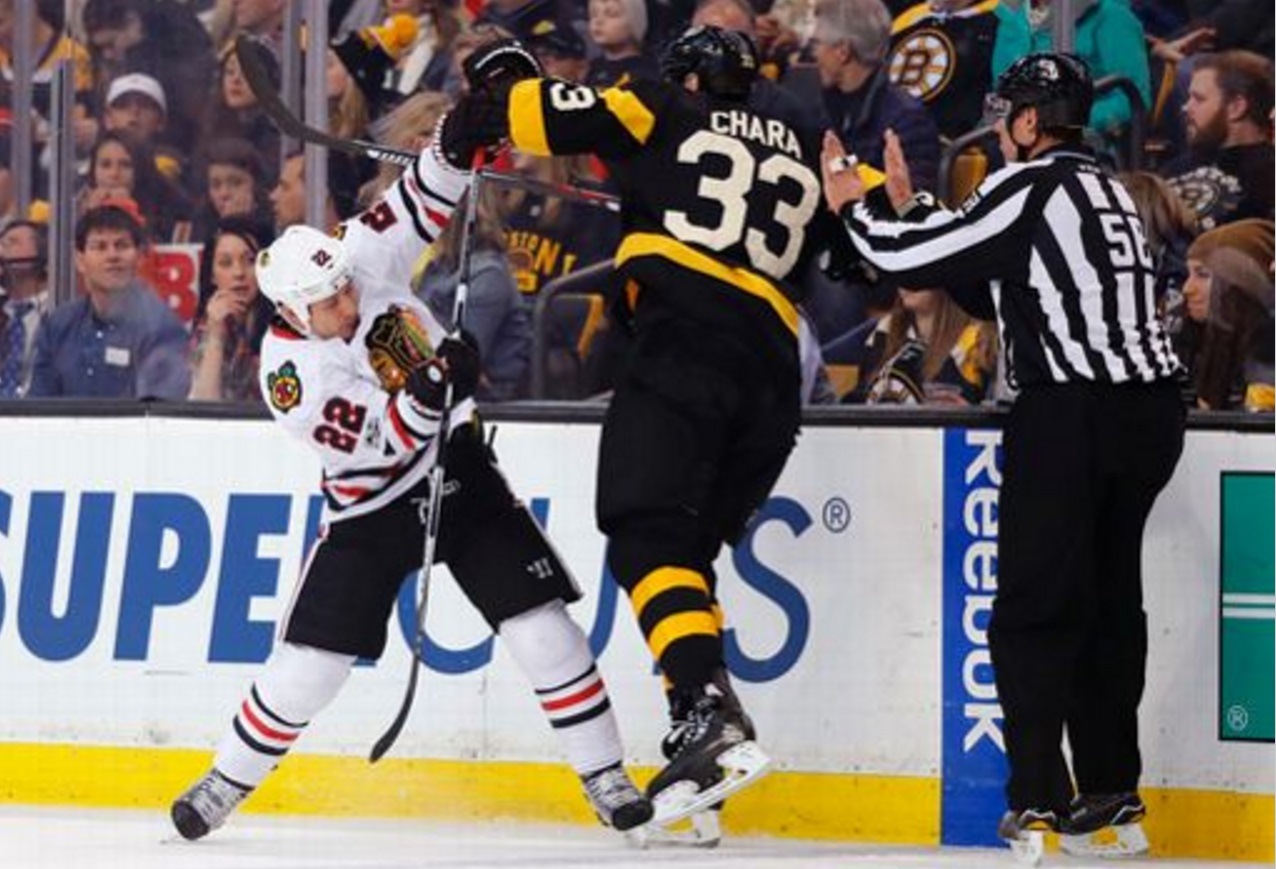 The Blackhawks played in Boston on Friday night. The dads – and a few sons – showed up for the game. As did Scott Darling. Beyond that…

In the first period, Boston out-shot the Hawks 17-6 without having a single power play. In the second, each team had one full power play and Chicago had 24 seconds of an advantage to end the period; both teams were credited with eight shots on net in the middle frame.

So, in review: Darling stopped 25 shots in 40 minutes. Tuukka Rask faced only 14. The score was tied at zero.

Toews got caught hooking Brad Marchand as the second period came to a close to wipe out the final 1:36 of the Chicago power play. The third period started 4-on-4 without any scoring, and Chicago killed the 24-second advantage with Toews in the box to keep the score sheet empty.

Chicago got a power play 7:14 into the third with Ryan Spooner in the box, but the best chance in the two minutes came from Brad Marchand.

The Hawks’ third line of Vinnie Hinostroza, Tanner Kero and Marian Hossa had another good night – and made the play that counted in the end. With under two minutes left in regulation, Boston iced the puck and coach Joel Quenneville sent the two kids and Hossa out. Hinostroza eluded a defender, passed through traffic to Kero who set up Hossa for a wide open net.

Kero won six of eight faceoffs in the game and was credited with three blocked shots and two assists with his primary assist on Hossa’s game-winning goal.

Boston would try to come back in the final 90 seconds but David Backes skated offside with less than ten seconds left to kill their final chance.

Darling finished with a 30-save shutout in a sparkling performance. As you can see below, Boston had plenty of good chances close to the net but weren’t able to beat Darling.

Predictably, the struggling Bruins put Patrice Bergeron’s line against Chicago’s top line of Panarin-Anisimov-Kane and it showed in the box score. Anisimov won only three of 14 faceoffs against arguably the best faceoff man of this generation, and those three Blackhawks forwards combined to put eight shots on net (five from Kane). Panarin had a good night defensively, however. He led the team with four takeaways and a 54.29 CF%.

Nick Schmaltz skated 11:12 with one hit and two takeaways, and saw 70 seconds of power play time in the win.

Darling became the first Blackhawks goaltender to shutout the Bruins in Boston since Tony Esposito on Jan. 17, 1970.