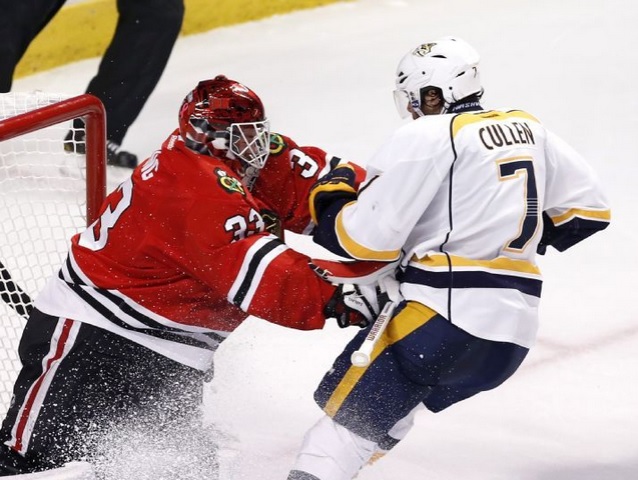 It took 101 minutes of hockey, and didn’t end until Brent Seabrook’s third career overtime game-winning goal 60 seconds into the third overtime, but the Blackhawks successfully took care of business once again at the United Center. Chicago will head to Nashville with a 3-1 series lead after Wednesday morning’s 3-2 victory.

Seabrook’s goal, scored at 1:17 AM in Chicago, was the highlight but the story of the series continues to be Scott Darling. He stopped 50 of 52 shots in Game Four, and has now made 127 saves against 131 shots in the series. As Nashville dominated the Blackhawks over the final ten minutes of the second period, Darling kept his teammates in the game by making a number of huge saves. Darling has been a revelation in net.

The Hawks needed three goals to win the game, however, and were happy to (finally) get a contribution from a trade deadline acquisition. Less than 90 seconds after Colin Wilson scored his fourth goal of the series to give Nashville a first period lead, Antoine Vermette perfectly redirected a Michal Rozsival pass past Pekka Rinne for his first goal in a Chicago sweater.

With the monkey off his back, Vermette played a strong game. He finished the night winning 12 of 20 faceoffs and was credited with two hits and two shots on net in 19:20, but was as active as he’s been in any game since being acquired from Arizona.

The second period was all Predators, and the Hawks were lucky to escape chasing only one goal. Nashville out-shot the Hawks 14-7 in the middle period, and were credited with 10 of the final 11 on net as they blitzed the Blackhawks. If not for Darling, the score could have easily been 3-1 or 4-1; at the same time, if not for a mental lapse by Duncan Keith, the game could have been tied at one as well.

That brain fart by Keith opened the door for James Neal to score his first of the series. Over the first two periods, Neal and Mike Ribeiro spent more time trying to get under the Hawks’ skin than they did playing the puck, but Neal was able to capitalize on Keith’s error and get on the board.

From there, the Hawks followed the script from Game Three… except there were two full periods between Brandon Saad tying the game and Seabrook winning it.

With the Hawks finally finding some pace to their game in third period, Saad took a pass from Marian Hossa and ripped a shot past Rinne to tie the game. When the horn sounded and 60 minutes of hockey were complete, Darling had made 30 saves.

Darling would face 20 more shots in the first and second overtime periods, stopping them all.

Keith made up for his mistake with some fantastic play in the overtimes, and ended the night skating more than 46 minutes. To coach Joel Quenneville’s credit, and even with Kimmo Timonen only skating 12:18, Keith was the only Blackhawks defenseman to play more than 37 minutes. On the other end of the ice, Peter Laviolette relied on four defensemen the entire night and each of them – Roman Josi, Seth Jones, Mattias Eckholm and Ryan Ellis – were over 42 minutes in the game.

Jonathan Toews finished the night skating 29:56 and spent a lot of that time being held by Predators away from the play. Nashville appeared to make harassing Toews a priority on Tuesday night, but their strategy failed – just as it did for Detroit in 2013. Chicago’s captain won 21 of 38 faceoffs and was credited with five hits and one takeaway in the game.

The ice time leader among Hawks forwards was Patrick Kane, who was on the ice for 34:55. The final seconds of that long night included the pass setting up Seabrook’s game-winner, giving Kane four points in as many games in the series. Hossa skated 33:56 and picked up the primary assist on Saad’s game-tying tally. Kane and Hossa were credited with four shots on net, two missed shots, two hits and one takeaway each.

Seabrook and Bryan Bickell led the Hawks with six hits each, and Bickell was credited with the secondary assist on the game-winner. He provided a solid screen on the play, and lowered the boom and Neal and Ribeiro during regulation time. Keith led the Hawks with seven shots on net.

Johnny Oduya played 37:01 and led the Hawks with six blocked shots, and played arguably his best game since returning from injury. He was also credited with three hits and one shot on net.

Given the short turnaround before playing Game Five in Nashville, the Blackhawks may look to their depth to rest some veteran legs. Teuvo Teravainen and Joakim Nordstrom were healthy scratches on Tuesday night.