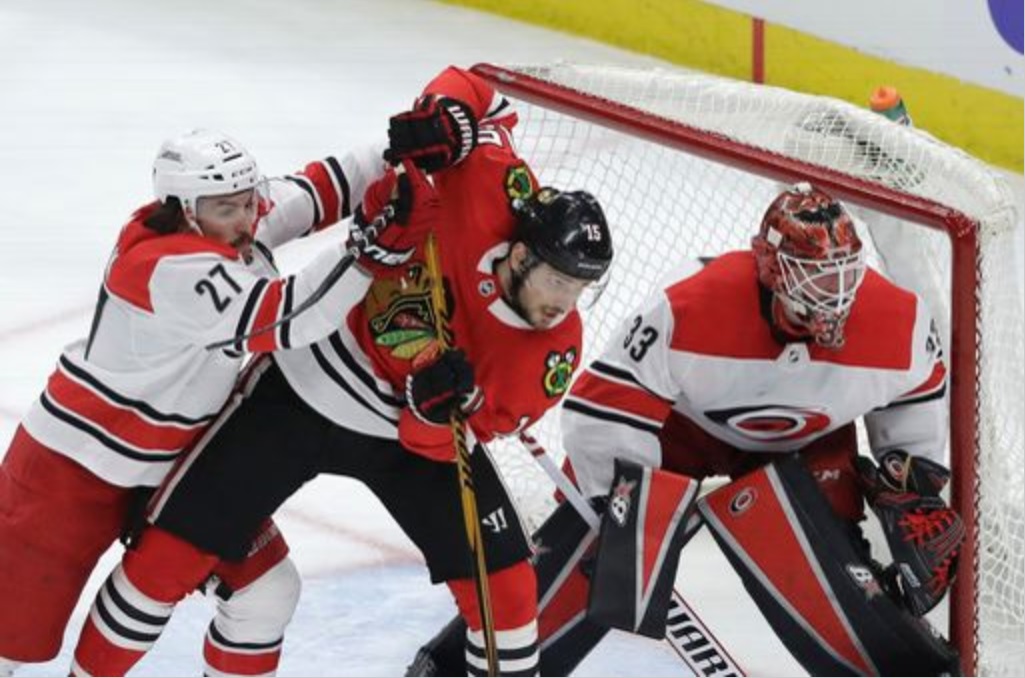 In what has become a consistent theme for an inconsistent team, the Blackhawks followed up a strong performance against a playoff hopeful team with a mediocre night.

Carolina came into the United Center with Lemont native Scott Darling between the pipes, Teuvo Teravainen in the starting lineup and a handful of former Blackhawks in the lineup and behind the bench for the Canes.

Chicago got on the board first when Tomas Jurco tipped home a Brent Seabrook shot.

Because the Blackhawks hate having a lead this year, they held this one for only 4:30 before Jaccob Slavin scored a tying goal.

However, the mighty Blackhawks roared back and regained the lead on a Patrick Sharp goal less than five minutes later.

The first period would end with the Hawks being out-shot 11-9 but clinging to a 2-1 lead.

That lead wouldn’t last 70 seconds into the second period as Justin Williams, who started the period in the penalty box, tied the game.

With the game tied for almost 19 full minutes and the only penalty being called on David Kampf, the Blackhawks were out-shot 17-5 in the second period.

JF Berube was terrific all night and was truly the only reason the Hawks weren’t chasing a few heading to the third period.

In that third period, the Blackhawks would allow a go-ahead power play goal to Sebastian Aho while Sharp was in the box. Chicago would try, especially late, but never found an answer to the Aho goal. Darling was good when he needed to be.

Berube went to the bench for the extra attacker with two and a half minutes left in regulation but the Blackhawks managed to do nothing and lost to Darling and the Canes.

Three Blackhawks finished tied for the team lead with three: Jurco, Sharp and Kampf. Seabrook and Erik Gustafsson blocked four each to lead the team. And the top line of Jonathan Toews, Patrick Kane and Brandon Saad managed one shot on goal each.