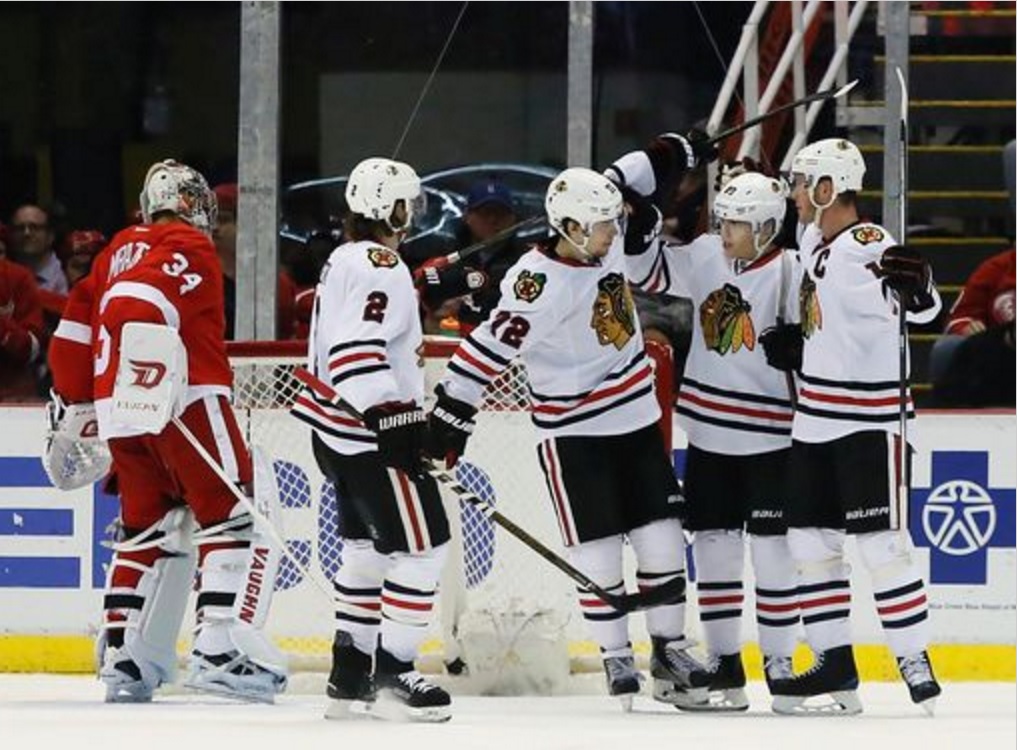 Only 2:23 into the game, Brent Seabrook started a big night with a missile to put Chicago on the board. He had all day to skate in and unload; even though he had a good look at the shot, Petr Mrazek couldn’t catch up with the heater.

The rest of the first period was incredibly close, however. Both goaltenders made eight saves in the opening 20 minutes, with the difference being the one shot that got past Mrazek.

Each team had to kill part of a penalty early in the second period as Andrew Shaw went off for hooking but Dylan Larkin did the Hawks the favor of killing the final 70 seconds when he hooked Jonathan Toews. Each team had a few good chances, with Corey Crawford playing exceptionally well in the first half of the game.

Ten minutes into the second period, Jonathan Ericsson boarded Andrew Desjardins – an incredibly dangerous play – and would have somehow escaped having a penalty called… except he received a roughing minor when Desjardins got up, chased him down and threw a few punches. Desjardins received a double-minor on the play and went straight to the dressing room for most of the remainder of the period. Chicago killed the Detroit power play again.

At 13:22, well behind the play, Henrik Zetterberg celebrated his 900th career regular season game with a terrible penalty, tripping Andrew Ladd. Only 47 seconds later, Niklas Kronwall joined his captain in the penalty box when he hooked Patrick Kane.

With a 5-on-3 opportunity, the Hawks made Detroit pay dearly.

Only 25 seconds after Kronwall went to the box, Kane threw a gorgeous pass across the crease to a wide open Artemi Panarin and his one-timer was true.

The Hawks remained on the power play, and 84 seconds after Panarin’s goal the Hawks added to their lead. Detroit desperately got the puck out of the zone, but only as far as center ice. Instead of getting off for a change, a tired Justin Abdelkader went for a big hit on Seabrook; the Hawks veteran defenseman was able to advance the puck up the ice to Kane, who made the score 3-0 in favor of the visitors.

Seabrook picked up an assist on both power play goals, giving him three points through two periods.

Crawford faced a fee flurries from the Red Wings in the second period and faced 24 total shots in the opening 40 minutes, but did not allow one to get past him. Mrazek was on the hook for all three of the Hawks’ goals against 22 shots through 2 periods.

Kane went to the box for slashing and an old friend ended Crawford’s shutout bid. Brad Richards got a clean shot off from the point with Luke Glendening providing a good screen and the Wings were within 3-1.

Just a few moments after the Richards goal, the Wings had another good chance but Dennis Rasmussen made a great play to come back and take the puck away. Rasmussen had a strong night in limited action as the fourth line center.

Andrew Ladd picked up his first goal in his return to the Blackhawks 14 minutes into the third, making the lead three once again. Mrazek made a couple incredible saves but couldn’t control a rebound and Ladd was able to put a third shot in.

Chicago wasn’t done, however. Panarin, in front of a nationally televised audience against anothe Calder Trophy front-runner in Dylan Larkin, scored his second goal of the night and 35 seconds later. The goal, Panarin’s 24th of the season, came off another beautiful cross-ice pass from Kane.

With the assist on Panarin’s second goal, Kane tied his career high of 88 points. Jamie Benn led the league last year with 87 points in a full season. There are 17 games left in the regular season.

Detroit added a too little, too late goal to cut the lead to 5-2, but that was it for the scoring on the night.

Seabrook, who wasn’t named to Canada’s preliminary roster for the World Cup of Hockey, had the second four-point night of his career. Good job, good effort, Canada. UPDATE: Seabrook’s assist on Ladd’s goal was given to Toews after the game, making it a three-point night for Seabrook.

Christian Ehrhoff made his Blackhawks debut and looked comfortable throughout. He saw power play time in his first game with the Hawks. He led the Hawks with six attempted shots (four on net, two missing) in more than 16 minutes of ice time.

Crawford finished with 31 saves against 33 shots.

The Hawks are back on the ice in Boston on Thursday night and might have Dale Weise in the lineup.