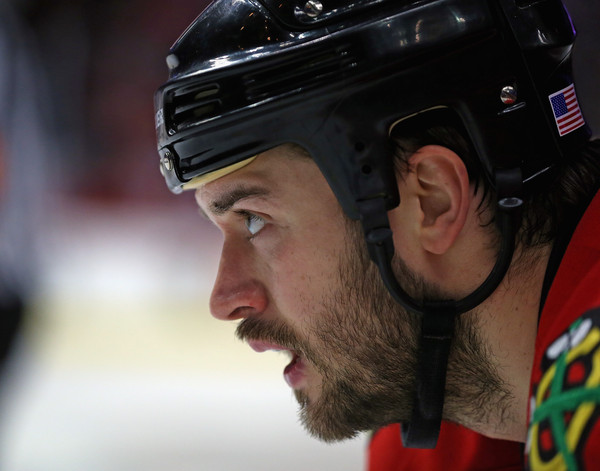 On Wednesday the Blackhawks called up Dylan Sikura and Carl Dahlström.

Is that all it took?

For the first time in 11 games, the Blackhawks scored the first goal in a game. And it was a fourth line goal as Andreas Martinsen was credited with his first of the season.

Dahlström and Marcus Kruger picked up assists on Chicago’s enormous first goal of the night.

If the Martinsen goal was lucky, Brent Seabrook’s goal three minutes later was the polar opposite. On the night he moved past Bobby Hull into second place all-time in games played for the Chicago Blackhawks, Seabrook fired a missile home to give the Blackhawks a – gasp! – two-goal lead.

Jonathan Toews was credited with the only assist on Seabrook’s fourth of the year.

After having a lead for 41 seconds over their previous 11 games, the Blackhawks suddenly had a two-goal advantage against a team in playoff position in the Eastern Conference.

Of course, not all good things last very long for these Blackhawks. Bryan Rust, who could have been the story of the night, scored his first of the night less than one minute after Seabrook’s goal to cut the lead in half.

Rust hadn’t scored in 21 games entering Wednesday night. He had one goal all year coming into the game.

But the opening period would come to a close with the Hawks holding a lead. The shots were 13 for both sides after 20 minutes but the Hawks had the lead.

Rust tied the game at 5:46 into the second period. Because of course.

Almost ten minutes later the Blackhawks got their first power play of the game and – gasp! – took advantage. Alex DeBrincat scored to take the lead once again.

Patrick Kane and Seabrook picked up helpers on the DeBrincat PPG.

Pittsburgh kept bringing it, however, and Corey Crawford hung on as long as he could. But inside the final minute of the second period Rust finished the second hat trick of his career to tie the game at three.

The Penguins out-shot the Hawks 17-8 in the second period and the game was tied heading to the third.

Which hilariously unlikely outcome would be completed: Rust winning a game by himself or the Hawks ending their losing streak?

Just under four minutes into the third, Marcus Kruger scored what would prove to be the game-winning goal.

Martinsen and Duncan Keith had the assists on Kruger’s fourth of the year. Chicago’s fourth line had a huge night, bringing energy and – most importantly – production that the team desperately needed.

Crawford kept making huge saves and the Hawks were able to pull away in the final minutes. Toews and Brandon Saad both scored into an empty net to close the books on a stunning 6-3 victory on home ice for the Blackhawks.

With a goal and an assist tonight, that's 700 points for @JonathanToews!#OCaptain pic.twitter.com/gFOfLZFtNk

Dahlström was noticeable from the jump. He put three shots on net, picked up an assist and was credited with one hit in 22:34 on the ice in his first NHL game of the season. Only Keith and Seabrook were on the ice longer on Wednesday night.

His performance is an aggravating reminder that this kid could have been here all season, but the Hawks have been playing Jan Rutta, Brandon Manning and Brendan Davidson instead.

Toews led the Hawks with three points (one goal, two assists). He also won nine of 20 faceoffs and was a team-high plus-three in the game. Dylan Strome won eight of 18 faceoffs and skated 65 seconds more than Toews in the game.

Saad was also plus-three in the game and had two points. Kruger, Martinsen and Seabrook also had two-point nights.

The only Chicago forwards to skate over 20 minutes in the game were Kane and DeBrincat. Sikura was limited to 9:33 in his first NHL action of the season as coach Jeremy Colliton shortened his bench with a lead in the third period.