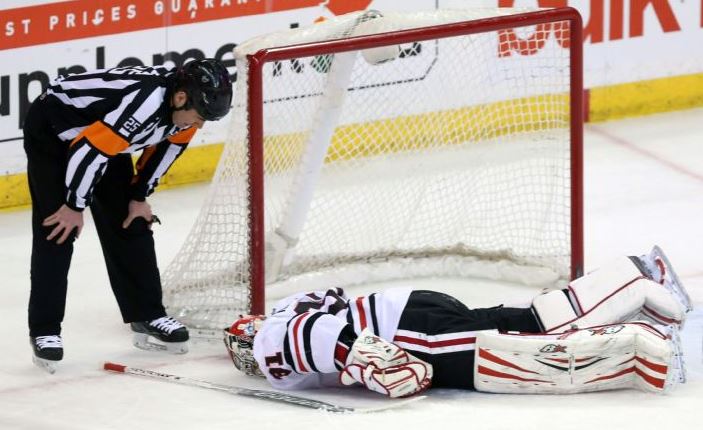 They looked terrible in Ottawa on Friday.

Somehow, the Blackhawks scored two special teams goals in a game that showed very little jump from the team one night after getting shutout in Boston. Down 3-0 early in the second, Patrick Sharp scored a power play and Marian Hossa made the ridiculous play above in the middle frame to draw the Blackhawks back from to within only one goal.

Matt Carey made his NHL debut, and it was a rough night for the recently signed college star. He deflected in Ottawa’s first goal of the night, and was in the penalty box when the Sens scored their fourth goal and grabbed momentum back from the Hawks early in the third.

Peter Regin joined the lineup in place of Teuvo Teräväinen, and was credited with an assist on Brent Seabrook’s short-handed goal late in the third. Regin (8:23) and Carey (7:53) didn’t see much of the ice one night after Jeremy Morin and Teräväinen skated in Boston.

Antti Raanta started for the Hawks and struggled throughout the night. He appeared to be injured in the first period, grabbing his right leg and staying on the ice with the Hawks already trailing 1-0. But he convinced the trainers and coaches to leave him in the game.

Shortly after the injury, Brandon Bollig dropped the gloves with Chris Neil. Predictably, the fight did nothing to spark the Hawks and Chicago trailed 2-0 when the first period ended.

After allowing a third goal only 23 seconds into the second period, the Hawks appeared to wake up; they dominated the final 19 minutes of the period and were within striking distance when the third period began.

The third period was as much of a debacle as the first, though. Two more Ottawa goals in the opening 11 minutes led to frustration from Chicago, and cheap shots by the Sens led to costly retaliation from the Hawks.

Neil tried to make a dangerous, knee-on-knee hit on Niklas Hjalmarsson in the second period that went unpenalized. In the third, jousting away from the puck slowly brought the Hawks’ to a boil and Andrew Shaw was the player that finally snapped. At the end of a power play, Shaw was engaged by Zack Smith and a series of whacks and punches led to Shaw receiving three penalties: a five-minute major for spearing, a two-minute minor for roughing and a game misconduct.

The Hawks have been outscored 8-3 in the last 30 hours, and travel to play in Pittsburgh on Sunday.