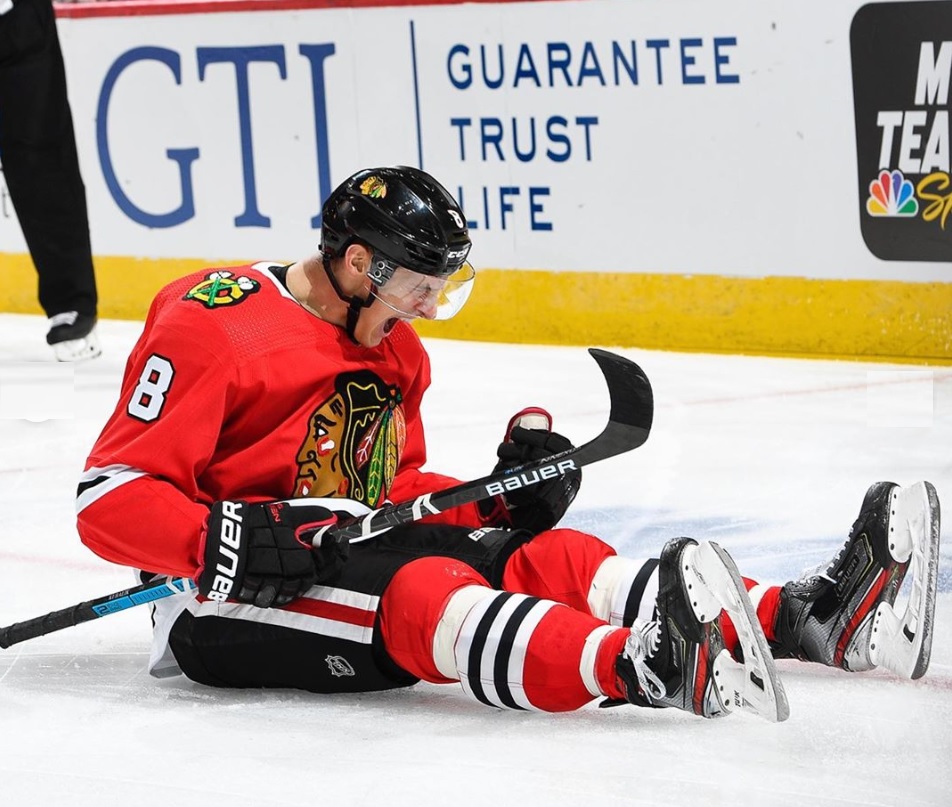 Remember when the Blackhawks had “fixed” their defense?

The San Jose Sharks came into the United Center 0-4-0 on the year. The Hawks were playing just their second game of the year after traveling back from their loss in Europe.

Both sides looked like they had bet the over.

Dominik Kubalik scored the first home goal of the 2019-20 season for Chicago at 5:07 into the first period.

Brandon Saad picked up the assist on the Kubalik goal.

San Jose answered with a Kevin Labanc power play goal to tie the game. Remember when special teams were supposed to be better?

Andrew Shaw took the lead back with his first of the season at 13:22 into the first. The United Center clearly never stopped loving Shawzer.

Patrick Marleau signed with the Sharks earlier this week and made his season debut Thursday night. With 17 seconds left in the first he scored his first of the year – a second power play goal in the period for the Sharks – to tie the game.

The Hawks out-shot the Sharks 15-11 in the first period but San Jose was 2-for-3 on the power play. The score was tied at one after one.

Take that script from the first period and copy it to the second. The only change: San Jose scored their two goals at even strength.

Shaw added his second of the night off a fabulous feed from Alex DeBrincat.

Dylan Strome grabbed the lead back at 12:14 into the second, scoring his first of the season.

But… Marleau scored late in the period to tie the game. After 40 minutes of hockey both sides had scored four times and both netminders were exhausted. The Sharks out-shot the Hawks 12-7 in the second period; all four goals in the middle frame were scored at even strength.

One of the fatal flaws of the 2018-19 Blackhawks was getting dominated in the second period. Through two games’ second periods thus far, nothing has changed in the new year. There was no consistency in the lines and the chances weren’t good enough. Thankfully the Sharks were an equally flammable dumpster and the game was tied.

So would the teams alternate goals again in the third?

Nope. San Jose broke the pattern and took their first lead of the game when Barclay Goodrow scored at 4:47 into the third.

And Chicago didn’t get much pushback in the first 15 minutes of the third period. The Sharks were out-shooting the Blackhawks by a ridiculous margin (10-4 through 16 minutes of the third) – not a good look for a team that was chasing one in their home opener.

The final horn sounded and the scoreboard read 5-4 in favor of the visitors. Chicago allowed 34 shots on goal and blocked another 18 as a team.

The Alex Nylander experiment may be nearing the end of its honeymoon stage. He was stapled to the bench for most of the third period and didn’t generate offense at the rate many hoped he could after showing flashes of promise in the preseason. He’s starting to feel very… Stalberg-ish.

Calvin deHaan wasn’t ready yet but the Hawks are ready for him to replace Slater Koekkoek in the lineup. Koekkoek skated 14:50 and was the only defenseman in red to not play on the power play or penalty kill. Brent Seabrook led the blue line with four blocked shots and four hits.

Corey Crawford took the loss. He stopped 29 of 34 in the game.