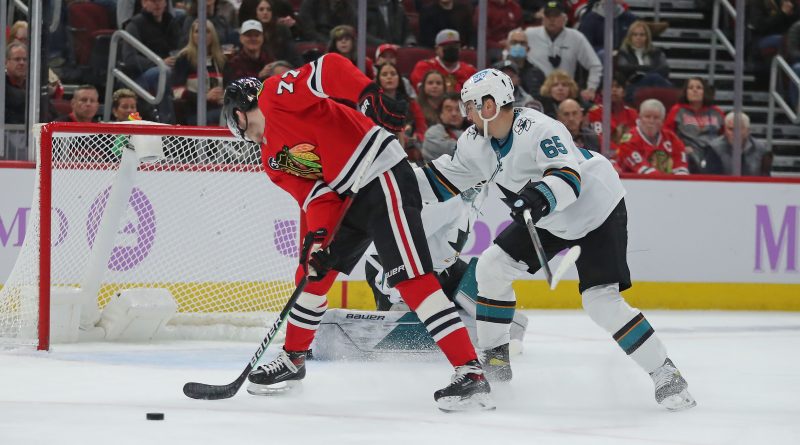 Before we even get started talking about the Blackhawks’ game against the San Jose Sharks, Sunday night was Hockey Fights Cancer Night at the United Center. And it was great to see Troy Murray back in the arena. He is truly a Blackhawks legend and is battling right now. Seeing his smile was wonderful and we’re praying to see more of him in the future.

Now, on to the game itself.

Chicago came out fast and looked good in all three zones in the first period. Unfortunately, they weren’t able to beat James Reimer. The Blackhawks out-shot the Sharks 11-4 in the first period but the score remained tied at zero after 20 minutes.

The second period saw the ice flipped in favor of the Sharks. San Jose carried the action almost the entire period, leading to the Sharks having a 15-9 shot advantage in the middle period. Chicago got one power play that was an absolute gong show. There were a couple big saves by the Hawks collectively; the defensemen pitched in to help their netminder on a couple occasions. One shot nobody could stop came off the stick of Timo Meier at 13:39 into the second.

San Jose took a 1-0 lead to the third period. Reimer and Marc-André Fleury were both having good nights in net. Chicago was credited with nine blocked shots in the first two periods.

Jonathan Toews won seven of ten faceoffs in the first two periods. Even with that, San Jose won 63 percent of the faceoffs over the first 40 minutes. Again, the dot continues to be a significant problem for the Blackhawks — other than Toews.

Eight minutes into the third Brandon Hagel made a strong play by himself and was able to draw a penalty on Brent Burns, giving the Hawks a second power play at a time when they desperately needed one to go well. Their “advantage” has been a disaster over the past ten games, so getting something going would require a change in approach.

Unfortunately, this one produced nothing — again.

Henrik Borgström was having a strong night and got a good chance around the net after the power play ended. He’s been up and down lately, but Sunday night was his strongest performance in his last few outings. Now if he could just buy a goal… of course, that’s true of almost everyone on the Hawks’ roster other than Hagel, Patrick Kane and Alex DeBrincat, but even 88 and 12 are struggling right now.

Still chasing one and desperate for one goal, the Blackhawks sent Fleury to the bench with an offensive zone faceoffs with 2:30 left in regulation. As tends to happen when you’re desperate and leave the cage empty too long, the Sharks found the empty net with a long shot with 91 seconds left in regulation to extend the lead to two. Meier picked up his second of the night.

Reimer made another strong save with about 75 seconds left in regulation before the Sharks iced the puck trying for a second empty-net goal. The two-goal lead was enough and Reimer finished the 29-save shutout.

Toews won 13 of 19 faceoffs in the game. The only other Blackhawks skater to win more than half of his faceoffs (min. four) was Juhjar Khaira, who won three of four. Reese Johnson lost all five of his opportunities and Kirby Dach won three of ten.

Khaira led the Blackhawks with four shots on net and was also credited with four hits. Seth Jones was credited with three shots and three blocked shots in 29 minutes of ice time.