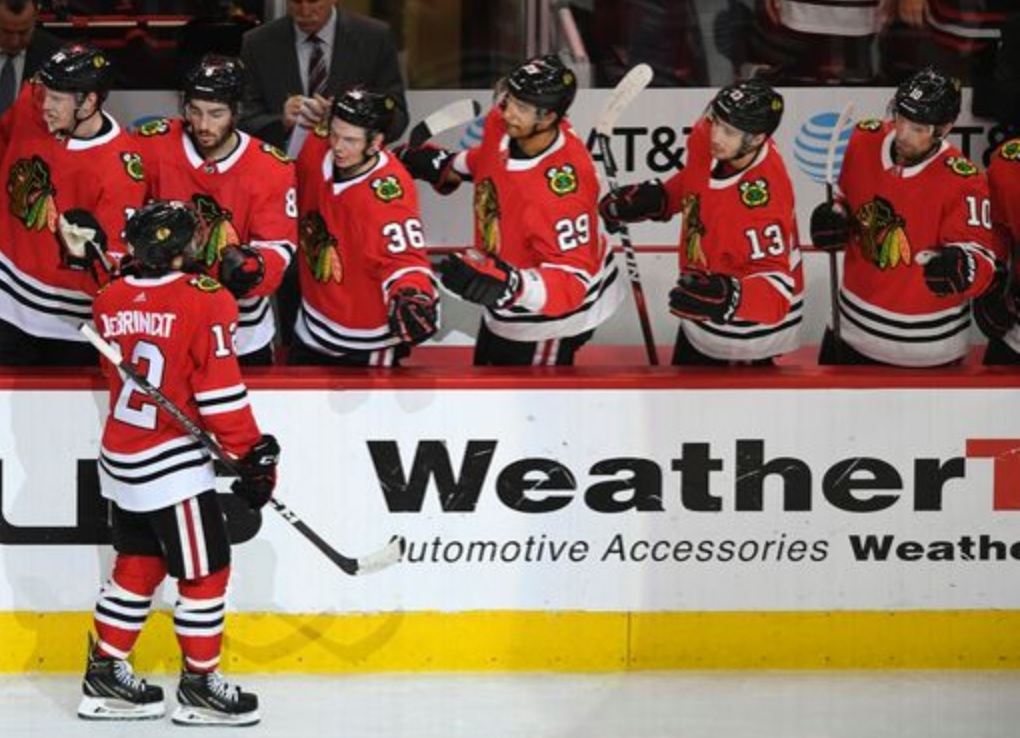 After 20 minutes, the game shouldn’t have been as close as the scoreboard.

Victor Ejdsell made his NHL debut, starting the game between Patrick Kane and Brandon Saad. Marcus Sorensen scored his fifth of the season for San Jose nine minutes into the game but the Hawks dominated the rest of the period.

It was the 26th time DeBrincat has found the back of the net during his rookie season. Saad and Vinnie Hinostroza picked up the assists.

Chicago held an 11-10 shot advantage and 2-1 lead after 20 minutes but the Hawks carried the play for much of the first. Ejdsell looked good and his size was obvious early.

The Sharks looked more like a playoff team in the second. San Jose out-shot the Hawks 15-10 in the second and Evandar Kane scored an ugly goal to tie the game at 16:39. The puck got through Anton Forsberg and there’s no way an NHL goaltender should give that goal up at that point in the game.

Forsberg played fairly well for most of the opening 40 minutes, but the Kane goal was bad.

Fifteen minutes into the third, Murphy took himself out of position to deliver a big hit and it cost his team. Tomas Hertl scored his 21st of the season to give San Jose a 3-2 lead with 4:19 left in regulation.

And less than two minutes later, Patrick Sharp tied the game at three. DeBrincat and Erik Gustafsson were credited with assists on the goal and we headed to overtime.

The Sharks out-shot the Hawks 33-29 in regulation.

In the final two minutes, Kane and Nick Schmaltz had a terrific shift but weren’t able to capitalize thanks to a huge save by Martin Jones. Neither team scored despite good looks from both sides and the game was decided in a skills competition.

Jonathan Toews was a scratch for the game, taking away one of coach Joel Quenneville’s first two shooters.

Patrick Kane was up first for Chicago but was stopped.

Logan Couture was first for San Jose and easily scored.

DeBrincat shot second for the Hawks and tried to go five-hole unsuccessfully.

Joe Pavelski came over the boards and was stopped.

Chris Tierney was then stopped by Forsberg and the shootout went to sudden death.

Schmaltz shot fourth for Chicago and got nothing.

Kevin Lebanc then won it for San Jose.

For his debut, Ejdsell skated 17:25 with two hits and three shots on net. He was minus-three in the game, however, while winning six of 11 faceoffs.

Chicago is expected to welcome another new face to the lineup on Thursday when Dylan Sikura should be available to make his NHL debut.

31 thoughts on “Sharks Swim Past Chicago In Shootout”