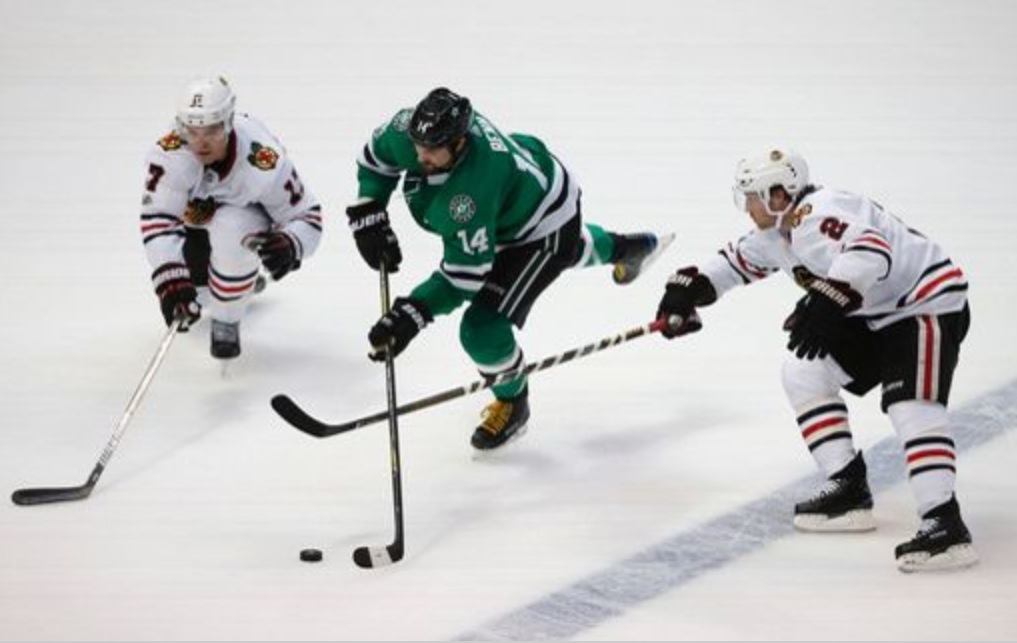 It took overtime for the Blackhawks and Stars to decide a winner in Chicago on Thursday night, so why would they give the crowd in Dallas anything less?

The teams skated to a draw in the first period. Each team put 11 shots on net, and both sides scored once. Alexander Radulov scored a power play goal at 5:57 to give Dallas the lead, but the Hawks came back with a goal of their own less than four minutes later when Cody Franson put home his first of the year.

Chicago killed one of two penalties in the first. John Hayden was in the box when Radulov scored, and Duncan Keith sat for two minutes at the end of the period; two seconds of power play time from the Keith minor carried over to begin the second period.

In the second, both teams scored again. Radek Faksa scored his tenth of the season at 12:15 to give the lead back to Dallas.

With 41 seconds left in the second, Brandon Saad brought the score back to even with his tenth of the season.

Dallas put 15 shots on net in the second, aided by two more Chicago penalties. The Hawks put 12 shots on net, failing to score on a power play early in the period. Greg Pateryn went to the box with five seconds left in the second.

Chicago couldn’t convert on the Pateryn penalty either, and the third period would come and go without either side scoring. Anton Forsberg, starting for the injured Corey Crawford, stopped 29 of 31 in regulation while Ben Bishop made 30 saves in regulation.

The Blackhawks were better in overtime than they were on Thursday, but still didn’t get many good looks at Bishop. Forsberg made a few nice saves in the extra five minutes, stopping all four shots he faced in the extra session.

And on to the shootout they went.

Radulov and Tyler Seguin beat Forsberg, and Bishop stopped both Jonathan Toews and Patrick Kane to earn the second point for Dallas.

Toews led Chicago with six shots on net and picked up an assist on Saad’s goal. He won eight of 19 faceoffs in 20:58 and the Hawks’ top line was noticeable – something that hasn’t been the case in some recent games. But Richard Panik skated only 11:17 and failed to put a shot on net again as his struggles continue.

Artem Anisimov skated 20:47 with three shots on net, three blocked shots and won 13 of 26 at the dot.

Gustav Forsling led all Chicago skaters with 24:38 on the ice. He spent 2:16 on the power play and 3:24 on penalty kill duty as his role continues to grow. Forsling was credited with three shots on net in the loss.

The Hawks fly home tonight and host the LA Kings at the United Center on Sunday night.