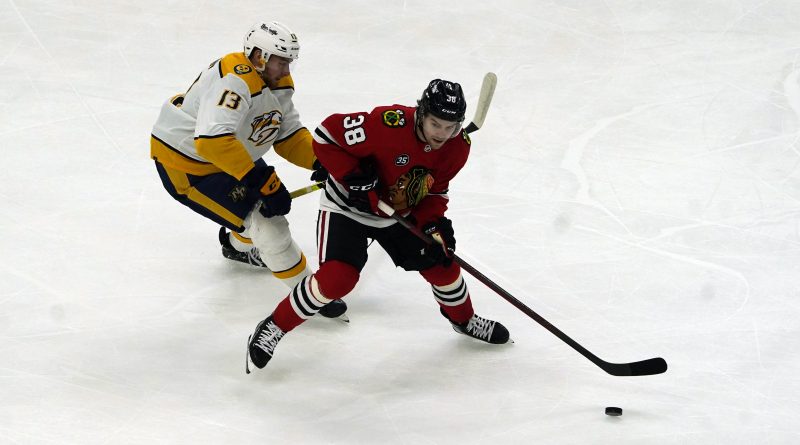 After two offensively improved performances, the Blackhawks hosted what was left of the Nashville Predators on Friday night. The Preds came in down seven players and their entire coaching staff because of COVID; Matt Duchene was also missing because of an injury.

Also on the lineup for Chicago: newly acquired forward Kurtis Gabriel, who was brought in to add some muscle to the lineup. We’ll get our evaluation of his performance out of the way early: he sucks. Shouldn’t be on an NHL roster. He might have been trying to be physical, but he was going to get credited with bumps more than hits. He’s slow and doesn’t handle the puck well at all. He’s wasting a roster spot at the NHL level that a younger player should have.

Now, on to those who can play at the NHL level. Well, in theory.

Thomas Nosek scored his first career NHL goal for Nashville on the power play almost 12 minutes into the first period. Two minutes later, the Blackhawks were able to tie the game at one.

Kirby Dach’s fifth of the year came off assists from MacKenzie Entwistle and Dominik Kubalik. That line was effective in the first period and set up the Hawks’ first scoring chance.

Unfortunately, the Blackhawks didn’t generate many scoring chances in the first 40 minutes.

The first period ended with the Predators holding a 9-6 shot advantage. Chicago was short-handed twice in the first period and failed on their only power play.

The second period ended with the two teams closer to curing insomnia than scoring a goal. The Blackhawks had three power plays in the second; the middle of the three was cut short when Patrick Kane was sent off, giving Nashville their only advantage — albeit just 30 seconds — of the middle stanza. The Preds out-shot the Hawks 15-6 in the seconds period.

After two games that showed the Blackhawks’ offense might be coming around finally, Chicago managed 12 shots in 40 minutes on home ice against a team without any of their NHL coaching staff and eight NHL regular skaters. If not for Fleury the Hawks could have been chasing a one or two-goal deficit.

Chicago killed a Connor Murphy penalty late in the first half of the third period and the Hawks’ offense continued to be absent. And, as is usually the case when a team is banged up and desperate and hanging around a game, the Preds got the next goal. Colton Sissons, who was picking fights and taking cheap shots throughout the night, was able to slip a puck through Fleury with 8:27 left in regulation.

At the time of Sissons’ goal, Philipp Kurashev had four of the Blackhawks’ 16 shots on net in 52 minutes of hockey. That’s not the way to win a game in the NHL.

The Blackhawks’ next shot was a great one. And it was on the mark.

Jonathan Toews won a faceoff and found some open space. Riley Stillman attacked the net and found Toews with a perfect pass that Toews buried in the back of the net to tie the game at two.

The goal was Toews’ third in four games and extended his point streak to four games.

With just under three minutes left in regulation, the Blackhawks got a power play. The alleged advantage, Chicago’s fifth of the night, was a gong show. No shots.

The final minutes of regulation rolled off the clock with the game still tied at two and we headed to overtime. Chicago came into Friday night undefeated in six overtime/shootout games since Derek King took over as head coach.

Fleury stopped 28 of 30 in regulation; his teammates put 19 shots on net, 17 of which were stopped by Saros.

Stillman had a busy 16:25 in regulation including two blocked shots, an assist on Toews’ game-tying goal and a team-leading seven hits.

Unfortunately, the overtime didn’t last one minute. Jake McCabe jumped over the boards to replace Seth Jones and blew a tire as he joined the rush in the offensive end. He couldn’t catch up with Tanner Jeannot who scored the OT game-winner for Nashville.

NOTE: the Blackhawks’ game on Tuesday against the Florida Panthers has been postponed because of Florida’s COVID issues.