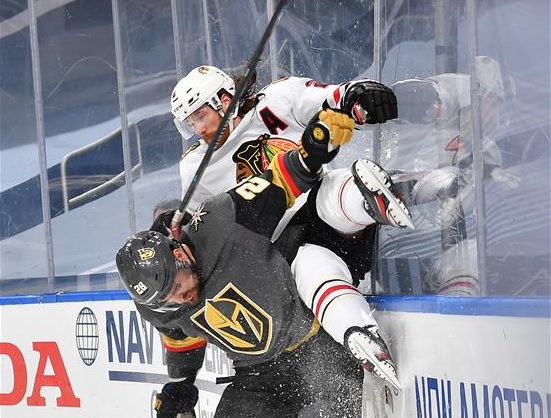 After the Vegas Golden Knights rolled to the top seed in the Western Conference during their round robin play, the Blackhawks were set to face a familar face. Robin Lehner, traded to Vegas by Chicago during the season, would battle his former teammates.

Chicago did a good job at the dot in the first period, winning 65 percent of the faceoffs. But they were out-shot and Vegas was able to control the puck more than the Blackhawks would like. After one period the game remained tied at zero.

Vegas came out and dominated the first half of the second period. Shea Theodore got the Golden Knights on the board at 7:22. Two minutes later William Carrier extended the lead to two but it appeared Ryan Reaves was offside. Jeremy Colliton challenged the play but lost; the score remained.

On the penalty kill following the lost challenge, the Blackhawks got on the board. Brandon Saad made a magnificent play to strip the puck and set up David Kampf for the short-handed goal.

Chicago started to turn the momentum while short-handed but had to kill almost four full minutes. Kirby Dach joined Dylan Strome (who was serving the challenge penalty) in the box for a few seconds. The Hawks were able to kill both penalties and started to do a better job attacking.

Lehner was losing more skate blades than rebounds, unfortunately. After 40 minutes of hockey the Hawks were down to 58 percent at the dot and had been out-shot 21-14. Chicago had only one high-danger scoring chance through two periods.

The next goal would be a big one and it went to Vegas. Reilly Smith put a shot on net that hit Corey Crawford in the shoulder and popped over Chicago’s netminder and into the net. The bad goal extended Vegas’ lead back to two.

Vegas went back to dominating the action and controlling the puck. Chicago was chasing far too much and they paid for it.

Smith struck again less than five minutes later, exploding up the ice past Patrick Kane and making the deposit. Jonathan Marchessault made a nice pass to set Smith up for the second time in the third period.

The Blackhawks were now chasing three in the middle of the third.

Chicago failed to score on the power play. Kane hit the post while Dach was in good position in front of the net but the Hawks didn’t get another good look despite Vegas having a defender lose his stick in the closing seconds.

The Blackhawks simply couldn’t generate any offense (as the shot chart below painfully illustrates) and the Golden Knights skated away with a Game One victory.

Jonathan Toews skated 17:26 and won 13 of 20 faceoffs with two shots on net. Patrick Kane was on the ice for 20:55 and put one shot on net. That isn’t going to be enough against this Golden Knights team.

Dominik Kubalik led the Hawks with five shots on net in 16:08.

Crawford stopped 29 of 33 but would like at least two of the goals against back.

Duncan Keith was the only Hawks defenseman to skate more than 20 minutes in the game (23:40). He was minus-four in the game.

Chicago blocked 13 shots and won 55 percent of the faceoffs but were out-shot 33-20. There was far too much one-and-done from the Blackhawks’ offense in the game and the result showed which side dominated the puck.

82 thoughts on “Smith, Golden Knights Shoot Down Blackhawks In Game One”