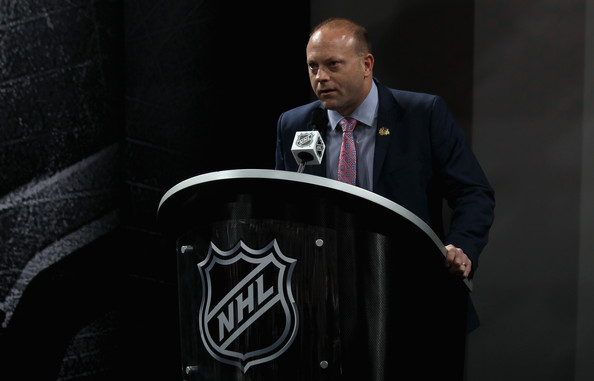 Here are some of Stan Bowman’s comments to the media from before tonight’s Stadium Series game at Soldier Field about the upcoming trade deadline. “No, we’re not focused on the deadline…  We’re really happy with the team we have.  We made a couple moves right before going to fix some depth at forward.  Early on we picked up Jason LaBarbera, and we made our big move back in November [adding Kris Versteeg].  We did that intentionally to try to get a player in for a longer period of time.”

“I think sometimes it’s hard for guy comes in for a couple weeks and then you jump into the playoffs and you can’t get him acclimated to your system and the way you play and who you’re going to play with.  So we’re not looking at that at all.  We’ve got a great group here.”

“We added Peter right before the Olympics, and I think we want to try to bring in a little depth up front.  You know, he’s been a versatile player and his couple years that he’s been in the NHL he’s played at mostly center.  This year the Islanders were using him at left wing.  We like his speed and I like his skill level.  I think he’s an offensive player, but he’s got some responsibility to his game as well.”

“I think [Regin] complements the style of hockey that we play.  We’re always trying to bring guys in that are going to fit with our system and not try to change their game.  But I think he can just play his game and hopefully he’ll get a chance to show that.”

“I think with young players there’s always areas of the game they have to improve on, and when they reach that point there’s never a magical moment.  I think it’s a process…  Same thing with Jeremy Morin.  They’ve both been up?and?down a couple times and each time they come back they seem a little bit more prepared to do the things that you have to do at this level.

“[Pirri and Morin] are dominant at the American League level…  The whole reason we have the system that we have here is that they get a lot of repetition in the American League so that they’re continuing to improve their game.  The {IceHogs] in general has had a great season; they’ve really been on a roll.  I think what we’re trying to do is give those guys a chance when they’re not in Chicago to play big minutes and prepare themselves for when the time comes and when they’re here.”

“When [Jokerit’s] season finishes, [Teräväinen]’s in the mix to play on the National Team for the World Championships.  But I guess hypothetically if he’s free and clear to come over, we’d certainly bring him over. He had a great World Junior tournament when the Finn team came all the way and won the gold medal.  But he’s really taken off since that point.

“I think when he left here in October, he [got off to] a little bit of a slow start.  He had missed some games while he was in training camp with us; it took him a little bit to get going.  I think he started playing well in December, and ever since the World Junior tournament he’s been dominating.  He’s been scoring every game.  He’s the leading scorer of the team even though he hasn’t played as many games as other guys.

“I was speaking to Barry Smith, our player development guy, and Barry’s over in Finland right now.  He was with him the other night, and he said that they named him captain.  Their captain went down with an injury, so Teuvo took over as captain, which is remarkable for a 19?year?old kid over there in the biggest league, and he’s really dominating.”

“The nice thing for us with Teuvo is we don’t need to rely on him, even if he does come over.  He’s not going to be the focal point of our team.  I think at that age you have to be careful you don’t put your expectations too high.  He’s just going to be another player if he comes in.  But he certainly has the talent to be able to play with high?end players here.”

“We’re not counting on anything, but if it works out, it would be a great addition.”