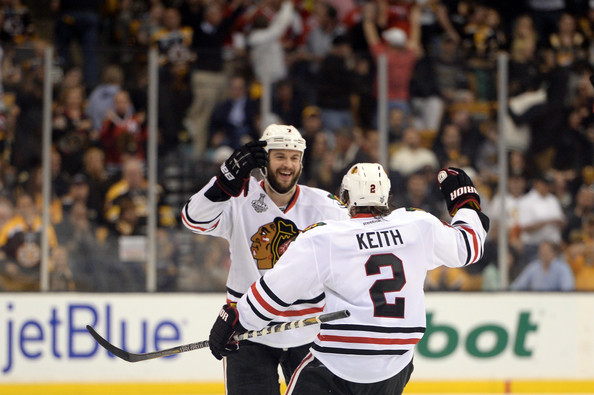 After scoring 12 goals in the first three games (13 periods) of the Stanley Cup Final, the Blackhawks and Bruins combined to score 11 in Game Four.

Thankfully, the final tally came off the stick of Brent Seabrook, and the Hawks will return to the United Center on Saturday night with the Final tied.

Everything that had come to be expected from these two teams was thrown out the window in Game Four.

Corey Crawford and Tuukka Rask had been fantastic through the first three games, and both continued to play well through the first 20 minutes on Wednesday night. But the second period brought fireworks that the Final hadn’t seen, and the back-and-forth scoring was electric.

The Blackhawks had been fantastic on the penalty kill all year, but especially in the postseason. And they continued to be good as the first period began. Chicago got on the board just under seven minutes into the game when Michal Handzus put a gorgeous pass from Brandon Saad home for a short-handed goal.

But just under eight minutes after Handzus scored, Rich Peverley scored a powerplay goal for the Bruins to tie the game. It was the first of two powerplay scores for Boston in the game; the Hawks had allowed only five powerplay goals in the first 20 games of the 2013 postseason.

Also a departure from a Final trend, Jonathan Toews scored a goal! Yes, that deserves some excitement, because it was only the second goal of the postseason for Chicago’s captain.

Toews played a much better all-around game on Wednesday, winning 16 of 30 faceoffs with one hit and one takeaway. He continued to be a presence around Rask, and was able to tip home a Michal Rozsival shot to give the Blackhawks a 2-1 lead early in the second.

Back on a line with Toews, Patrick Kane scored 2:08 after the Toews’ marker to put the Hawks up 3-1. Bryan Bickell and Rozsival were credited with the assists on the goal, making Rozsival the first of three Blackhawks to have a multi-point night; Kane and Bickell had the assists on Seabrook’s game-winner.

Milan Lucic scored to bring the Bruins back to 3-2 at 14:43, beating Crawford on his glove side… which would come to be Crawford’s glaring (big enough to be identified by NASA) weakness on the night.

However, 49 seconds after Lucic scored, Marcus Kruger put a rebound behind Rask to push the lead back to two goals. It was Kruger’s third of the postseason, keeping him ahead of Toews on the leaderboard.

Unfortunately for the Hawks, it took only 1:50 for the Bruins to answer again. Patrice Bergeron scored Boston’s second powerplay goal of the night, giving Zdeno Chara two assists in less than three minutes.

Bergeron scored again 2:05 into the third to tie the game off a pretty pass from Jaromir Jagr. Jagr also had the secondary assist on Bergeron’s first goal.

A parade to the penalty box in the middle of the period led to another Final (make that season-long) trend being discarded.

Of course, the Hawks didn’t score when skating 4-on-3,or during a brief 5-on-3 after the Toews penalty expired. But Patrick Sharp was rewarded for another night of hard work with a powerplay goal (yes, the Hawks scored with the advantage) at 11:19 in the third.

Sharp had a game-high eight shots on net and was also credited with four hits and two blocked shots in the game.

But, once again, Boston answered quickly. Johnny Boychuk scored only 55 seconds after Sharp to tie the game at 5-5. Boychuk’s goal, like the four before it, beat Crawford’s glove with ease.

The Hawks carried the play for much of the third period, out-shooting the Bruins 16-8, but the game went to overtime for the third time in the Final.

At 9:51 in the first overtime, and for the second time in the postseason, Seabrook scored the game-winner.

Nick Leddy dressed for the game, but skated only four shifts; he was on the ice for only four seconds after the second period ended.

Certainly there is cause for concern from Crawford’s performance, but both teams had glaring holes exposed. The Blackhawks pushing the tempo and scoring six goals on the road after they were shut-out in Game Three showed a lot of mettle.

Game Five is at the United Center on Saturday night.