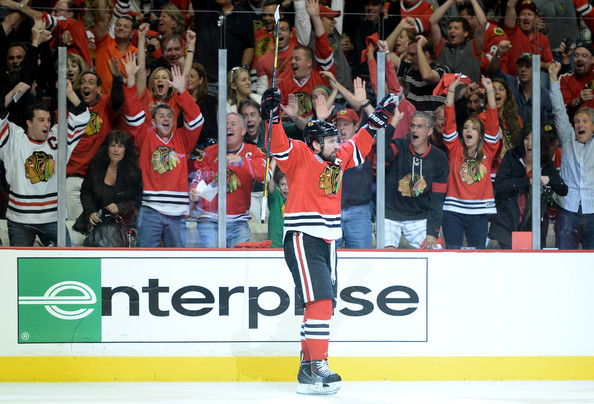 Because 60 minutes just isn’t enough, the Blackhawks played into overtime for a third straight game.

Unfortunately, this time they came up on the losing end of the ledger. And the Stanley Cup Final will head to Boston with the series tied.

Daniel Paille scored over 13 minutes into the first overtime to give Boston the victory. He also assisted on Chris Kelly’s goal for the Bruins, a significant improvement after Paille was minus-two in over 20 minutes of ice time in Game One.

The Blackhawks dominated the first period, out-shooting the Bruins 19-4 and holding a 1-0 lead.

But Boston out-shot Chicago 8-4 and 8-5 in the second and third periods, respectively, and tied the game in the second. The Hawks let the Bruins hang around long enough that they were able to score a dirty goal on only their seventh shot of the night, and that tied the game.

The longer Game Two lasted, the more the Hawks looked tired on the ice; their opportunity to put a big number on the board was wasted in the first period, and from there the Bruins were able to get back in the game. And their netminder was a big part of their ability to stay close.

Tuukka Rask has been magnificent in the Final. He stopped 33 of 34 shots on Saturday night after stopping 59 of 63 in Game One; he has a .949 save percentage in the Final, and has been the best player in the series for Boston.

For Chicago, Corey Crawford allowed only two goals against 28 shots. He has now allowed five goals against 82 shots in the series, good for a .939 save percentage.

Andrew Shaw played another strong game up front for the Hawks, leading the team with four takeaways and tying Brent Seabrook for a team-high of six hits.

Patrick Sharp, who skated on a line with Michal Handzus and Patrick Kane, was electric for most of the first couple periods and, before the Bruins tied the game, had as many shots by himself as Boston had as a team.

Game Three is Monday in Boston.