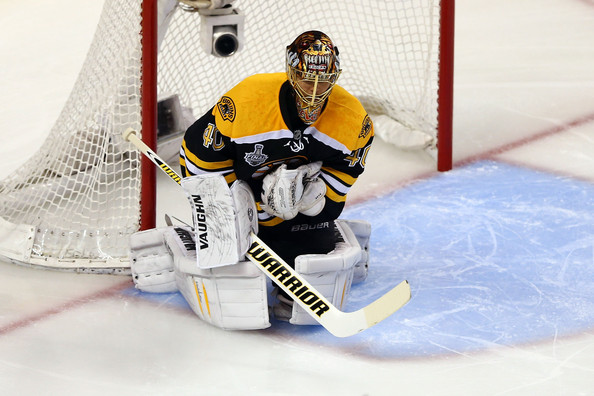 The box score will credit Tuukka Rask with a shutout of the Blackhawks in Game Three of the Stanley Cup Final, but the dominance by Boston was complete. Chicago was supposed to have only one lineup change for Game Three; Viktor Stalberg returned to the lineup after Brandon Bollig skated in the first two contests at the United Center. But Ben Smith was asked to replace Marian Hossa after Hossa took part in pregame warm-ups.

After the game, a number of Hawks players indicated the team knew all day that Hossa was questionable. Coach Joel Quenneville said the injury was not suffered during warm-ups.

The absence of Hossa wasn’t the sole factor that the Blackhawks lost on Monday night, though. They got their tails whipped in every facet of the game, and will have to regroup before the series continues on Wednesday night.

Patrice Bergeron scored the Bruins’ second goal and had a fantastic game. Not only did he lead the Bruins with seven shots on net, but he won an astounding 23 of 27 faceoffs as well.

Perhaps finishing behind Jonathan Toews for the Selke rubbed him the wrong way?

Toews tied Patrick Kane for the Hawks’ team-high with four shots on goal and won eight of 18 faceoffs, but his scoring struggles continue.

The Bruins out-shot the Blackhawks 35-27. They killed all four Blackhawks “power” plays, while scoring on one of their four opportunities. They out-hit the Hawks 31-25, and had six takeaways to Chicago’s two.

There wasn’t a good line in the box score for the Hawks in the game.

Dave Bolland took three penalties, all of which were both avoidable and unnecessary. He won only one of eight faceoffs.

If Bolland’s night was bad, Michal Handzus was a disaster at the dot. Handzus lost all ten of his faceoffs and skated only 11:51 in the game.

In his return to the lineup, Stalberg played only 10:50 and was (somehow) credited with two hits. He also did a nice job of watching Zdeno Chara beat on Bryan Bickell late in the game, a brawl that led to Bickell and Chara receiving roughing minors and Andrew Shaw and Brad Marchand receiving fighting majors with only 11 seconds left in regulation.

Smith, who wasn’t in the lineup until after warm-ups, led the team with two blocked shots but skated only 13 shifts.

The only two Blackhawks that had a good effort in the game were Patrick Sharp and Cory Crawford.

Sharp had the best offensive chances – and energy – for Chicago in the game. He was credited with only two shots on net and two that missed the mark.

For Crawford, stopping 33 of 35 shots wasn’t good enough. He had a strong game, keeping a lifeless Hawks team in the game in spite of bad penalties and defensive zone turnovers, but the Bruins were too good to miss every time. Crawford has now stopped 110 of 117 shots in the Stanley Cup Final, a .940 save percentage.

On the other end of the ice, Rask has been the best player in the postseason and clearly the most dominant player in the Final. In the three games of the Final, Rask has stopped 119 of 124 shots for an incredible .960 save percentage.

If there’s a source of hope for Blackhawks fans, it’s the reality that this is only the second time the team has been shut out in 2013. The other: Game Four against Detroit, also a 2-0 loss on the road.

How did Chicago respond? Winning their next five straight and eight of their next nine.

Unfortunately, these Bruins present a much stronger test than the Red Wings.