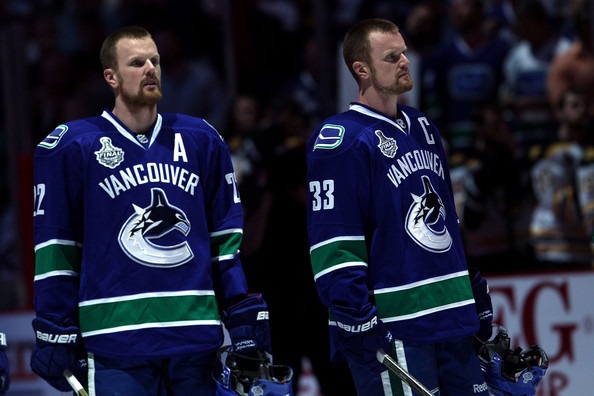 While most fans of the Chicago Blackhawks agree in their strong dislike of the Vancouver Canucks, history tells us that the Hawks are directly responsible for the success of their rival. Rewind to May 16, 1999. Bob Murray was then the General Manager in Chicago, and the Blackhawks were coming off a 70-point season that left them tenth in the Western Conference.

However, Murray had the great fortune of winning the NHL Draft lottery. What this meant was that the Blackhawks would select fourth in that year’s draft, moving up from seventh. When the lottery finished, Murray immediately got a phone call.

It was Brian Burke, then the GM in Vancouver.

The big story heading into the 1999 NHL Draft was two twin brothers from Sweden named Daniel and Henrik Sedin. There were a number of good prospects that year, but the intrigue was that the Sedins wanted to play together. Most analysts were convinced that both Sedins would come off the board in the top four picks, and Vancouver, specifically Burke, wanted to make the twins’ dream come true.

Vancouver already owned the third pick in that year’s draft, and needed to add another pick to get both of the twins.

After some negotiating, Burke convinced Murray to trade out of the fourth overall pick. Vancouver sent a conditional first round pick (in either 2000 or 2001) and defenseman Bryan McCabe to the Blackhawks for the pick.

Burke then did was Burke does: he continued dealing. The fourth overall pick, with the 75th and 88th overall selections, were then traded to the Tampa Bay Lightning for the top overall pick. Burke then moved down out of the top spot, throwing in a conditional third round pick to convince the Atlanta Thrashers to take the number one overall pick.

When the Thrashers too Czech center Patrick Stefan with the top overall pick, Burke’s dealing was a success: Daniel was taken second, and Henrik third overall.

The first round pick the Hawks received from Vancouver in the trade ended up being the 11th overall pick in the 2000 Draft, which the Hawks then wasted on Pavel Vorobiev.

At the end of the day, a number of dominoes had to fall into place for both of the Sedins to end up in Vancouver, and the first was the Chicago Blackhawks moving the fourth overall pick. 3 thoughts on “Stanley Cup Finals: Why the Chicago Blackhawks Are Responsible for the Vancouver Canucks Success”