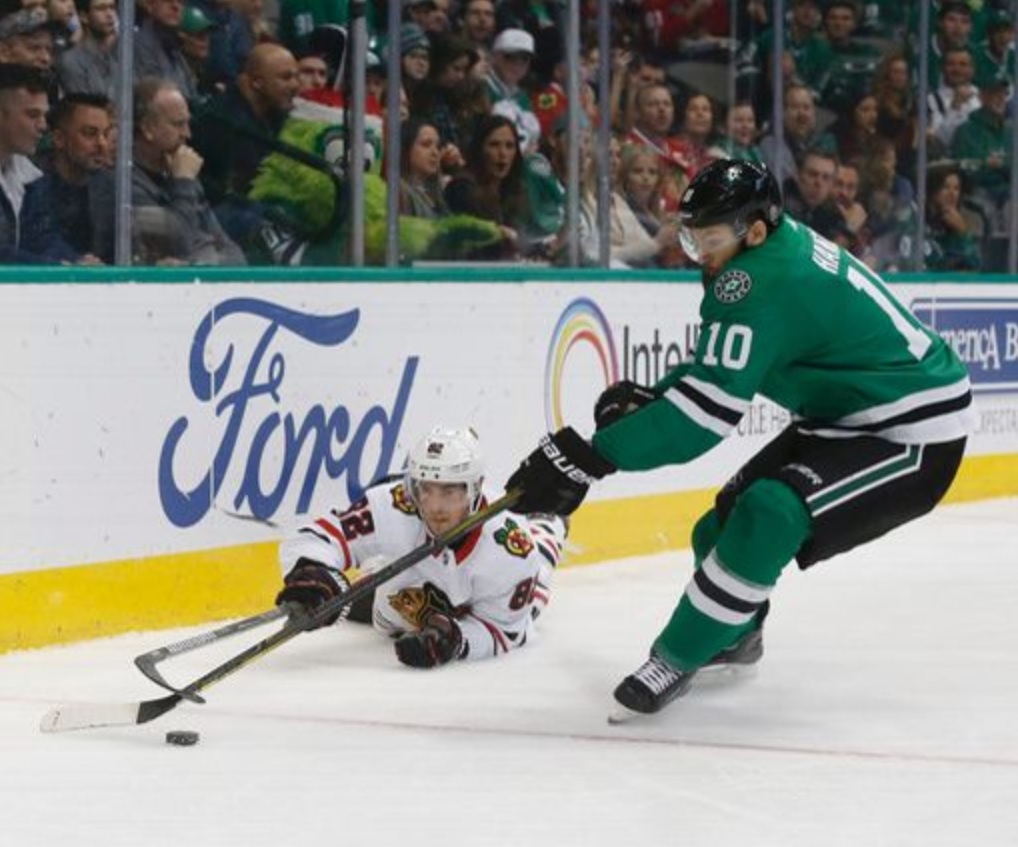 The Dallas Stars came into Thursday night’s game against the Blackhawks struggling, and their coach had his eyes on a milestone.

The Hawks countered by putting Richard Panik back in the lineup, leaving Patrick Sharp out of the lineup.

In the opening 20 minutes, Chicago got their tails whipped at the dot. The Hawks won four of 17 faceoffs in the opening 20 minutes. There was only one penalty called in the period; Tommy Wingels took a seat for two minutes after tripping Radek Faksa at 15:08. Chicago killed the penalty, but Jamie Benn scored his 15th of the season to give Dallas a 1-0 lead three seconds after Wingels left the box.

Chicago had an 11-7 shot advantage after 20 minutes but were outplayed and physically dominated.

Things got worse in the second.

Antoine Roussel, a well-documented turd, extended the lead to 2-0 just 67 seconds into the middle stanza. Roussel tipped a Dan Hamuis shot and Corey Crawford didn’t have a chance on the play.

Ryan Hartman was guilty of tripping 5:06 into the second and the Stars took advantage of the power play. Tyler Seguin picked up a loose puck after Connor Murphy blocked a Jason Spezza shot and rifled it past Crawford to give the Stars a three-goal lead.

Ten minutes later, Seguin was back at it again. He knocked a loose puck into the net for his second of the period to give Dallas a 4-0 lead.

The second period finally ended with Chicago only getting six shots on net, none of which tested Ben Bishop. Crawford allowed three in the period, none of which were clean. Dallas was credited with only nine shots on net in the second.

After allowing seven goals total during their five-game win streak, the Hawks allowed four in 40 minutes in Dallas.

Compounding the Blackhawks’ issues was their inability to generate quality shots on net in the third. With ten minutes left in regulation, only two Hawks had more than two shots on goal: Duncan Keith and Connor Murphy.

Chicago got their first power play with 4:49 left in regulation after 15 minutes of Dallas toying with them. Unfortunately, the shot totals in the third period at the time of the penalty were only five for Chicago and three for Dallas. Greg Pateryn went to the box for the Stars after holding John Hayden’s stick.

Quenneville started spreading the ice time out early and kept three of his forward lines limited. Jonathan Toews skated only 14:03 despite being the only Hawks skater to do well at all at the dot. Toews won 10 of 16 faceoffs; the rest of the team won 13 of 44.

Chicago’s final game before Christmas is in New Jersey on Saturday.