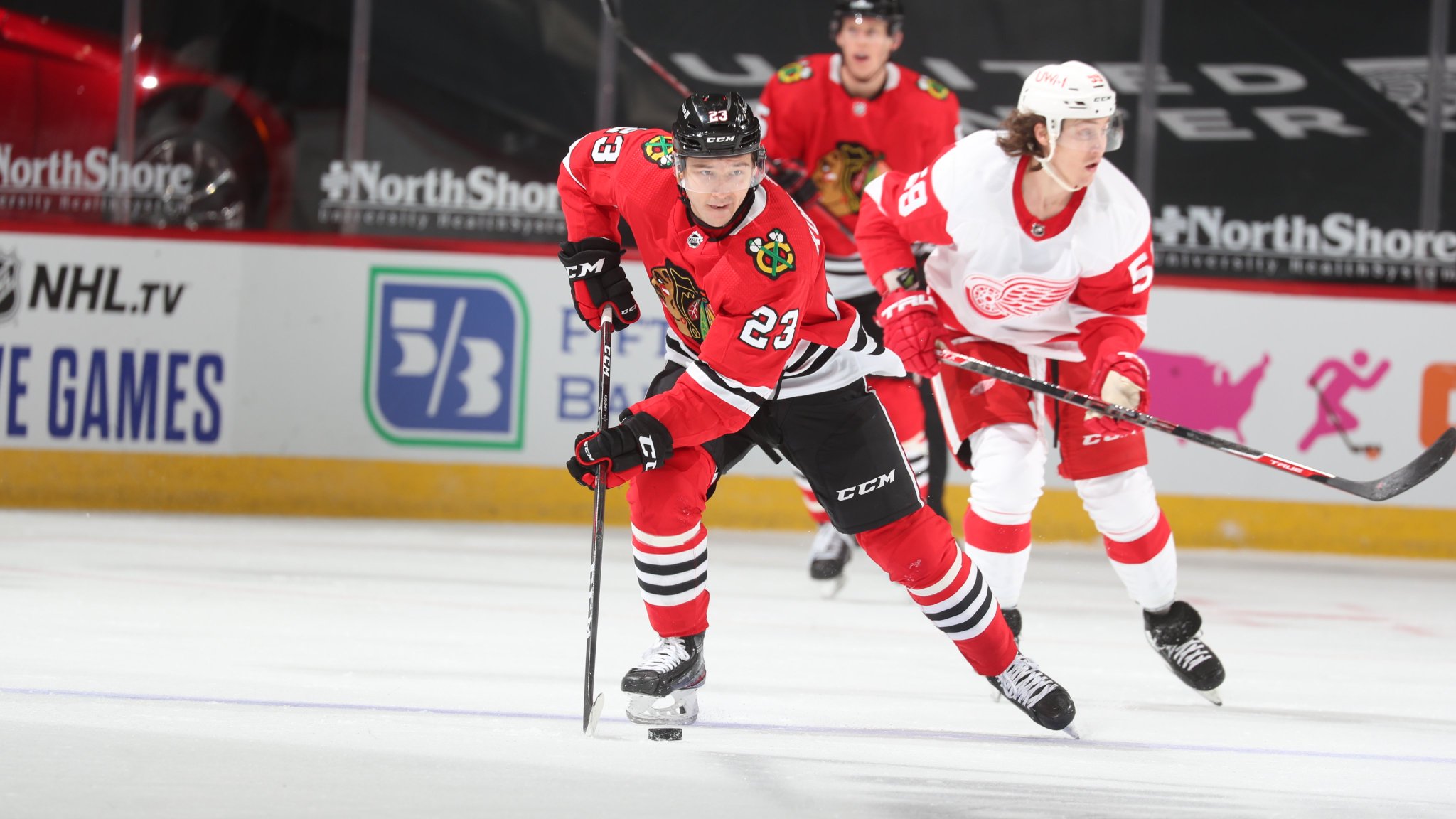 After four ugly road losses to start the season, it appears the Blackhawks needed to come home.

Chicago won its first game of the season 4-1 on Friday night and took the ice before noon for a Sunday matinee against the Red Wings. Kevin Lankinen was back between the pipes after a terrific performance, and the skaters in front of him looked to build on a good all-around performance.

The Red Wings came out absolutely flat and the Blackhawks took advantage early. Pius Suter got Chicago on the board with his first career NHL goal at 4:42 into the game. The 24-year-old rookie has looked good but hadn’t found the back of the net. It was only a matter of time, and Sunday was his time.

Chicago’s power play had scored in all five games in the new season, and kept that roll going. Five minutes after his first career goal, Suter was again the man, scoring his second goal of the year while on the powerplay.

Mattias Janmark and Dominik Kubalik were credited with the helpers on the second goal of the day.

The rest of the period was dominated by the Blackhawks. Detroit put up very little resistance and Lankinen was on point. After 20 minutes of hockey the Blackhawks had a 13-5 shot advantage and a 2-0 lead.

The Hawks started the second periodd with 67 seconds of power play left to kill but David Kampf amplified the issue with a quick penalty right off the opening faceoff. Chicago would be short-handed two men to begin the second period.

A two-man disadvantage is tough to kill, and the Blackhawks couldn’t keep the puck out of the net. Tyler Bertuzzi was able to score while both Chicago skaters were in the box and the lead was down to one 41 seconds into the period.

Kubalik came out of the box after the Bertuzzi goal but Chicago still had to kill more than one minute of power play time for Detroit.

In the closing seconds of the penalty the Blackhawks got a glorious chance but Ryan Carpenter failed to close the deal after a gorgeous pass from Janmark in front of a wide open cage. The penalty ended without a second goal but the lead could have been extended.

Detroit was able to get significantly more zone time in the first half of the second period and then the game transitioned into a lot of back-and-forth. Lankinen continued to make good saves and the Hawks continued to get chances, but Jonathan Bernier was equal to the task.

Chicago got the ever-important next goal at 17:18 when Connor Murphy found a loose pick and rifled it into the back of the net for his second of the year.

Dylan Strome and Kubalik were credited with assists on the even strength goal, giving the Hawks a two-goal lead once again.

Ian Mitchell was limited to 8:48 on the ice through two periods, again making him the sixth defenseman for Chicago. He was one of five Chicago defensemen credited with a hit in the first two periods; the Hawks’ blue line combined for 10 hits in the first 40 minutes.

Janmark was having himself a day and got the payoff 58 seconds into the third period, scoring an easy tap-in goal off a beautiful pass from Kane to give the Blackhawks a 4-1 lead.

The assists to Kane and Murphy meant both of them, and Janmark, had two points in the game.

With 8:21 left in regulation and Keith in the box, Bertuzzi scored his second power play goal of the afternoon to cut the Blackhawks lead back to two.

The two-goal lead lasted less than one minute. And Suter’s two-goal game ended at the same time when he sniped home his third of the day, giving him the Blackhawks’ first hat trick of the 2021 season.

Kane grabbed the puck for Suter after he got on the sheet three times for the first time in his NHL career.

Pius Suter is the first Blackhawk to score his first three career goals in the same game since Bill Kendall did so in 1933.

Because five hasn’t been a positive number for the Hawks this season, they had to get off the spot. Philipp Kurashev scored with 4:05 left in regulation to make the score 6-2 in favor of the Hawks.

The beatdown was in full effect.

Detroit put up little resistance the rest of the way and Chicago skated away with another solid victory.

Lankinen was terrific again. In two games against Detroit he stopped 55 of 58 shots for a .948 save percentage.

Carl Soderberg made his Blackhawks debut. He skated 13:48 with one shot on net, one blocked shot and two hits while winning four of nine faceoffs.

Murphy was plus-four in the game. Suter led Chicago with five shots on net.