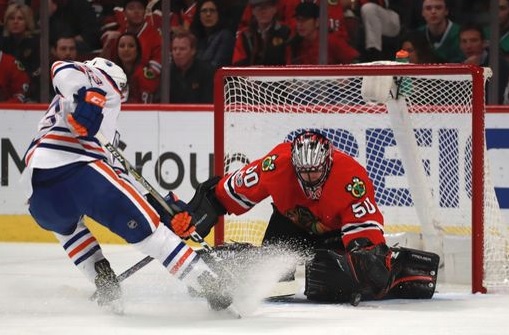 Across the NHL, teams have come back flat from their week off.

That wasn’t the case in Chicago on Saturday night, but the Edmonton Oilers still captured two points against the well-rested Hawks.

The Blackhawks came out firing in the first period of Connor McDavid’s United Center debut, but weren’t able to beat Cam Talbot. Chicago held a 12-4 shot advantage through 20 minutes and Jonathan Toews hasn’t lost a faceoff in eight attempts.

Two big hits on Tanner Kero and a fight highlighted the second period. The first time Kero got absolutely hammered was by Eric Gryba three minutes into the second. Ryan Hartman chased him down to stand up for his teammate. The two dropped the gloves and, despite having significant disadvantages in both height and weight, Hartman held his own.

Hartman was given an extra two minutes (instigator) and a ten minute misconduct for the fight, and Edmonton made the Hawks pay… sort of. Matthew Benning shot a puck at the front of the net and it was kicked past Corey Crawford by Trevor van Riemsdyk to give the Oilers a 1-0 lead.

Without Hartman for 17 minutes the Blackhawks still out-shot the Oilers 16-9 in the second period. Again, Talbot was magnificent for 20 minutes. Edmonton carried the action more than the shot totals would indicate, however, and they carried that into the third.

Edmonton controlled the action early in the third and Milan Lucic extended the lead to 2-0 at 9:50 into the final period.

Five minutes after the Lucic goal, Richard Panik picked up where he left off a week ago.

Panik and Toews executed a perfect give-and-go and Panik beat Talbot to get Chicago on the board with 4:47 left in regulation.

The assist on Panik’s goal was the 600th regular season point in the career of Chicago’s captain.

Edmonton took their timeout with 2:10 left in regulation and the Blackhawks countered by pulling Crawford. Chicago’s netminder had a much better night than 19 saves would indicate; he robbed Connor McDavid a couple times and had a handful of exceptional saves to keep the game close.

Chicago burned their timeout with 42 seconds left in regulation after an extended shift with the Hawks’ top group on the ice.

Unfortunately, Crawford wasn’t on the ice to rob McDavid with 27 seconds left, and the Oilers’ young superstar scored into the empty net to put the game away.

Credit has to be given to Talbot for the win; he stopped 38 of 39 earn the win.

Toews won 19 of 24 at the dot with four shots on net, one blocked shot, one hit and one takeaway. van Riemsdyk and Michal Kempny led the Hawks with two blocked shots each, while Duncan Keith led Chicago with six shots on net. Brent Seabrook had a team-high four hits.

18 thoughts on “Talbot, Oilers Hang On In Chicago”