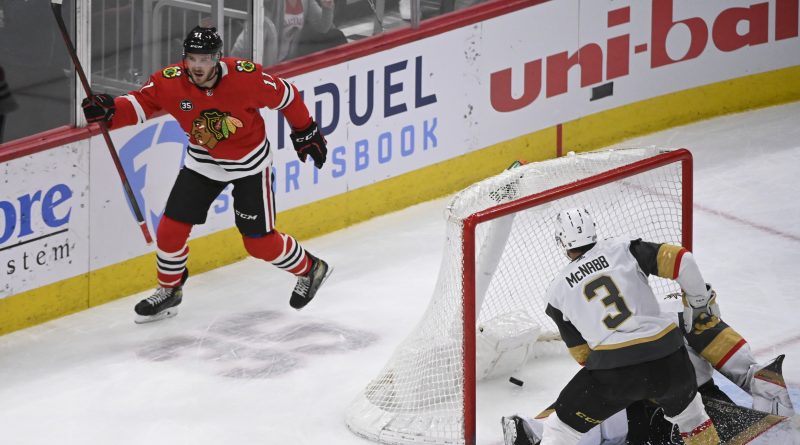 The Vegas Golden Knights ventured into the United Center for the Blackhawks’ home finale. Unfortunately for them, it was the finale of their playoff chances.

Vegas lost in Dallas on Tuesday night and then flew to Chicago and looked like a defeated team in the first two periods. The visitors needed to win out and get some help, but Dallas sprinted to a three-goal lead early against the Coyotes and the Knights were struggling to keep up with the Blackhawks. Their loss in Chicago means their offseason begins at the same time as the Blackhawks this year. Taylor Raddysh was the show in the first period. He gave the Blackhawks a lead with a nice goal at 16:01 into the first.

Vegas tied the game at one 98 seconds later, but Raddysh gave the Blackhawks the lead in the closing seconds of the first with his second goal of the period.

Sam Lafferty had assists on both of Raddysh’s goals. He’s been a really nice addition with a physical edge since being acquired from Tampa. Chicago out-shot Vegas 16-15 in the opening 20 minutes and took a one-goal lead to the room.

Alec Martinez tied the game at two less than four minutes into the second period, but the score stayed even for just 66 seconds until Caleb Jones scored his fifth of the year.

The fact that it was Caleb’s fifth of the season is significant in the Jones family; he’s tied with Seth in the goals scored category.

Because we can’t have nice things, Max Pacioretty tied the game at three with 2:48 remaining in the second period. That’s where the score remained as the teams went to the room for the second intermission. The Blackhawks out-shot the Knights 11-9 in the middle period. Kevin Lankinen wasn’t great, but he was playing good enough to make things interesting.

Vegas didn’t show a lot of emotion early in the third period but they were controlling the scoring chances; 11 of the first 14 shots credited on net in the third period were for Vegas. Even with a couple nice chances thanks to ugly changes by the Knights that the Hawks couldn’t convert, the shot totals were heavily favoring the Knights.

Lankinen was on his game against the increased action, though. As the third period in Chicago dragged on without a goal, the Coyotes clawed their way back to a one-goal deficit against the Dallas Stars. A comeback win for Arizona would open the door for Vegas to at least make things interesting in the final day of the regular season but…

With 4:25 left in regulation, Michael Amadio went to the box for two minutes for high sticking and the Blackhawks had a power play to work with late in a tie game.

For the second time in the game, a Blackhawks advantage came and went without a goal.

The final two minutes of regulation also ticked off the clock without incident and the teams headed to overtime. As the Knights were around their bench between the third period and overtime, fans behind their bench were showing the Vegas players that the Dallas-Arizona game was suddenly tied at three.

Caleb Jones made a couple really nice defensive plays in overtime, one taking the puck away from Pacioretty inside 90 seconds remaining in OT. The Hawks got a couple decent shots on net but nothing went in for either side, so the final game on the United Center ice this year went to the shootout.

Both goaltenders had 37 shots heading to the skills competition.

Jonathan Toews shot first in the shootout and went wide. Mark Stone shot first for Vegas and was denied by Lankinen.

Patrick Kane shot second for Chicago and he missed as well; he had an open cage and just popped it over the net. Lankinen shut down Jack Eichel, however.

Alex DeBrincat stepped over the boards third and was rejected with a poke check. Shea Theodore shot third for Vegas but was rejected.

Philipp Kurashev was called out fourth for Chicago and shot it right into the goaltender’s chest. Chandler Stephenson shot high for Vegas and we continued.

Dylan Strome was up next for the Hawks but he, too, was told no dice. Pacioretty was next for Vegas but he got nothing.

Raddysh shot sixth for the Hawks but was denied. Jonathan Marchessault was rejected by Lankinen.

Tyler Johnson was seventh for the Blackhawks and he was able to score. Amadio was denied by Lankinen and the Blackhawks won their home ice finale — two straight in Chicago — and Vegas’ playoff dreams were officially dead.